Ahiflower: The richest non-fish source of omega fatty acids on the planet

(Natural News) It’s always nice when new discoveries are made that can provide a pure and potent source of nutrition that hasn’t been made widely available yet. In the case of the ahiflower, this is new ground being broken and the masses can take advantage by using it to build up their crucial omega fatty acids, without the contamination or inconveniences of other popular sources.

Ahiflower (Buglossoides arvensis) was once considered a weed but is now grown as a sustainable agricultural crop. Not only that, but it produces the only plant-based, non-GMO dietary oil that has a higher metabolic conversion to EPA than ANY of the other popular omega-rich plants such as hemp, flax, chia, perilla, sancha inchi, and echium. With a well-balanced combination of omega-3, -6, and -9 fatty acids, this could be one of the greatest developments in the world of omega supplementation since the introduction of fish oil.

The best part is, there appears to be no drawbacks, unlike with many other omega supplements.

The problem with many omega supplements

Arguably one of the most popular supplements today, fish oils have dominated the omega market for decades. Once considered the premium way to get omega-3s, we have since learned that they may not have been all that they were cracked up to be.

First of all, the oceans (and other bodies of water) are well known to be contaminated with mercury, and this toxic element has been shown to bioaccumulate in the bodies of fish. Mercury is a toxic metal, and even traces of it in fish oil can cause damage to your internal organs and neurological system. (Find out how to limit this contamination, here.) Secondly, although there has been talk that fish-derived omega-3s preserve marine species, studies have found that farming fish for supplements actually decreases the supply and diversity of fish. Thirdly, most fish oil supplements offer just one or two omegas at a time, but studies have shown that you need to take them altogether in a balanced ratio to get the most health benefits. Lastly, many fish oil supplements are not preserved properly, which can result in rancidity due to the easy break down of fish oil sitting on store shelves.

This is why the discovery of ahiflower becomes so important, as it effectively eliminates all those issues.

Omega fatty acids have many benefits, and being able to obtain them from a sustainable, pure, and balanced plant source is of serious significance. Omega-3s have been known to support a healthy nervous and cardiovascular system, as well as vision and bones. Omega-6s are important for proper growth and development, healthy heart function, energy, and immunity. Omega-9s support healthy immune, cardiovascular, nervous, and reproductive systems.

Being able to maximize the potential of each one of these fatty acids in a single plant based source is a victory for anyone looking to improve their overall health, including vegans looking for an optimal and convenient source without any animal tissue. 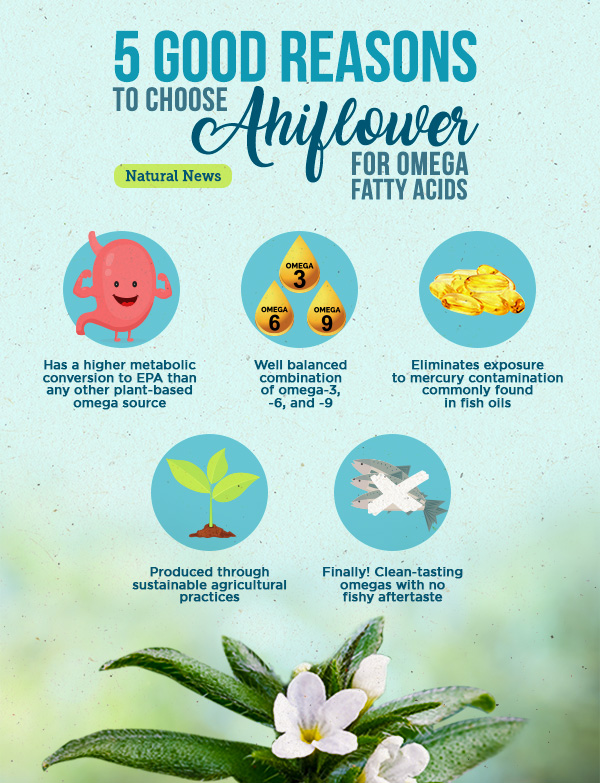 It is still early for this once lowly weed now turned omega powerhouse, but the stat sheet looks extremely promising for those who rely on omega supplements for their well-being. Fortunately, you can get your hands on some with Chief Originals Ahiflower Softgels, now available in the Health Ranger Store with a high level of purity and potency.

Say good bye to the fish burps and heavy metal contamination, and say hello to a smarter way to get your omega fatty acid intake.

Previous :3 healthy “switch-outs” of toxic household products that can help protect the health of you and your family
Next : Nine ways to experience the magic of Manuka honey
Receive Our Free Email Newsletter