Four major mineral deficiencies, their symptoms, and how to overcome them

(Natural News) You may think that in a society where food is abundant and starvation is relatively rare, that nutrient deficiencies would be a non-issue. However, in many parts of the world, including North America, nutrient deficiencies are extremely common and are often responsible for many of the symptoms and diseases people are facing today.

So how do these deficiencies occur in a world that has plenty of food to go around? Turns out, there are a lot of intertwining factors.

Why mineral deficiencies have become a silent epidemic

Have you been one of the lucky ones to avoid ALL of these? Chances are you have been subject to all of them, and without specific attention to rectifying it, you are still dealing with the consequences of a mineral deficiency.

You can get a better idea if you are suffering, by noting the mineral deficiency symptoms below.

Symptoms of a mineral deficiency

A deficiency in this mineral can cause many issues, due to it’s overall importance in the body. It’s not surprising that many people deal with it, as chronic stress will deplete it, and the most absorbable forms of it are largely lacking in the diet (leafy greens). Nuts, legumes, and seeds are good forms, but unless you properly prepare them and have incredible digestion, unlocking beneficial amounts of magnesium becomes a difficult task.

Some early signs of magnesium deficiency include:

If not addressed, these symptoms could become worse, and show up as the following symptoms:

You may also notice increased cravings for chocolate as it is a magnesium rich food. Green leafy vegetables and properly prepared nuts and seeds are also good sources.

Another common mineral deficiency that can have disastrous consequences for your health is iodine deficiency. According to Dr. Brownstein, revered expert and author of the book Iodine: Why You Need It, Why You Can’t Live Without It, 94.7 percent of 500 patients he tested were deficient in inorganic iodine.

Signs you are in a serious iodine deficiency include:

If you crave salty foods, that is another nod that you may be dealing with an iodine deficiency. To replenish iodine stores, think about a high quality sea salt and seaweed. 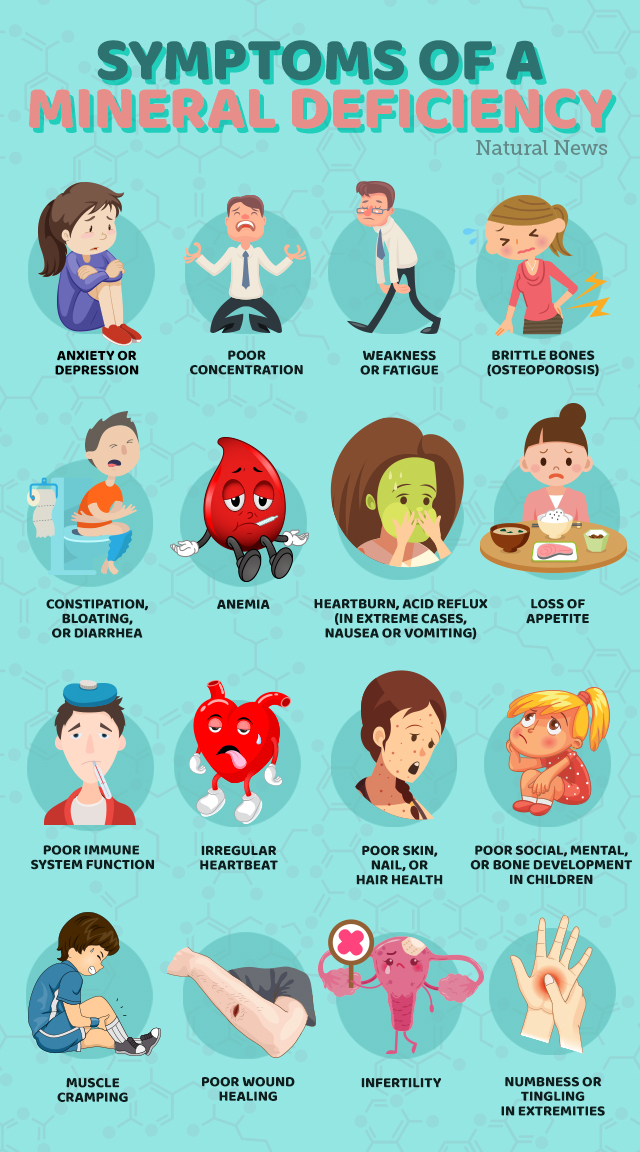 Without proper iron levels in your blood, oxygen delivery in your body is severely compromised. This can eventually result in anemia, which will leave you feeling weak and tired on a daily basis. It can also negatively affect social and cognitive development.

If you find you like to chew on ice, that is also a signal you may be iron deficient.

Special note: Drinking coffee can inhibit iron absorption, and as a result, can exacerbate an iron deficiency issue.

Zinc is an essential mineral for proper immune system function, and a deficiency can lead to the following symptoms:

You can get quality amounts of zinc from properly prepared nuts and seeds (pumpkin seeds are an excellent source), oysters, grass-fed beef, and free-range organic poultry.

There are certainly many other mineral deficiencies, but these are very common and have a high level of importance due to their requirements in the body. To help rectify a mineral deficiency in a tasty morning beverage, try the Magical Morning Remineralization Recipe.

Previous :Big pharma doesn’t want you to know about this potent healing food
Next : The most potent food source of vitamin C on the planet and how it can supercharge your health
Receive Our Free Email Newsletter

Age like fine wine: Tips for healthy and successful aging
Octogenarians who walk at least an hour every week reduce their risk of dying from all causes by 40%
Surprising study: Drinking up to three cups of ground coffee daily may help you live longer
Study: Getting enough vitamin D every day helps reduce diabetes and heart disease risk
Olive oil consumption found to reduce risk of death due to cancer, heart disease and Alzheimer’s
Study: Consuming apples, oranges and strawberries can help people with Parkinson’s disease live longer
Study: Walking for an extra 10 minutes daily can increase your life expectancy
Berry good: Researchers discover lifespan-extending compound in blueberries
Sunshine and fat burning: Research suggests vitamin D is crucial for your metabolic health
The Dr. Hotze Report: Rapamycin offers significant health benefits to just about everybody – Brighteon.TV