Nicotine 101: The science behind the ADDICTION and QUITTING for good

(Natural News) We start this one off with some interesting facts about nicotine and its continued use. There are 35 million smokers in the US, and there are 15 million people who now vape. Though vaping eliminates many of the harmful chemicals embedded in cigarettes, most of the vape gadgets used by vape enthusiasts use “nic juice,” which means they also contain nicotine, the 3rd most addictive drug in the world, following closely behind cocaine and heroin.

Cigarettes are also worse than vaping because cigarette tobacco is juiced up (freebased) with ammonia to make the nicotine super strong, so over 100mg of vapor-ready drug gets inhaled, and hits the heart and brain in just three seconds. It gets worse. Nicotine use constricts blood vessels, restricting oxygen and nutrient flow, thus diminishing immune system function.

Then there are the dreaded nicotine patches and nicotine gum, both of which have only a four percent success rate at helping people quit smoking or vaping for good, yet somehow, together, those “quit methods” maintain a $5 billion dollar market each, worldwide. The Biden Regime is trying to ban menthol, but not cigarettes, in a head fake move to pretend to be helping black smokers, who prefer menthol 3 out of 4. They’ll just switch to non-menthol or there will be a black market created for menthol (no pun intended). But wait, there’s some good news.

True physical nicotine addiction is broken in just 3 to 4 days, after that, it’s all just mental and behavioral modifications

The famous author Mark Twain once wrote, “Giving up smoking is the easiest thing in the world. I know because I’ve done it thousands of times.” That’s why the nicotine patch and gum manufacturers make so much money, because people keep using them for years, unable to quit, but repeatedly trying to. Every nicotine user has a different experience during their withdrawal days, and chain smokers may have even more “intense” periods. It all depends on three key factors: overall health, mindset and nutrition.

The problem with the patch and gum is they PROLONG the nicotine withdrawal phase because they still contain nicotine, even if it’s less than what is in a cigarette or typical vape gadget (electronic cigarette).

Dopamine is a neurochemical that is highly influenced by nicotine, fueling mood enhancement and emotional “reward.” That’s why it’s easy to become depressed and stressed while trying to quit, because normal dopamine levels are not reached without the nicotine delivery device doing the “trick” for you. The problem is this artificial, drug-induced dopamine surge is very short-lived, only lasting between 20 to 40 minutes, then it fades quickly.

Over time, tolerance to nicotine is built up while natural reservoirs of the neurotransmitter dopamine are depleted. How can you replenish this without continued nicotine use? That is a scientific question with a clean-cut answer.

Researchers from Baylor College of Medicine in Texas ran an in-depth study on the effects of dopamine levels caused by nicotine use and how those levels adjust during nicotine withdrawal. The clinical study was published in Biological Psychiatry (medical journal) and reveals that low dopamine levels are the number one factor that actually PROMOTE the relapse to smoking. The researchers discovered that dopamine levels become ABNORMAL when smokers try to stop smoking (or vaping). 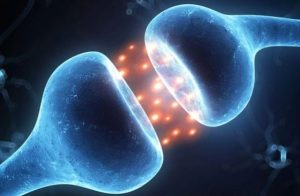 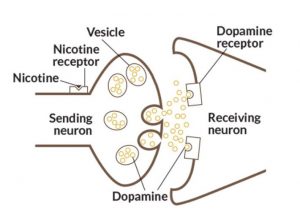 Nicotine use literally ‘hijacks the reward system’ in the human body and brain, commented a doctor who edits the psychology journal, saying the low levels of dopamine during withdrawal trigger the pursuit of abused substances. So then, how do you cure low dopamine production in the body without using nicotine?

Drawing from the conclusions of the Baylor Medical College study on dopamine levels being the main cause of nicotine relapse, it only makes sense to find a natural remedy that can boost dopamine levels, and avoid nicotine altogether. That’s what we do at Natural News, we research and investigate natural remedies and indigenous cures for everything under the sun.

All natural Krave Kicker, a “shot” beverage made with supplements and superfoods, is one tool on the belt for quitting naturally, without using “lesser” drugs, or prescription drugs, or anything else with side effects and continued addictions. Natural remedies may be wise to consider, and boosting dopamine levels has been proven by scientific research and analysis to be very effective for ending nicotine addiction for good.

Also, buy some organic nuts, seeds and fruit for that hand-to-mouth habit, and go outside for fresh air frequently when you would have otherwise used nicotine. Also, be sure to engage some light, enjoyable exercise, like long brisk walks or swimming, now that the weather is improving. The rest is mental. Stay positive and surround yourself with people who support you and your healthy choices.

Tune your internet dial to StopSmoking.news for updates on how to quit the third most addictive habit on the planet. You can do this! Natural remedies and indigenous cures are the key to the rest of your healthy life.