(Natural News) If you’re new to the Paleo diet and you want to switch to other milk alternatives, consider trying camel, coconut, or nut and seed milk. These alternatives contain various nutrients, with the added benefit of having less fat than cow milk.

Camel milk is a good Paleo alternative to cow milk because it’s a superfood with anti-diabetic properties. Full of nutrition, this milk also contains immunity boosters like human breast milk.

Camel milk tastes similar to goat milk. However, while the latter is mildly tart and salty, the latter is sweet enough if you like drinking milk. Often used in Arab cuisine, camel milk is a staple of nomadic cultures since it has a long shelf-life even in non-temperate conditions. It contains calcium, essential fatty acids, phosphorus, potassium, protein, and vitamin B1.

The milk is suitable for people with dairy allergies or intolerances since it has a low lactose content. Camel milk doesn’t have A1 casein protein and lactoglobulin that’s found in cow’s milk, making the former easier to digest.

When buying camel milk, look for products that come from pasture-raised camels that are fed soy- and corn-free diets. Make sure the camel milk that you’re buying doesn’t have added hormones or antibiotics.

Coconut milk is a favorite among Paleo dieters because it is full of nutrients. The milk has almost 92 percent saturated fat content and a high level of medium-chain triglycerides (MCTs). Coconut milk can even help decrease ulcer sizes, fight bacteria and viruses, and reduce inflammation.

Some experts believe saturated fat is unhealthy, but the those found in coconut are vastly from saturated fat that comes from animal products. Data from a 2006 study on coconut fats consumed by the Sri Lankan population has revealed that coconuts are easy to metabolize for energy because it has medium chain fatty acids that haven’t undergone degradation and re-esterification processes.

Unlike milk that comes from animals, coconut “milk” is made by blending coconut meat and coconut water. The mixture is then simmered, and the pulp is strained out. Sometimes, a small amount of sweeteners (e.g., honey or maple syrup) is added to the milk.

You can also make your own coconut milk. This way, the final product has all of the healthy fats while it is as minimally processed as possible.

Coconut milk is often canned, but a lot of brands have non-Paleo additives, particularly the “light” versions, with artificial sweeteners, stabilizers, and water. You can also get thinner coconut milk in the refrigerated section of natural foods stores and grocery stores that are similar to traditional dairy. Avoid brands that may have a lot of non-Paleo additives.

Coconut cream is another derivative of coconut milk that’s popular among Paleo dieters. Coconut cream has a higher ratio of coconut meat to coconut water, so it’s thicker, richer, and more luscious. You can get it at most health and specialty food stores, online, and in the Asian foods aisle of some grocery stores. If you don’t have access to coconut cream, chill a can of full-fat coconut milk in the fridge overnight. In the morning, scoop out the cream that separates from the liquid for makeshift coconut cream.

Use coconut milk to give a creamy finish to curries, soups, and stews. Water down canned coconut milk for your cereal or add it to Paleo overnight oats. 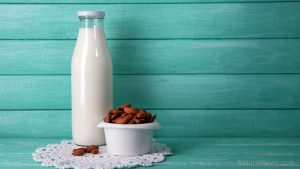 Nut and seed milk are commonly made from almonds, cashews, hazelnuts, pistachios, or hemp seeds. Similar to coconut milk, nut milk is made with nuts and water.

To minimize the additives in your milk, you can make nut milk at home to retain the essential nutrients with minimal processing. To make your own nut milk, soak your choice of nuts, blend them with water, then drain the pulp.

The nutrition of a nut milk will depend on what kind of nut it’s made from. Since the meat of any nut is lost in the pulp straining process, this kind of milk has fewer calories and nutrients compared to eating the nut itself. Nut milk is also less pungent in flavor, unlike coconut or camel milk, with a slight hint of the nut’s actual flavor.

Major nut milk brands add unnecessary ingredients to thicken, emulsify, and boost the flavor of the milk. However, some brands keep the ingredient list minimal so always check your local natural foods or specialty shops.

Nut milk is milder, making them the perfect base for smoothies. Use dates or vanilla bean to boost the flavor of nut milk. When baking, use a thicker, creamier nut milk such as cashew milk. You can also bake using a mixture of 50 percent coconut milk and 50 percent nut milk.

Consider using camel, coconut, or nut or seed milk if you want to try more nutrient-rich alternatives to cow milk.

Previous :Here are 5 science-backed benefits to quitting drinking
Next : Why you should keep on exercising even if you have back pain
Receive Our Free Email Newsletter