(Natural News) Sometimes, even the most pro-choice people on the planet have a hard time denying the reality that their unborn child is a living human being inside of them.

Hollywood couple John Legend and Chrissy Teigen tragically lost their third child due to pregnancy complications on October 1. In their mournful social media posts about the horrific loss, they revealed themselves as a pro-life family, if only for a moment.

The Grammy award-winning singer and his model wife very much treated their unborn baby “Jack” as a very real, and very human part of their family from the moment they found out Teigen was pregnant.

During the early hours of Tuesday, October 1, Teigen posted heartbreaking photos of her and husband John Legend dealing the loss of their third child during pregnancy. According to the model’s caption, she indicated that her child died due to extensive bleeding after multiple blood transfusions failed to save him.

Teigen wrote, “We are shocked and in the kind of deep pain you only hear about, the kind of pain we’ve never felt before. We were never able to stop the bleeding and give our baby the fluids he needed, despite bags and bags of blood transfusions. It just wasn’t enough.”

It’s not clear how far along in the pregnancy Teigen was, but media were under the impression she had suffered a miscarriage. Though that’s the term for the death of an unborn child before 20 weeks of pregnancy due to malformation in the womb. All we know for sure is that Teigen had publicly confirmed that she was having a baby boy just only a couple weeks ago.

One of the most poignant and heartbreaking portions of Teigen and Legend’s Instagram post was when the family claimed they had known him by name in the womb as soon as they found out he was conceived. Teigen clarified that this was the first time they had felt that kind of bond with an unborn child. 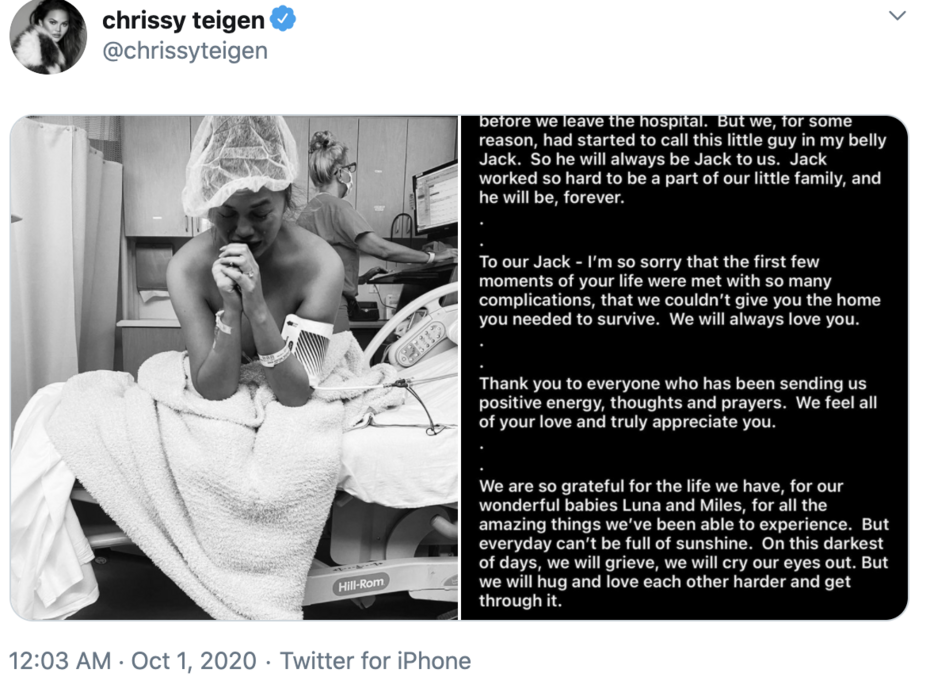 Teigen lamented, “We never decide on our babies’ names until the last possible moment after they’re born, just before we leave the hospital. But we, for some reason, had started to call this little guy in my belly Jack.  So he will always be Jack to us.” It’s clear that as an unborn baby, Jack was a very real part of the Legend family.

“Jack worked so hard to be a part of our little family, and he will be, forever,” Teigen added.  She then addressed her unborn son directly, writing, “To our Jack – I’m so sorry that the first few moments of your life were met with so many complications, that we couldn’t give you the home you needed to survive.  We will always love you.”

They should take solace in the fact that they may see him again in the light of God’s presence someday.