They want us dead if Trump wins, and to punish conservatives if Biden wins

If Joe Biden wins the 2020  presidential election, then liberals feel Trump supporters should be penalized, “re-educated,” “removed from society,” and Trump media supporters should be forced to face a “Truth and Reconciliation Commission,” to re-program those that do not follow the radical liberal ideology.

If President Trump wins, they want blood in the streets, civil war and to burn down the nation.

Anyone that thinks those statements are hyperbolic, need only to listen to their screeds, threats, assertions and actions.

Below we will see a few examples of just how insane this has all gotten.

RANT: TRUMP SUPPORTERS NEED TO BE REMOVED FROM SOCIETY

We’ll start with Keith Olbermann, former ESPN pundit (fired multiple times), left the network (on his own this time) to take to his YouTube channel to rant and rave, every day, about President Trump, offered up one of the most unhinged video commentaries we have heard in a very long time, on October 8, 2020.

“So, let us brace ourselves,” he continued, saying, “The task is two-fold: the terrorist Trump must be defeated, must be destroyed, must be devoured at the ballot box, and then he, and his enablers, and his supporters, and his collaborators, and the Mike Lees and the William Barrs, and Sean Hannitys, and the Mike Pences, and the Rudy Gullianis and the Kyle Rittenhouses and the Amy Coney Barretts must be prosecuted and convicted and removed from our society while we try to rebuild it and to rebuild the world Trump has destroyed by turning it over to a virus.”

That quote can be heard at around the 8:40 minute mark, but the entire rant is a wonderful example of how very crazed these people are getting.

Another attack against conservatives comes from social media, where multiple pundits are pushing for the creation of what they call a “Truth and Recinciliation Commission.”

The most humane and reasonable way to deal with all these people, if we survive this, is some kind of truth and reconciliation commission. 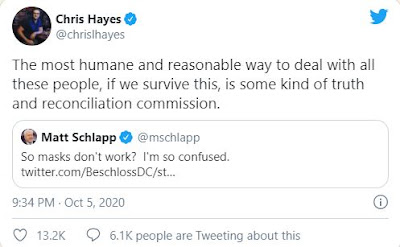 When this nightmare is over, we need a Truth and Reconciliation Commission. It would erase Trump’s lies, comfort those who have been harmed by his hatefulness, and name every official, politician, executive, and media mogul whose greed and cowardice enabled this catastrophe. 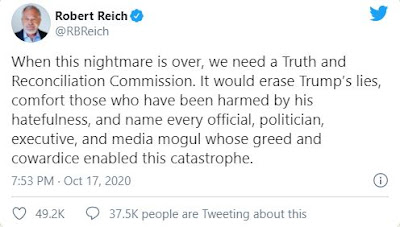 Notice how many batcrap crazy people “liked” and retweeted that nonsense, and you begin to see these are not outliers, these are the mainstream Democrats now.