(Natural News) An adult women’s clothing store that caters to females interested in “clubwear” has launched a new apparel line for young girls that overtly sexualizes them.

Fashion Nova describes the highly revealing outfits as “trendy fits for the stylish kid,” but observers say the trashy garb is not much different than what was portrayed in the Netflix pedophilia film Cuties.

After seeing some of the “fashion” poses on Twitter, one user commented that she would never dress up her toddler “like a grown a** adult.”

“This is taking it WAY to [sic] far, these are the same people who think it’s cute when their kids sing WAP & s*** or do the sexualized Tik Tok dances #fashionnovakids,” this same user added.

Another asked who she needs to call “to stop this exploitation and sexualization of our babies.”

“I have been disturbed about this since I woke up and discovered it this morning,” she added. “Fashion Nova you so far outta line … Sooo disturbing. Throw the WHOLE site away.”

Even Angela Stanton King, who is running for a congressional seat in Georgia, tweeted that it is time have a conversation about this obscene new clothing line for little girls. She followed up her tweet with the hashtag #saveourchildren, a derivative of the #savethechildren hashtag that was banned by Facebook for spreading “misinformation.”

More related news about the sexualization of America’s youth by shameless corporations can be found at Evil.news. 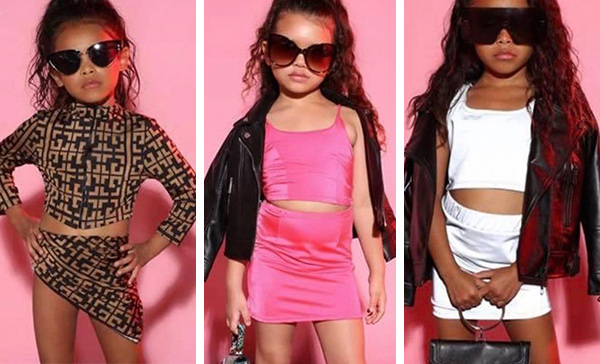 Cardi B, Joe Biden’s mouthpiece, is a brand ambassador for Fashion Nova

Since Fashion Nova’s children’s line of clothing was launched right around the time when Netflix launched Cuties on its streaming platform, many could not help but notice the correlation.

“Pedophiles are having a field day,” one Twitter user wrote.

Another, a sexual assault survivor, stated that upon viewing Cuties, which features outfits that are very similar to those now being sold by Fashion Nova, it brought her “back to a moment when [she] was abused and overtly sexualized as a child.”

Many celebrities are “Nova Ambassadors” for Fashion Nova, it turns out. Kourtney and Khloe Kardashian both rep the brand, as does Kylie Jenner, the daughter of former Olympian Bruce-turned-Caitlyn Jenner.

Cardi B, who infamously interviewed Joe Biden during a recent digital appearance, is another Nova Ambassador who hawks the brand in exchange for cash. This makes sense in light of Biden’s own affinity for young girls.

The whole thing reeks of Pizzagate and other alleged pedophilia networks that are increasingly coming out of the woodwork into the open. Fashion Nova apparently has no qualms about contributing to this scourge of human trafficking by parading around young girls in scantily clad outfits for profit.

“As kids in the tens of thousands will likely be wearing Fashion Nova clothes, watching Cuties on Netflix, listening to Cardi B’s music and reading her sexually deranged tweets, this cultural trend could be the precipice of a new status quo that may not go back to normal for years to come,” warns Humans Are Free.

We will not post any of the photos here, but one Twitter user summed them up by explaining that the children all have blank stares, similar to adult models, are standing in “diva-ish poses with wet n wavy hair,” and some are also wearing sunglasses, which is uncharacteristic of most young children.

“The photo shoot did not capture the innocence of kids,” this same user concluded. “They captured little divas. It’s not cute at all.”

For the rest of the story about Cuties and the connection to Joe Biden, be sure to check out our earlier coverage on the subject.

More news on Cardi B

Fashion Nova launches what looks like a pedophile clothing line for little girls
Cardi B, the dumbest pop star alive, is bagging interviews with Joe Biden and Bernie Sanders as the Left’s token black