This is why Christians across America should NEVER vote for Joe Biden: Joe Biden is a DANGEROUS pathological liar who doubles down when he’s called out on a lie by blatantly lying again!

(Natural News) Evangelical Christians voting for Biden is as strange as a five-hundred-pound girl doing a backflip or an orangutan doing a tap dance. But then evangelicals have been leaning left for decades since they made their break with biblical reliability. And a rule of life is, one always falls the way one leans. It seems they fell to the left and “can’t get up.”

In 1942, some heavyweights and many lightweight Christian leaders decided to cut their fundamentalist roots and identify as scholars, not pulpit banging “come-outers” who were “against everything.” They wanted to be recognized as religious scholars, responsible leaders, but not resolute separators. They did not want to identify with Biblicists, who refused to approve, associate, or align with non-believing church leaders.

These new Evangelicals could get along with anyone with a cheap cross around the neck and any Bible version in hand. They wanted everyone to know that they believed the Bible (but not excessively); after all, they were well-paid spokesmen (spokespersons) for its teaching. However, they wanted everyone to know that they were no longer identified with those Christians who were outspoken, clean living, independent, and even occasional Bible thumpers.

So the Evangelicals who are the most vocal, and visual, and even vile are the ones who hate President Trump and love Joe Biden.

The Pro-Life Evangelicals for Biden website reads like an anemic attempt to justify their support of Biden’s approval of abortion by suggesting racism, poverty, climate change, lack of health care, etc., also kills. Well, possibly, but not one and a half million a year and not as quick and definite.

Evangelicals for Biden website assures us, “Joe Biden is a man like any other, but his character and faith set him apart in times of crisis. That’s why Evangelical Christians across the country will be voting for him in November.”

At least, with crude, rude, and lewd Trump, innocent babies are safe within the womb; our soldiers are coming home from the endless wars in the Middle East; the promised wall is being built; age-old adversaries in the Middle East are making peace; the economy is bouncing back after dubious lockdowns; unemployment is quickly receding; and tremendous strides are being made with the judicial system except for those insane governors who release rapists and killers to rape and kill again.

And moronic religious leaders are asking thoughtful citizens to vote for Joe Biden since he is so “decent,” “honest,” and a “man of faith!” Are we discussing the Joe Biden I’ve known for decades?

The Joe Biden I know is a confirmed, confessed, and a calloused liar.

He started lying and cheating as early as his college days, and he has repeatedly been found to be a plagiarist that has followed him all his political life. Joe was kicked out of law school for taking five whole pages from another writer to use in a required essay. He said it was a mistake. How does a person, even a Democrat, use five pages from someone else and call it a “mistake.”

No, it was thievery.

These clips of Biden’s plagiarism are devastating. It should quickly destroy any candidate for dogcatcher. He has been caught with his pants down numerous times taking quotes from Bob and Jack Kennedy, Hubert Humphrey, and many others. Frankly, it’s pitiful. 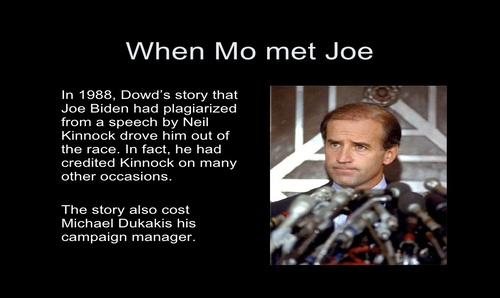 Joe has tried to present himself as a very active civil rights leader but without success. One of the most avid racists does a better job than I in exposing Biden. Shaun King wrote, “Biden told wild tales of how he marched, sat-in, and boycotted during the Civil Rights Movement and even went so far as to suggest that he had traveled to Selma and Birmingham with such actions, but with his campaign in tatters, he finally said they were all lies.”

That is an assessment of Joe from the far, far left.

King continues as he quotes Biden’s boast of being a civil rights worker, “Folks, when I started in public life, in the civil rights movement, we marched to change attitudes … I remember what galvanized me … Bull Connor and his dogs … I’m serious. In Selma.” Joe’s voice drops to an Hollywood whisper. “Absolutely. Made. My. Blood. Run. Cold. Remember?” King adds, “But Joe Biden had never seen such things with his own eyes. Turns out, Joe had been telling those lies for years.” He never marched. He never sat in. He lied about participating in sit-ins that did not happen for a least a year later.

Please remember Biden was debunked about his civil rights activities by a far-left activist. Even The Hill reported that Joe’s assertion that during the Obama administration, they “didn’t lock people up in cages” was a lie. He also declared, “Immediately, the moment [the Iraq War] started, I came out against it.” He lied. He voted for the resolution to go to war in Iraq. And he said, “I was always labeled one of the most liberal members of Congress.” He lied all three times, as admitted by Politico.

Joe told the inspiring story of being arrested while in South Africa when he tried to visit Nelson Mandel in prison, but the incident did not happen.