The countdown has started: Liberal insanity levels over the next ten days will reach a fevered pitch as the Senate confirms Amy Coney Barrett for the Supreme Court

(Natural News) FLASHBACK: For anyone on the internet, or that reads the news, or watches their local news on television, it is impossible to forget the spectacle of the Brett Kavanaugh confirmation to the Supreme Court hearings.

The interruptions, screaming, complaining, whining, constant demands to delay the hearing….. and that was all just from Democrat Senators.

Things got much worse when the hearings actually began, as liberal protesters gathered outside the building, chanting, wearing those God-awful red and white “Handmaiden’s Tale”  outfits, with claims that having Brett Kavanaugh Supreme Court would strip the rights from women, turning them into nothing more than slaves.

The hyperbole was unbelievable, and the antics inside the hearing room tuned the entire process into a circus show. Men and women having to be dragged or carried out by Senate security after heckling the proceedings, and screaming in protest, holding up protest signs and in one unforgettable instance, a man, dressed as a woman with a bright red substance down the front of his groin and legs. 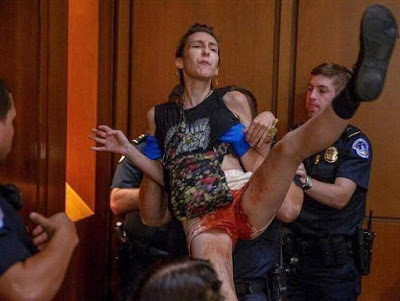 Though expedited, the process will follow the same framework as the previous two Supreme Court confirmation hearings under the Trump administration, Graham said on Fox News.

That means Barrett’s hearings will last four days, during which she will give opening statements, field questions from Senators and listen to testimony from outside witnesses.

“The nominee will be challenged, and that’s appropriate to challenge the nominee, but if they treat Judge Barrett like they did Justice Kavanaugh it’s going to blow up in [Democrats’] face big time,” Graham said.

Democrat politicians have just about done everything in their limited power to derail the hearings start date, but as the GOP is in control of the Senate, and the House of Representatives have no say whatsoever in the confirmation process, there is not much Democrats can do except whine, complain and throw temper tantrums.

Of course the establishment media is offering them every platform opportunity possible to do so.

Welcome to the beginning of round two: Ding! Ding! DING!

THE ATTACKS AGAINST CONEY BARRETT HAVE BEGUN

With Kavanaugh, Democrats dugs deep and attempted to derail his confirmation by bringing forth a woman, Christine Blasey Ford, who claimed the three decades earlier, while Kavanaugh was in college, he inappropriately touched her.

Democrat leaders pulled more people from under the rocks, all much less credible and not one with any type of proof or evidence whatsoever.

Kavanaugh was confirmed and the whole country saw the underhanded and unethical tactics that were used against Kavanaugh.

Previous :It’s now looking like the lockdowns may have been a huge mistake
Next : Nancy Pelosi invests $1 million in cyber-security firm that faked evidence during Russia-gate scandal
Receive Our Free Email Newsletter