(Natural News) For those who have been hearing mysterious “bangs” and “booms,” no worries, that is just the sounds of tens of thousands liberal heads exploding, as Attorney General William Barr drops truth bomb after truth bomb and Democrats, liberals, and the media ( all the same at this point), just can’t deal.

From telling prosecutors that violent rioters can be charged with “sedition,” to taking aim at some in the DOJ, to calling the lockdowns by governors across the nation, “The greatest intrusion of civil liberties” in history aside from slavery, while taking on the Black Lives Matter movement, stating “They’re not interested in black lives,” Barr has been on a truth bombing run.

BARR: MEDIA ‘A COLLECTION OF LIARS’

On September 11, 2020, Townhall was able to get an exclusive interview with AG Barr, where he let loose some hard truths about the MSM, using the example of their coverage of the violent riots that have been seen over the last few months, in liberal cities like NYC, Portland, Minneapolis and Lancaster.

“They’re basically a collection of liars. Most of the mainstream media. They’re a collection of liars and they know exactly what they’re doing. A perfect example of that were the riots. Right on the street it was clear as day what was going on, anyone observing it, reporters observing it, it could not have escaped their attention that this was orchestrated violence by a hardened group of street fighting radicals and they kept on excluding from their coverage all the video of this and reporting otherwise and they were doing that for partisan reasons, and they were lying to the American people. It wasn’t until they were caught red-handed after essentially weeks of this lie that they even started feeling less timid,” Barr said on the flight back to Washington Friday afternoon.

“The press has dropped, in my view – and I’m talking about the national mainstream media – has dropped any pretense of professional objectivity and are political actors, highly partisan who try to shape what they’re reporting to achieve a political purpose and support a political narrative that has nothing to do with the truth. They’re very mendacious about it,” he continued. “It’s very destructive to our Republic; it’s very destructive to the Democratic system to have that, especially being so monolithic. It’s contributing to a lot of the intensity and partisanship.”

Barr then continued to give specific examples, such as CNN’s “Fiery but peaceful protest” chyron along with all the media insisting the protests were peaceful until they couldn’t get away with it anymore.

It is also being reported that Barr believes the violence may get much worse leading up the November election. 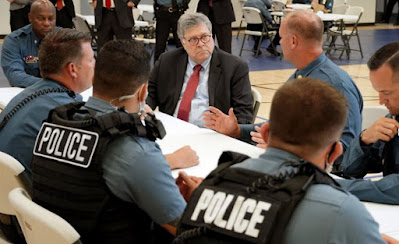 BARR: ‘VIOLENT ‘ PROTESTERS CAN BE CHARGED WITH SEDITION

It is being reported by multiple sources, including Wall Street Journal that AG Barr has informed prosecutors that they could charge violent rioters (not peaceful protesters) with sedition and other federal crimes, as federal authorities attempt to quell the violence by Antifa and BLM groups.

Attorney General William Barr told the nation’s federal prosecutors to be aggressive when charging violent demonstrators with crimes, including potentially prosecuting them for plotting to overthrow the U.S. government, people familiar with the conversation said.

In a conference call with U.S. attorneys across the country last week, Mr. Barr warned that sometimes violent demonstrations across the U.S. could worsen as the November presidential election approaches. He encouraged the prosecutors to seek a number federal charges, including under a rarely used sedition law, even when state charges could apply, the people said.

Of course the spin being pushed by media and others supportive of the violent protests is that the Trump administration is planning to crackdown on “protests,” when “peaceable” gatherings are protected under the constitution, when the topic is not peaceful protesters but arsonists and violent thugs, among others.

Previous :Jerry Brown mocks people who want to leave California: ‘Where are you going to go?’
Next : Yes, Fauci and Gates do have ties to COVID-19 vaccine maker
Receive Our Free Email Newsletter