(Natural News) Today we are calling for the arrest and prosecution of top government officials in Nashville, TN, who have now been caught red-handed covering up the very low numbers of infections at restaurants and bars in order to gaslight the public and justify draconian business closures and lockdowns.

A bombshell investigation by Fox 17, WZTV in Nashville, has uncovered once-secret emails that reveal a shocking conspiracy to deliberately deceive the public by withholding covid-19 infections statistics that would have shown that bars and restaurants are not spreading infections.

While nursing homes and construction sites were found to have produced over 1,000 cases of coronavirus infections (each), bars and restaurants reported only 22 cases, reports Fox 17. From there, the cover-up begins. As Fox 17 reports:

Leslie Waller from the health department asks, “This isn’t going to be publicly released, right? Just info for Mayor’s Office?”

A month later, the health department was asked point blank about the rumor there are only 80 cases traced to bars and restaurants.

Tennessee Lookout reporter Nate Rau asks, “The figure you gave of ‘more than 80’ does lead to a natural question: If there have been over 20,000 positive cases of COVID-19 in Davidson and only 80 or so are traced to restaurants and bars, doesn’t that mean restaurants and bars aren’t a very big problem?”

The name at the top of the response is clipped off but you may find the answer unacceptable.

“My two cents. We have certainly refused to give counts per bar because those numbers are low per site.

We could still release the total though, and then a response to the over 80 could be because that number is increasing all the time and we don’t want to say a specific number.”

Neither the health department nor the mayor’s office would confirm the authenticity of the emails but councilmember Steve Glover had a Metro staff attorney inquire. Here’s the official answer:

“I was able to get verification from the Mayor’s Office and the Department of Health that these emails are real,” the staff attorney answered.

Glover says this is Metro Nashville orchestrating a cover up.

“They are fabricating information,” Glover said. “They’ve blown there entire credibility Dennis. Its gone, I don’t trust a thing they say going forward …nothing.” 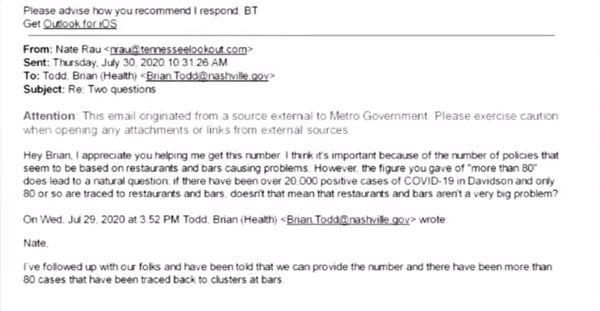 They were “managing” the propaganda to deliberately mislead the public

What these emails show is that Nashville officials — almost all Democrats, of course — were carrying out acts of criminal fraud against the people of Tennessee. They were deliberately engineering or shaping the propaganda in order to mislead the public and try to justify lockdowns and closures that could not normally be justified if they had reported the real numbers.

Brian Todd, one of the officials involved, reportedly asked five other government officials how he should “respond” to questions about the data, implying that he couldn’t simply tell the truth and wanted to know how to shape the response to mislead the public.

It’s clear that the Nashville Mayor’s office would only share “bad” information with the public, while covering up “good” numbers that might justify reopening local businesses.

This is the weaponization of government against the people, isn’t it? Instead of local government working to help local citizens overcome the economic devastation of lockdowns and closures, these government officials were acting as enemies of the local people. As if they were waging a war against them!

As Donald Trump Jr. tweeted, “The Dem Mayor of Nashville KNOWINGLY LIED ABOUT COVID DATA to justify shutting down bars & restaurants, killing countless jobs & small businesses in the process. Everyone involved should face jail time. How many other Dem run cities is this happening in?”

Everyone involved should face jail time. How many other Dem run cities is this happening in?https://t.co/8anzs5Jgba

This story shows that Nashville officials recognized the “numbers were low” for bars and restaurants and therefore decided to withhold those numbers from the public.

In a time when small businesses are being devastated by lockdowns that lead to bankruptcies, with jobs and livelihoods on the line, these Nashville government officials — who all hold cozy jobs as government workers — took actions that deliberately destroyed private sector businesses, almost like an act of BLM terrorism.

Black Lives Matter burns your business down, but Nashville officials destroy your entire revenue model, making them worse than terrorists.

Anyone who has ever wondered whether government was your enemy, look no further than Nashville.

It’s time that We the People started arresting these government criminals and tyrants who are abusing their power, lying to America and destroying local economies just so they can use the coronavirus pandemic to roll out their authoritarian schemes.

Previous :Children’s Health Defense and RFK Jr. release “message of unity” video calling for health freedom advocates to #StandFirm against vaccine mandates
Next : Thousands of people have joined Brighteon.social to exercise free speech about vaccines, Christianity, Trump and other topics that get banned by Big Tech
Receive Our Free Email Newsletter

Censorship by Big Tech is imperiling America’s democracy
Fauci and Biden together: A scientific dictatorship
Leaked Zoom calls and documents show federal workers and activists conspiring to participate in a COUP and SHUT DOWN THE WHITE HOUSE
Top coup experts training Left with revolutionary tactics ahead of election
Full story behind Hunter’s laptop debunks latest Russia conspiracy theory
Obama praises young leftists creating ‘a new normal in America’
Blaming Russia for Hunter’s problems was a big misstep, Joe, and it may prove to be your downfall
Fourth Turning election year crisis
With the Hunter Biden expose, suppression is a bigger scandal than the actual story
Big Tech alters election policies 26 times to stop ‘social media president’