(Natural News) A live air-to-air, radar-guided missile was just discovered at the Lakeland Linder Airport in Florida, East of Tampa, and the airport was ordered to evacuate. We have analyzed the markings of the missile storage container and discovered this missile is a Matra R530F missile, which uses radar guidance and could be used to bring down Air Force One or a similar-sized airplane.

This is highly relevant to current events, given that a U.S. Air Force helicopter used to help provide security to President Trump during short flights was fired upon last week, causing an emergency landing to be initiated, after which one occupant required hospitalization, according to media reports.

AmericanMilitaryNews.com is carrying the details of this radar-guided missile which was discovered in the Lakeland Linder Airport, citing both BayNews9 and ABC Action News. From AMN:

“This weekend we received a call that a contractor at Lakeland Linder Airport had discovered a guided missile. Our 6th EOD team helped secure it with the help of ATF, the Lakeland Fire Department, and our 6th LRS team who provided a flatbed semi for transportation,” MacDill Air Force Base said in a statement posted to Facebook on Monday. “It is currently sitting in a munition storage facility on base awaiting proper disposal.”

Here are some photos released by the U.S. Air Force of its disposal efforts: 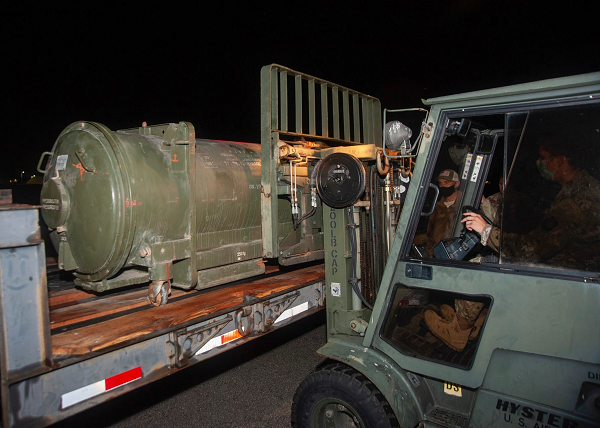 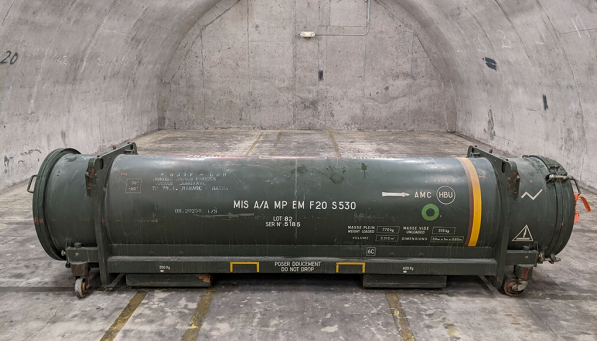 A closer look at the markings of the missile holding container reveals the serial number and missile type indicators:

According to the orange ring on the right edge of the photo above, the missile is “live,” meaning it carries live explosives. The red ring indicates the missile also contains its own propulsion fuel, which is of course a different kind of explosive.

“Lakeland Linder Airport officials eventually gave the “all clear” after the missile was taken away,” reports American Military News. “Markings on the left side of the missile’s container read “RJAF Jordan Air Forces,” indicating the missile or its container may have belonged to the Royal Jordanian Air Force.”

But wait… what’s an unaccounted air-to-air missile doing in an airport in Florida?

The U.S. Air Force giving the “all clear” misses the whole point of this story: What is a Jordanian air-to-air missile doing in a container in central Florida in the first place?

Who brought it in, and how? What is its intended purpose?

It’s not the U.S. military, obviously, or the missile wouldn’t be Jordanian. This means someone else brought it into the United States. For what purpose was it brought into the country?

One clue may be found in this 2019 article from The Aviationist, which documents the discovery of the exact same type of missile — with serial number 5284 — which was found to be in the possession of a neo-nazi extremist gang operating out of Italy.

In fact, the Polizia di Stato conducted a raid on the neo-nazis and discovered this same air-to-air missile in their possession, according to media reports. As the story explains, the neo-nazi group was trying to sell the missile to someone else for nearly half a million Euros:

The investigation began last year while monitoring Italian foreign fighters involved in combat operations in the Dombass region in Ukraine. While monitoring telephone communications of one of the suspects, the Police discovered the presence of the missile and some attempts to sell it to an unknown client for 470,000 Euro. The Police then proceeded to retrieve the missile in a warehouse near Voghera-Rivanazzano Terme airport, in northern Italy. 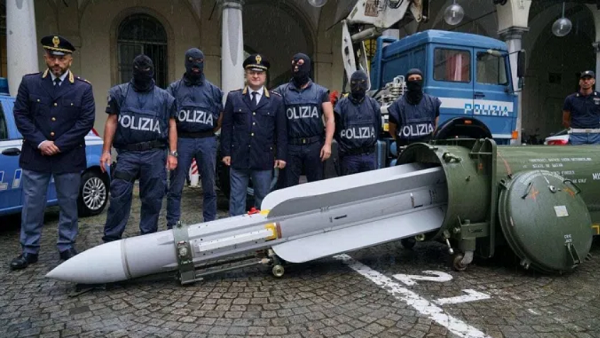 The above photo indicates that Italian police have managed to figure out how to open a missile container, which itself is something of a miracle.

As the story explains, these missiles are made by French weapons manufacturers, and they are sold to Qatar and apparently Jordan. They are intended to be fired from “Mirage” fighter jets, which are also manufactured in France.

In effect, the so-called “Super 530” missiles are intended to be fired from French-made Mirage fighter jets, for the purpose of destroying other aircraft.

Do Mirage fighter jets exist anywhere in Florida? Perhaps so. The idea isn’t as far-fetched as you might imagine. A flight entertainment company called Fighter-Jet-Rides.com offers flights in Russian Mig fighter jets, and they’re located at the Aurora Aerospace Training Facilities, not far from Tampa. It’s not difficult to imagine that someone in Florida might have a Mirage fighter jet up and running, too. (We are not intending to imply that this Mig fighter jet entertainment company has anything to do with this, merely pointing out that functional fighter jets obviously do exist under civilian control, in Florida.)

Can missiles made for Mirage fighters be fired by other military aircraft? We don’t know. But with time to modify the interface, it certainly seems feasible that some well-funded anti-American terror group operating out of Florida could possess this missile while having access to a fighter jet that could be deployed in an effort to literally shoot down Air Force One and assassinate President Trump.

Naturally, Air Force One has radar jamming capabilities of some kind, but many such countermeasures only have a limited record of success.

And if this one missile just happened to be discovered, how many more missiles have been transported into the United States without being seen?

It looks to me like someone is arming up for a war against America, to be waged from inside America. November 4th, anyone? With the unwatchable DNC convention causing nationwide nausea among likely voters, the Democrats may be desperate enough to try kinetic weapons if they can’t rig enough cheat-by-mail ballots.

In any case, the spectrum of possible conflict in the USA just got upgraded from “rifles” to “missiles.” What’s next, suitcase nukes?