(Natural News) Far-left billionaire George Soros has announced he is pumping another staggering amount of cash into the radical Black Lives Matter organization.

With America burning under the leftist push for socialism, Hungarian-born financier Soros announced he is donating another $220 million to the “Black Lives Matter movement.”

Much of Soros’ money is going into efforts to defund the police and control 2020 voting systems, his foundation revealed.

“This is the time for urgent and bold action to address racial injustice in America,” Alex Soros, George Soros’ son and deputy chair of the Soros family’s “Open Society Foundations,” said in a statement.

“These investments will empower proven leaders in the black community to reimagine policing, end mass incarceration, and eliminate the barriers to opportunity that have been the source of inequity for too long,” Alex Soros said. 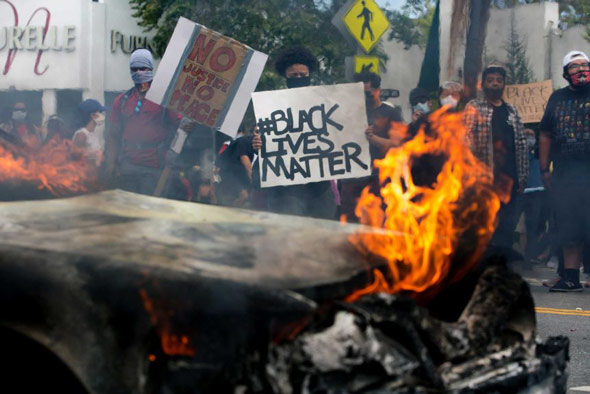 Soros’ group is blaming America’s founding for racial injustice and vows to stop it.

“We recognize that the struggle to dismantle systemic racism is an ongoing one; it has existed from the dawn of the republic to the present day and is embedded in every level of government and in our penal and justice systems,” said Open Society Foundations President Patrick Gaspard.

“But the power surge of people who have taken to the streets to demand that this nation do better—people of all ages, from all backgrounds and in every corner of this country—gives hope to us all,” said Gaspard.

“We are honored to be able to carry on the vital work of fighting for rights, dignity, and equity for oppressed people the world over started by our founder and chair, George Soros,” Gaspard added.

While $150 million of the funds are part of a five-year plan, Open Society Foundations says a $70 million will be immediately spent on plans for “ongoing efforts to fight voter suppression and disinformation and ensure safe and secure elections in the midst of the pandemic.”

Black Lives Matter has been widely slammed for its shady funding and hidden agenda to push Marxism.

Legendary black rapper Lord Jamar recently blasted BLM, saying he doesn’t support the group because it “isn’t our movement… it was given to us by… George Soros.”

The 51-year-old music star, who started hip-hip group Brand Nubian in 1989, was asked during a recent interview with Turning Point USA whether he supports the BLM protests, to which he responded: “No. Absolutely not.”

When asked to elaborate on why he doesn’t support the group, Lord Jamar said:

“Because this isn’t our movement.

“It’s a movement that was given to us by, you know, George Soros and his f**king boys.

“Because they saw how things were going and they didn’t want it to go back to the 60s – to where we start having our own, organic movement.”