(Natural News) The war against genders is still on. More than ever. After Céline Dion’s “gender-neutral” clothing line for children (which contained horrifying symbolism), Mattel has released dolls that assume no identifiable gender.

The gender-neutral dolls of the new Creatable World toy line let kids accessorize the toy to be a boy, a girl, both or neither. The six dolls have different skin colors, hairstyles, and clothing to “celebrate the positive impact of inclusivity.” Each customizable doll comes with long and short hair wigs, skirts, pants, shirts, jackets, hats, and various shoes. To achieve “gender-neutrality”, Mattel toned down feminine and masculine features, such as Barbie’s breasts and Ken’s broad shoulders. The line is said to be geared towards kids who identify as gender-fluid, meaning they don’t identify as having a fixed gender like male or female.

According to Mattel’s website, the line is “designed to keep labels out and invite everyone in, giving kids the freedom to create their own customizable characters again and again”. 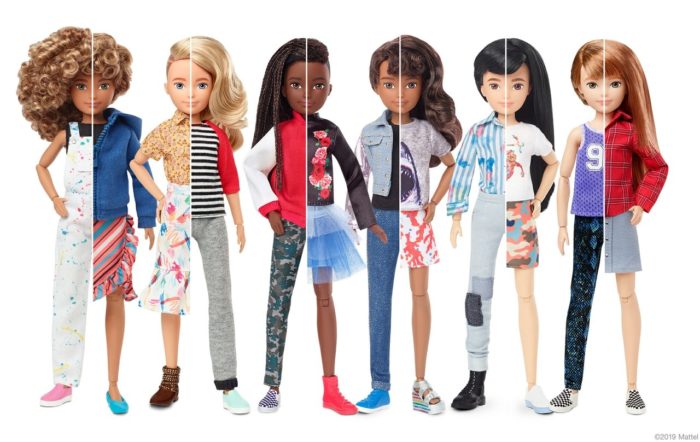 During development, Mattel tested the doll with 250 families in seven states, which included 15 children who considered themselves trans, gender-fluid or avoided defining themselves altogether.

As it is the norm nowadays, the promotion surrounding the line was coated in a thick layer of social indoctrination and “facts” that border on utter absurdity. Kim Culmone, senior vice president of Mattel Fashion Doll Design said in a statement:

“Toys are a reflection of culture and as the world continues to celebrate the positive impact of inclusivity, we felt it was time to create a doll line free of labels. Through research, we heard that kids don’t want their toys dictated by gender norms.”

I’m sorry but that’s a lie. Children do not complain about their toys “being dictated by gen

The video begins with this mind-blowing statement:

While claiming to “allow children to play freely”, they actually want to redefine how children should play. Jess Weiner, who is apparently a “cultural expert” adds:

Is she saying that boys did not grow up playing with dolls cannot be good nurturing fathers?

Later, the head of research at Mattel sums up the situation in a rather Orwellian matter:

“This is the wave of the future. This is where society is heading. The parents want to be onboard on it, they just don’t have the tools or the knowledge to kind of guide their child”.

They want parents to “guide their child” towards that gender-blurring madness.

Of course, the video featured actual “gender-fluid” children who were most likely dressed by adults who want to push their agenda.

Previous :This is why Americans are arming up for bear: Over 100 million people have been brutally slaughtered by the political philosophy being pushed on America by Democrats in 2019
Next : Nine nations are rehearsing their intentions to attack the United States
Receive Our Free Email Newsletter

The LGBT agenda has always been about population control, leaked 1969 memo reveals
ESG is a globalist ‘scam’ meant to usher in ‘One World Government’: James Lindsay
CONFLICTED MUCH? – World Economic Forum ‘anti-corruption’ champion is Pfizer director AND Reuters CEO.
USA Today, a “fact-checking” authority, got caught fabricating its sources across 23 articles
“Go woke, go broke” is a real thing: Trump’s former diversity leader says corporations made “huge miscalculation” backing BLM
Exposed: Canada used covid plandemic to align itself with World Economic Forum agenda
The first casualty of war is the truth – the current western propaganda for Ukraine is epic in scale
Dr. David Martin exposes the ‘the great reset and COVID-19 vaccines’ agenda
They are hypocrites that preach ‘tolerance’ for everyone – except for the groups that they really, really hate
The specter of one world government looms large