Remember the dog sled picture the media claimed was proof of melting glaciers? It was another climate hysteria HOAX

(Natural News) One by one, various climate hoaxes continue to be exposed as the fake news they’ve always been, including the below photo of what appears to be sled dogs running across a patch of melted glacier in Greenland.

The above photo, which has been heavily circulating recently as “evidence” that global warming is melting the polar ice caps, is a certifiable fraud. It was taken in 1984, and it depicts the same area of melted sea water that occurs in this particular region of Greenland every single summer.

There’s nothing at all unusual about this area of Greenland turning from ice to water annually whenever the temperatures naturally warm as a result of seasonal changes. But to climate lunatics everywhere, it somehow “proves” that man-made global warming is real, requiring more climate taxes and laws restricting how much meat people are allowed to eat. 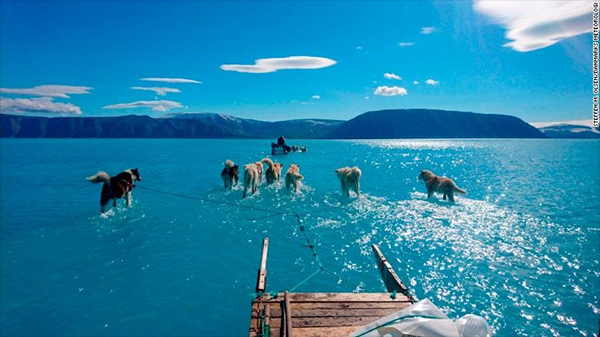 According to the official doctrines of climate change, the changing of the seasons is now considered to be “scientific evidence” that people are driving too many SUVs and unnecessarily allowing their cows to fart – and the world is going to end in 12 years as a result.

It’s complete insanity, and the type of thing that, even just 10 years ago, would have originated on a satire site. But in 2019, climate confusion and global warming derangement have become the norm among gullible leftists who would seem to believe everything they’re told by the mainstream media.

“The mainstream media used to be a source of news, but it has increasingly become a tool of manipulation,” writes Onar Åm for Liberty Nation.

“Using images rather than facts, they push agendas rather than news,” he adds. “It can be found in all areas, but plays an even more significant role in climate alarmism, because science is hard to communicate.”

For more related news about the climate change hoax, be sure to check out ClimateScienceNews.com.

From polar bears to sled dogs to the global warming “hockey stick:” a legacy of climate fraud

As we recently reported, the so-called “hockey stick” graphs that were similarly put forth as “evidence” of climate change have also been proven false.

Just like these sled dogs, and just like the polar bear hoax, the global warming hockey stick was basically made up out of thin air to push the climate agenda, with absolutely no regard for truth or honesty.

Almost nothing that the climate lobby claims is real actually is, in other words. It’s all a big hoax that preys on society’s most gullible, capitalizing on people’s fears and hysteria over the world ending to push an agenda of absolute government control over every aspect of people’s lives.

“Periodically, the media shows pictures of large icebergs breaking off from the Antarctic continent,” Åm writes, pointing out yet another climate hoax that’s been circulating airwaves and newspaper headlines for decades.

“It is a natural event that has occurred for as long as there has been ice in Antarctica, but the media uses the image of calving icebergs to visually persuade you that driving cars and eating meat is immoral.”

A good rule of thumb when it comes to climate alarmism is this: If the media is hyping up something as bad and blaming mere human existence as its cause, run far away because it’s almost certainly fake news aimed at stealing your freedoms and liberties and imposing tyranny on you in the name of “saving the planet.”

“In general, people who believe in nothing will believe anything,” wrote on Liberty Nation commenter in response to this news. “So it is with the ‘global warming as man’s fault’ cultists.”

Previous :Greta the hysterical climate teen has filed a formal complaint with the U.N. over climate change – who’s scripting all this?
Next : NO CRITICISM of “Greta” allowed, as she’s a human shield who is being psychologically terrorized by the eco-fascist Left
Receive Our Free Email Newsletter