While a woman with a close relative with breast cancer has a higher risk, nearly 85 percent of breast cancer occurs in women who have no family history of it. Therefore, experts advise women in their 20s to start checking their breasts each month for signs of the disease.

While the majority of women will be able to feel an unusual lump or bump, there are 11 other breast cancer signs that we should all be aware of.

Recently, an image of a tray of 12 lemons demonstrating different symptoms of breast cancer went viral on Facebook.

Erin Smith Chieze from San Diego was frustrated when Facebook started a campaign asking people to post pink hearts on their walls to raise awareness. Her frustration prompted her to share an image from the charity Worldwide Breast Cancer instead. The picture features lemons with signs every woman should be aware of. While Erin knew about self-exams, a similar picture had led to the diagnosis of her own condition and saved her life.

“In December of 2015 when I saw an indentation that looked like one of those pictures, I instantly knew I had breast cancer. I tried to feel for a tumor, but my tumor was non palpable,” Erin said. “A heart did nothing for awareness. I knew what breast cancer was. I knew all about self exams, but a picture of what to look for keyed me into knowing I had a terminal disease,” she added.

Next time you examine your breast, make sure to keep these 12 signs in mind. 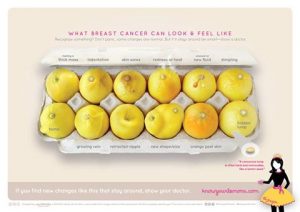 A thickening of breast tissue can be the first sign of a serious underlying condition such as lobular or inflammatory breast cancer.

Breast cancer can be tethered to the breast tissue pulling inwards; this can result in a dip or dent in the breast.

When cancer is growing under the skin, it can surface on rare occasions and cause a wound on the breast.

Redness in one-third of the breast, or a breast that feels warm to the touch, can be a sign of inflammatory breast cancer.

Unusual discharge from the nipple – which can be streaked with blood, brown or clear – can be a sign of breast irritation, which can lead to breast cancer.

Dimpled skin of the breast is another common sign of inflammatory breast cancer.

If you feel a localized swelling, bulge or bump, don’t hesitate to contact your doctor for further investigation.

Sometimes the growing breast tumor can block a blood vessel in the breast, which may result in a dilated vein.

When the tumor is right behind the nipple, it can pull the breast issue in, resulting in an inverted nipple.

While it is normal for your breast to change in size while menstruating, any change in breast size or shape not associated with the menstrual cycle should be investigated.

Fluid buildups in the breast can result in skin that has ridges or appears pitted, like the peel of an orange.

Most cancerous breast lumps or bumps feel hard and immovable like a lemon seed.

Previous :Spider silk advancement may treat wounds with controlled release of antibiotics
Next : 10 Reasons why vitamin D is essential for your health
Receive Our Free Email Newsletter

Compound in honey bee venom found to destroy cancer cells within 60 minutes
Sleep is healing: Getting fewer than 6 hours of sleep if you have chronic illness increases risk of cancer, early death
Continued pesticide use ENDANGERS farm workers and children – why are these risks still IGNORED?
Don’t want additives and chemicals in your snacks? Avoid these 11 BANNED ingredients in foods that Americans are STILL eating
Researchers document anti-cancer potential of plants used in traditional African medicine
Exploring the anti-cancer potential of medicinal plants in Ethiopia
Researchers explain how an unhealthy and inflamed gut can make breast cancer spread more quickly
Age and breast cancer: Limit alcohol consumption and exercise regularly to lower cancer risk, say scientists
NECRO-Medicine: Animal study suggests an injection of DEAD CELLS might help prevent cancer
Behold the Cytophone: Researchers unveil a new kind of laser that can find and ZAP cancer cells