(Natural News) In the first quarter of this year, central banks around the world purchased 87.7 tons of gold. That rose to 186 tons for the second quarter, and in the third quarter a whopping 399.3 tons were purchased. A shocking 300 tons of gold was purchased by China alone, reports ZeroHedge, confirming what we long suspected (even though China’s purchase was deliberately shrouded in secrecy).

That means China is buying up the world’s available gold supply at a pace that dwarfs all the other countries on the planet. Why is China doing this? “China thought to be stockpiling gold to cut greenback dependence,” reports Nikkei Asia, which goes on to say this gold was likely purchased from Russia:

China has made similar moves in the past. After staying mum since 2009, Beijing stunned the market in 2015, disclosing it had boosted gold holdings by about 600 tonnes. It has not reported any activity since September 2019.

The People’s Bank of China likely bought a portion of the Central Bank of the Russian Federation’s gold holdings of over 2,000 tonnes, Toshima said.

In essence, Russia is selling gold to China so that both nations can ditch the dollar. And 100+ other nations are likely to go along with them, resulting in the collapse of global dollar hegemony.

While the United States of America is printing trillions of dollars in “mad money” and trying to wage war with Russia through its proxy state of Ukraine, China is stockpiling gold at truly astonishing levels. BRICS nations, meanwhile, are preparing to launch their new global reserve currency that would challenge dollar dominance and end global reliance on the SWIFT system (which has been weaponized by the West against Russia). Once this happens, the tide goes out and all the nations that have been swimming naked — i.e. not having enough gold reserves to back their currency creation — end up getting tossed to the trash heap of history.

That’s what’s coming for the dollar, naturally. Backed by nothing and printed to oblivion, the dollar’s era of global hegemony is rapidly coming to an end. The Biden regime isn’t even bothering to pretend they might be interested in halting runaway money printing. Instead, they’re cranking up the currency printing machines to unprecedented levels, then looting the nation with Ukraine funding shell games and money laundering schemes that make Mexican drug cartels look like they’re playing Tiddly Winks.

Here’s the current debt burden for the United States of America, via USdebtclock.org: 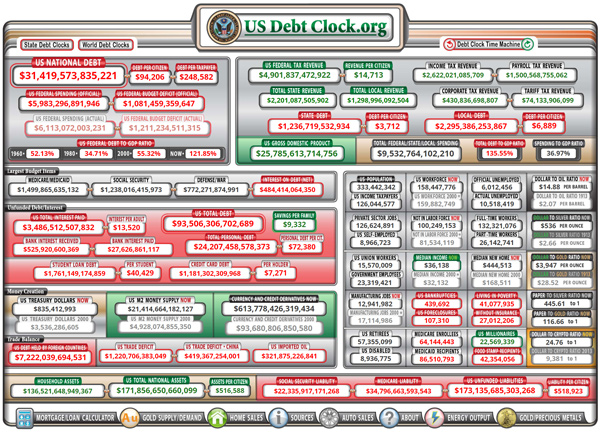 Precious metals industry expert Andy Schectman warned that the silver market is being drained of its physical silver inventories, with around 285 million ounces (Moz) of silver disappearing in recent months.

Wealthy individuals, too, are taking delivery of physical gold and silver, knowing that this is the asset class that outlasts the rise and fall of nations. Remember this when governments (and central banks) tell you gold is worthless while they buy hundreds of tons of it, often while attempting to hide their acquisitions in secrecy.

The typical American investor falsely believes they have achieved “diversity” by holding a basket of stocks and bonds, yet all those investments are in the same asset class (equities), and they all depend on the dollar’s continued dominance. When the dollar craters, all equities that depend on the dollar will suffer a similar fate. True diversity means moving outside dollar-denominated assets and seeking preservation of wealth in instruments that have no counter-party risk.

All fiat currencies have counter-party risk. They can collapse without warning as the world loses faith in the corruption of the government backing them. If the central banks really believed in the staying power of fiat currencies, they wouldn’t be buying gold at all. They could just back currencies by other currencies. Yet the fact that they are buying up so much physical gold and silver reveals their true knowledge and intent. When national currencies collapse, countries like China plan to use gold to achieve public trust in their replacement currencies which will obviously be backed by gold, silver and other physical commodities.

The world, it seems, is fed up with trusting a fiat currency backed by nothing but exploited by a rampaging empire that uses currency and debt to bludgeon the world’s nations into acquiescence. The days of the dollar being weaponized against the world are fast coming to an end, and those left holding dollars rather than gold (or silver) will find themselves empty-handed.

Get the full analysis in today’s Situation Update podcast here:

Discover more interviews and podcasts each day at:

Download my current audio books — including Ghost World, Survival Nutrition, The Global Reset Survival Guide and The Contagious Mind — at:

Download my new audio book, “Resilient Prepping” at ResilientPrepping.com – it teaches you how to survive the total collapse of civilization and the loss of both the power grid and combustion engines.