(Natural News) It appears as though the left-wing New York Times is reluctantly admitting that Americans living in “red” (meaning Republican) counties around the country have developed longer-lasting immunity from COVID-19 than Democrat (“blue”) counterparts.

In a recent edition of the Times’ ‘The Morning‘ flagship e-mail newsletter, columnist David Leonhardt notes:

There is one big new development. When I last wrote about red Covid, in November, I told you that the month-to-month partisan mortality gap might be peaking, for two main reasons.

One, the availability of highly effective post-infection treatments, like Pfizer’s Paxlovid, has been expanding; if they reduce deaths, the drop may be steepest where the toll is highest. Two, red America has probably built up more natural immunity to Covid — from prior infections — than blue America, given that many Democrats have tried harder to avoid getting the virus.

Sure enough, the partisan gap in Covid deaths is no longer growing as fast it had been, as you can see from the new closeness among these lines: 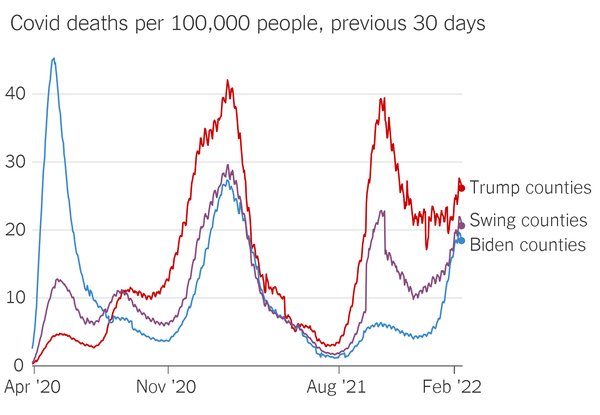 However, later in the article he writes:

But don’t make the mistake of confusing a gap that’s no longer growing as rapidly as it was with a gap that is shrinking. The gap between red and blue America — in terms of cumulative Covid deaths — is still growing. The red line in that second chart is higher than the blue line, which is a sign that more Republicans than Democrats or independents have needlessly died of Covid in recent weeks.

That said, all of his claims do not take into account that there is a double-digit partisan age gap between the ages of 19 and 34, attributing the differences instead to social distancing and vaccine measures alone (cherry-picking data, in other words).

He also concludes his piece with a line that sounds a lot like a product endorsement rather than actual journalism: “The vaccines offer incredible protection from a deadly virus, yet many Americans have chosen to leave themselves exposed.”

It should be noted that one of the primary COVID vaccine makers, Pfizer, spend millions of dollars on advertising last year to include, not so ironically, full-page ads in the Times — ads that often fetch as much as $250,000 per day depending on the day of the week and placement.

And of course, the Times has not disclosed any of its financial interests in having Pfizer as an ad customer even as one of the paper’s ‘journalists’ writes copy promoting vaccines.

Also, there is zero chance that the Times would bother to report on Pfizer’s deadly clinical trials because that would cost ad revenue.

“Nobody can truthfully claim that Pfizer’s Wuhan coronavirus (COVID-19) vaccine has been proven by a clinical trial to save lives. Still, people are being pressured to receive the vaccine under threat of court-martial, loss of employment, denial of medical treatment and exclusion from normal life,” Natural News reported in December.

The report notes that the Food and Drug Administration (which has since been outed as cooperating with drug companies that pay the agency millions per year (according to an accidental whistleblower) released a report Nov. 8 that updated the clinical trial results of Pfizer’s mRNA-based vaccine, to include around 44,000 people over 16 years of age who were equally divided into two groups — one that received the vax and the other which received a placebo.

And all-cause mortality, which is the combination of deaths from any cause in both control groups, is the most reliable measure of a clinical treatment whose aim is to reduce mortality.

Face it: Our entire society has been hijacked by power-hungry control freaks who lie to us daily.

NY Times forced to admit that COVID-19 immunity is better in red states that opened sooner
Subway franchisees revolt, demand company end woke Rapinoe’s ads: ‘It gets tiring apologizing’
Facebook now tracking OFFLINE interactions with partner stores to stalk users with targeted ads
Budweiser to skip Super Bowl ad this year, will instead promote coronavirus vaccines
Brighteon.com now exploding in popularity, but hurting for cash flow
Ads warning about dangers of 5G BANNED by Great Britain’s advertising “authority”
Volkswagen commercial banned in UK because it shows woman caring for a baby
Regulations to curb junk food ads targeting children are FAILING, says WHO report
If we were really worried about children’s health, we would BAN junk food advertising
Entertained and sedentary: Children have a higher risk of becoming OBESE if they have a TV in their bedroom