(Natural News) We recently covered how the MSM uses pre-written scripts, and as their mouth puppets dribble them out, they all sound exactly the same.  Tucker Carlson had a great segment on just this when he talked about inflation the other night, as seen in the First Video at the bottom of this article.

He mentions this list of dutifulpaid actor’s puppeting their assigned deceitful lines;

JEN PSAKI MAY 25: Our economists have conveyed that they feel that the impact of our proposals will be transitory.

JENNIFER GRANHOLM NOVEMBER 7: All of the economists that the president has been relying on suggest there is a transitory nature to the inflation problem

MAXINE WATTERS NOVEMBER 28: This inflation that we’re experiencing is transitory. It is not going to be here for long.

JANET YELLEN JUNE 14: We’ve had several months of high inflation that most economists including me believe will be transitory.

JEROME POWELL MARCH 24: We don’t expect that that upward pressure will produce substantially higher prices or that the effects will be persistent, we expect that they will be transitory or temporary.

Our favorite source for word definitions seems to be Mirriam-Webster, so let’s use them for this one –

2: tending to pass away : not persistent

Consider what they are really saying; it is NOT that inflation will be reversed; only that it will subside or lesson its rate.   Reversing it would be called Deflation, and is described by Merriam-Webster as;

1: an act or instance of deflating : the state of being deflated

2: a contraction in the volume of available money or credit that results in a general decline in prices

Deflation occurs during recessions as it is considered an adverse economic reaction and causes many detrimental effects on an economy such as higher unemployment, increases in interest rates that cause people to defer spending except for essentials like food and shelter, and it can lead to a downward spiral chain reaction that can kill an economy just as fast as an out of control inflation rate can.  A dead economy equals a dead government historically as the people rise up to put an end to their miseries; or at least they try to.

Take note of the bolded portion of deflation definition # 2, it will be explained later on.  Deflation is widely regarded as an economic problem that can intensify a recession or lead to a deflationary spiral.  Stagflation is a favorite cry about the Jimmy “Peanuts” Carter fiasco, and it may be better understood when compared to Inflation.  “Inflation is a term used by economists to define broad increases in prices. Inflation is the rate at which the price of goods and services in an economy increases. Inflation can also be defined as the rate at which purchasing power declines” whereas “Stagflation is a term used by economists to define an economy that has inflation, a slow or stagnant economic growth rate, and a relatively high unemployment rate. Economic policymakers across the globe try to avoid stagflation at all costs.”

So perhaps inflation may be “transitory” in that it would not continue to increase, although it is more likely that it will inflate ever faster unless the Fed or Congress can keep the massive spending under some form of control.  One of the major “benefits” of inflation is that it hides increases in government spending.  A multi-billion dollar deficit counted over an extended yearly payout with inflation included means that the deficit is comparatively much cheaper in dollars at the end of that period than they were in the beginning creating the illusion that it was not that large of a spending bill to begin with.  It occurs to me that perhaps this is the reasoning behind the absurd lie that the current spending bills are considered “paid for” as they expect inflation to careen out of control to make the tens or hundreds of trillions in debt seem like nothing.  We can expect $500,000 Snickers candy bars at a rate that might reduce the total debt enough to make it seem like it is just a small thing.  That is deceit in the extreme, but it has been used since the beginning of organized financial affairs of nations and out of control it results in Hyperinflation which is the destroyer of so many nations and the INTENDED cause of many wars. 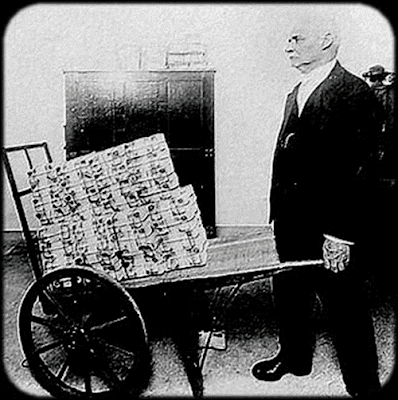 How is the inflation rate determined?  Depends on which inflation rate you want; some sort of overall rate, some sort of average household rate or geographical portion of the nation, rate in any given sector of the economy or any given product or service, the cost of money, observed versus actual (again in what specific definition), or other rate?  The generally accepted one is the changes to the CPI, the Consumer Price Index, which in itself has many versions of numbers with the “normally” quoted one or the standard one being the BLS (Bureau of labor Statistics) CPI-U, which means the Urban version for those numbers.  Those items contained in it are changed often as they conduct some sort of survey that considers what was actually being purchased by those in the surveys, so it may not fit your situation.  For example, a farmer that grows most of his own food including a cow to milk and chickens for the eggs and meat, will not have anywhere near the inflation worries as an urban apartment dweller that can produce almost nothing and is therefore far more under the constraints of his income and availabilities of those products.  City dwellers also need not worry about the price to fuel their tractors except for the increases in food costs that produces.  This also means that comparing the CPI or inflation rate from one year to the next is not a direct comparison, and from decade to decade is a far worse one because they are NOT BASED ON THE SAME ITEMS.  The Joey Brandon inflation numbers show an increasing rate that is considered the worst in 4 decades and it is not even the real rate.

In the United States, the unadjusted Consumer Price Index for All Urban Consumers is based on the prices of a market basket of: food (14 percent of total weight), energy (9.3 percent), commodities less food and energy commodities (19.4 percent) and services less energy services (57.3 percent). The last category is divided by: shelter (32.1 percent), medical care services (5.8 percent) and transportation services (5.5 percent).

Using the SAME items that were in the 2011 index shows a current CPI-U would be over 10% rate of inflation, not the 6.8% that is being quoted – apples to oranges.  I strongly suspect underhanded manipulation in those numbers in addition to the changes that make them unreliable to base the real rate on.  If you haven’t watched the first video yet, perhaps you might want to in order to understand that even the 10% rate is way below what the real life numbers you and I are subjected to.

“Imagine a world in which I was legally allowed to steal 13–30% of your wealth every single year, and lie to you about how much I’m stealing.
Welcome to Planet Earth, 2021”
is how Strange Sounds put it last July and included these numbers from way back when things were not as expensive as they are now.

Pampers and Tampax? Going up 5–9% in September.

For a comparison of what officially is considered the changes in what goes into the CPI for the purpose of calculating the inflation rate, visit the Bureau of Labor Statistics page that covers just that here.

As I said, government spending DIRECTLY affects the price of money and therefore inflation.  Take a look at this graph to see what the Brandon regime is doing to our money supply; 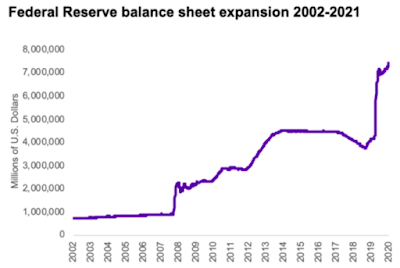 The Kenyan also had a large spike, but look at the one from the babbling dunderhead and its evil NWO regime.  Inflation will follow suit if we last long enough to see it or do not self destroy before we get there.

Submit a correction >>
Previous :Instacart shopper accused of running over elderly couple’s groceries after spotting pro-police sign on their property
Next : ‘It’s worse than a war zone’ : Murder and mayhem being encouraged by media in preparation for the second American civil war to go hot
Receive Our Free Email Newsletter