After the Biden regime gives the media their marching orders, they push a ‘boom’ that doesn’t exist

(Natural News) With the continued increases in prices from everything from gas to food and almost every product in between, along with the shortages of food, labor, and other retail items, with terminations of “non-vaxxed” employees causing even more shortages and price hikes, many families in America will be hard-pressed to keep their families fed as 2022 is expected to see all the aforementioned issues get worse, not better.

The Biden regime, along with the media are on a brainwashing campaign to convince Americans that what they are seeing is an economic “boom,” rather than watching this great beloved nation crumbling before our eyes.

For a second, or a blink of an eye, the media actually and reluctantly acknowledged the economy failing, and then the Biden regime sent out their little soldiers to give the media their talking points, to which the MSM collectively saluted and march off to do Biden’s bidding.

BEFORE THE BIDEN REGIME GAVE MEDIA THEIR MARCHING ORDERS

Before all those Biden staffers’ talks with large liberal media outlets, the headlines were at least showing Americans a glimpse of what was happening, which would give their audience a chance to prepare for the pain coming, as shown below.

CBS, November 23, 2021: As inflation jumps, here’s a look at how much more Americans are paying for food and fuel

Then the Biden regime’s begging for better news coverage: 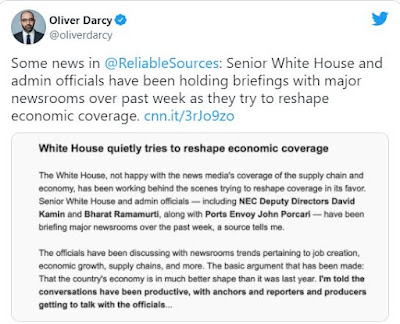 The White House, not happy with the news media’s coverage of the supply chain and economy, has been working behind the scenes trying to reshape coverage in its favor. Senior White House and admin officials — including NEC Deputy Directors David Kamin and Bharat Ramamurti, along with Ports Envoy John Porcari — have been briefing major newsrooms over the past week, a source tells me.

The officials have been discussing with newsrooms trends pertaining to job creation, economic growth, supply chains, and more. The basic argument that has been made: That the country’s economy is in much better shape than it was last year. I’m told the conversations have been productive, with anchors and reporters and producers getting to talk with the officials…

THE BOOM THAT ISN’T…

Right after being given their marching orders, liberal media establishments went straight to work like good little Democrat soldiers, as just a small sample of headlines below shows.

CCDigital: Get ready for a historic boom in the freight industry: Top economist

Washington Monthly: It’s a Biden Boom—and No One Has Noticed Yet

That is just a small sample, although the New York Times took the propaganda to a whole new level, and said Biden sees a boom, but we the people are “more concerned about rising prices,” and COVID, than we are the non-existent “Boomage” they are all trying to sell us.

We just can’t see it, the barbarians that we are.

Minnesota filing suit against COVID testing company allegedly engaged in massive cover-up
FDA criticized for restricting the use of COVID antibody treatments
PCR testing a fraud: Government uses faulty testing to amplify COVID case numbers
Amnesty International urges Italy not to discriminate against the unvaccinated
The results of the most reckless human experimentation in history are flowing in as quickly as the bodies pile up: The jab is a huge success if its true purpose is depopulation
Hollywood superstar Keanu Reeves takes stand for Tibet, faces huge backlash from Chinese netizens
As Joe Biden sends Americans to their deaths to fight for fascists, history shows demonization and internment camps await those who stand against their ‘end times war’
WHO: No evidence healthy children, adolescents need COVID-19 boosters
Local restaurants still struggling with supply chain issues, labor shortages brought about by disastrous pandemic policies
Supreme Court to hear case that could end racial preferences in college admissions