New York bill would allow gov. to detain anyone considered to be public health threat

(Natural News) A proposed bill by the New York state legislature would allow the government to forcibly detain anyone without trial if they’re deemed a public health threat.

The bill, A.416, is among a host of Covid restriction and vaccine mandate bills set to be voted on during the next legislative session starting on January 5th.

According to the bill’s text, A.416 would “allow the governor or the appropriate health official to order the removal and detention of any person afflicted with a communicable disease in the event that there is a state of health emergency declared by the governor in relation to such disease.” 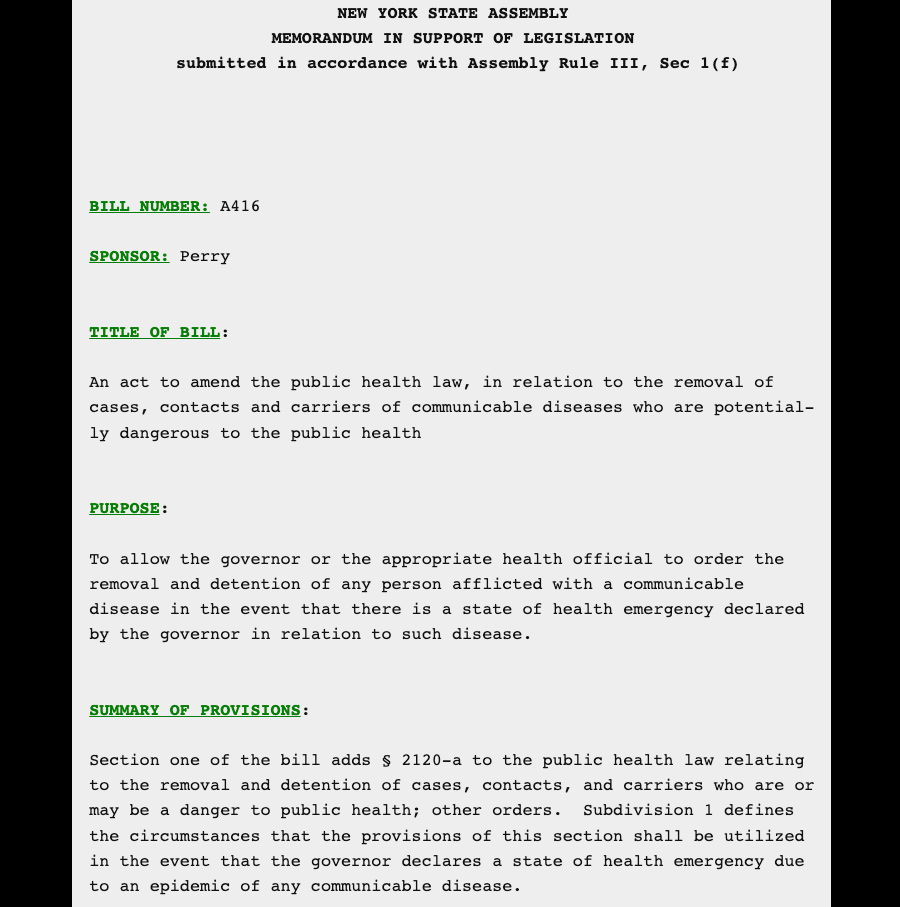 “[A]ny person or group removed or detained by order of the governor or his or her delegate shall be detained for as long as the department may direct,” subdivision 3 of the bill further states.

As if this draconian legislation weren’t enough, New Yorkers have highlighted several more bills up for vote next session that are equally abhorrent in terms of human rights violations.

NY’ers: Pay ATTENTION! This is the plan Democrats have for the entire country. pic.twitter.com/hbgeGeG8x4

• A8378 would require students to receive Covid-19 vaccines prior to attending school.

• A279 would require healthcare providers to report vaccinations of adults aged 19 and over to the department of health or a regional “health information organization,” essentially instituting a statewide vaccine database.

• A2240, or S45, would require flu vaccines for children attending daycare.

• A8398 would eliminate religious exemptions for certain students and limit medical exemptions by local governments.

• A3192, or S3041, would allow children 14 and over to consent to vaccination, regardless of parental consent.

• A822, or S937, would allow children to be administered STD treatments without parental consent.

Looks like New Yorkers are about to enter a new era of Covid tyranny and need to remain vigilant if they want their civil rights to remain intact!

Submit a correction >>
Previous :Unvaxxed in Austria could be imprisoned for a year
Next : VAERS COVID vaccine data show surge in reports of serious injuries, as 5-year-olds start getting shots
Receive Our Free Email Newsletter