(Natural News) The abrupt disappearance of a live feed showing Taiwan’s digital minister occurred because the White House panicked over a map showing Taiwan in a different color than China, Reuters claimed on Monday.

Audrey Tang, formally a “minister without portfolio” in the Taiwanese government, was speaking during President Joe Biden’s “Summit for Democracy,” a series of video addresses from some of the world’s states. Biden included the island nation of Taiwan despite the fact that the American government does not recognize Taiwan’s sovereignty as doing so would immediately sever all diplomatic ties with communist China.

Taiwan is a free, democratic sovereign nation. The Chinese Communist Party falsely claims that Taiwan is a rogue “province” of China and that its president, Tsai Ing-wen, and her administration are dangerous separatists with no legitimacy, despite being freely elected by their own people, unlike anyone in the communist Chinese government. Beijing, which has historically never ruled Taiwan, automatically cuts all diplomatic ties to any country that recognizes Taiwan’s sovereignty. Xi Jinping has threatened that anyone who acknowledges that Taiwan is a country will have their “bones ground to powder.”

Tang attended the virtual summit to discuss how Taiwan uses the internet and emerging technologies to improve its diplomatic governance. In doing so, Tang showed a map of Asia created by the South African human rights organization Civicus showing Taiwan as the freest country on the continent. Civicus uses various shades of green, yellow, and red to rate freedom around the world, using bright green to mean freest and bright red to mean most repressive. Taiwan received the NGOs only bright green rating in Asia; China appeared in bright red.

Tang’s feed momentarily cut off when the map appeared on screen and returned in audio-only form. The White House aired a disclaimer reading, “any opinions expressed by individuals on this panel are those of the individual, and do not necessarily reflect the views of the United States government” as Tang described Taiwan correctly as a “country.”

Ironically, Tang’s statement was part of a panel discussion on “countering digital authoritarianism.”

Much of Tang’s statement urges the maintenance of a fully open internet and emphasizes access to the internet to foster democratic participation. Tang calls broadband access “a human right” and explains how Taiwan has used popularly sourced contract tracing systems – rather than a centralized government database of private medical information – to contain the Chinese coronavirus, which Taiwan was the first nation to warn the World Health Organization (W.H.O.) about outside of China (the agency “mostly ignored” Taiwan as, at China’s behest, it does not recognize Taiwan as a country or allow it to participate in global health initiatives).

“We believe that a completely open environment with free speech uncensored is perfect for letting democracy flourish,” Tang said.

“They choked,” an unnamed source said of the White House to Reuters.

“This was completely an internal overreaction,” a second anonymous source confirmed.

According to the Reuters report, White House officials feared the different colors on the map were meant to highlight the fact that Taiwan is a different country from China – despite the fact that China, Laos, and Vietnam are all the same color.

“One source said the map generated an instant email flurry among U.S. officials and the White House National Security Council angrily contacted the State Department, concerned it appeared to show Taiwan as a distinct country,” Reuters reported. “Washington complained to Taiwan’s government, which in turn was angry that Tang’s video had been cut.”

Among the concerns from Biden officials was the fact that the map apparently “had not appeared in ‘dry-run’ versions of the presentation before the summit.” One of the anonymous sources speaking to Reuters noted, however, that the map was not a political one – meaning it was not showing the borders of sovereign states – and that little dispute exists that Taiwan is a significantly freer society than China, the point the map was made to show.

The National Security Council (NSC) denied the claim that the White House cut the feed intentionally in a statement to Reuters. Tang told Reuters of the incident, “No, I do not believe this has anything to do with the Civicus map in my slides, or US allies in Asia for that matter.”

The Chinese Communist Party repeatedly complained that Biden had not invited it, arguably the world’s most repressive regime, to the “Summit for Democracy.” On Taiwan’s invitation, however, Chinese state media outlets appeared unimpressed, calling the invite a “wimpy” move to anger Beijing.

The bizarre video feed incident adds to a rapidly growing catalog of confusing Biden administration messages on Taiwan. Biden himself has repeatedly asserted that the United States has a “sacred” commitment to go to war with China if it invades Taiwan, at one point this year comparing that alleged duty to the obligations established by the North Atlantic Treaty, which created NATO. In reality, America has not treaty bound itself to defend Taiwan with military action, as it does not even recognize its basic existence as a country.

The White House has eagerly urged the world to disregard Biden’s comments.

“The U.S. defence relationship with Taiwan is guided by the Taiwan Relations Act. We will uphold our commitment under the act, we will continue to support Taiwan’s self-defence, and we will continue to oppose any unilateral changes to the status quo,” a White House spokesperson said in October. 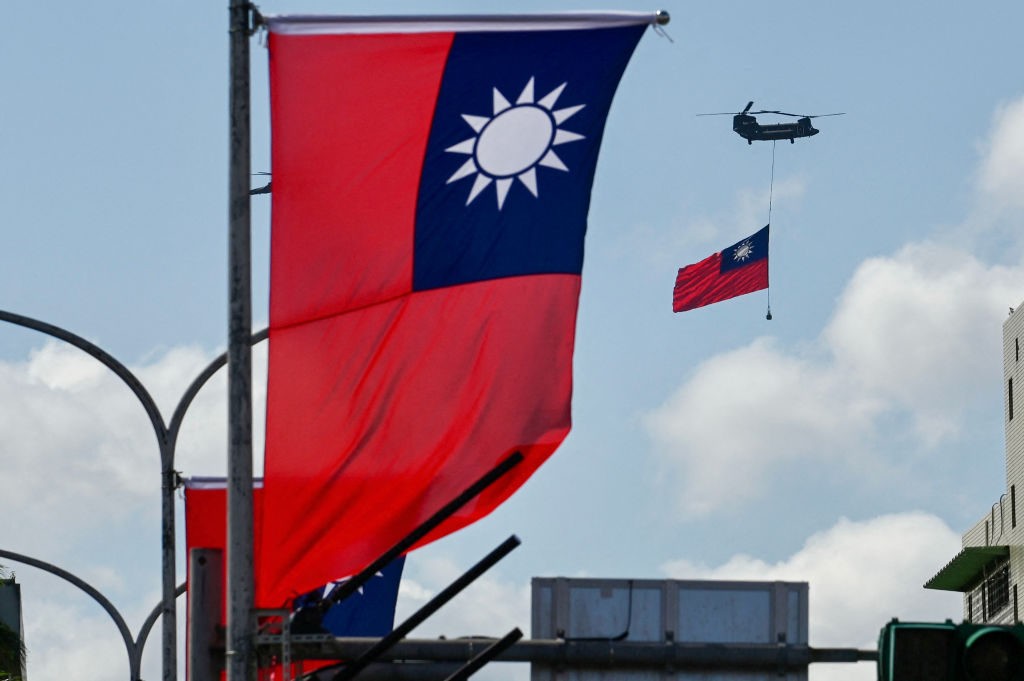 Beijing has crafted an image of not taking Biden seriously. Notoriously misogynistic Chinese government propagandist Chen Weihua said in October, the last time Biden claimed America had a commitment to militarily defend Taiwan, that the president was “just too old to think clearly.” The state-run Global Times newspaper asserted, “Biden does not have the political authority to announce that the U.S. military will ‘defend Taiwan’ when a war breaks out, nor does he have the confidence to have a strategic collision with [China] in the Taiwan Straits.”

During a video conversation with Biden, Xi threatened the United States just in case Biden did consider acting on Taiwan.

“Such moves are extremely dangerous, just like playing with fire,” Xi said, according to Chinese government media. “Whoever plays with fire will get burnt.”

Xi’s threat was notably absent from White House summaries of the conversation.

Submit a correction >>
Previous :Schumer, who accused Trump of Russian collusion, is getting paid by Putin
Next : Fully vaccinated mom gives birth to baby bleeding from mouth and nose dies day after, says VAERS report
Receive Our Free Email Newsletter