US pilot deaths increase by 1,750% after covid vaccine rollout

(Natural News) Previously healthy U.S. airline pilots are passing away at an unprecedented rate. Pilots are required to be in tip-top physical condition, but in 2021, the entire airline industry conspired against the pilot’s individual health and threatened them with termination if they did not partake in the covid-19 vaccine experiment. As a result, over one hundred young pilots have mysteriously passed away in 2021, as countless other pilots suffer silently from adverse events and depleted immune systems.

A total of one hundred eleven pilots died in the first eight months of this year! This is a 1,750% increase from 2020, when the world was supposed to be in the middle of a pandemic. A list of the deceased individuals was published in the Air Line Pilot Association magazine. In comparison, there were 6 airline pilot deaths in 2020, and only one death in 2019.

Surge in pilot deaths is a warning sign to all

Most of the 111 deaths occurred after the covid-19 jabs were rolled out en masse. Because there are no medical codes for vaccine-induced death, most of the deaths are blamed on other causes. These causes may be related to the pathological evidence behind vaccine injuries, but are never coded as such. Pathological evidence is often ignored, and the deaths of young men and women are often referred to as “sudden” or “unexplained” – with no pathological investigation.

Only 5 deaths were recorded from January-March in 2021, when vaccine uptake was low. Peculiarly, a total of (39) deaths occurred in July and (34) occurred in August — right after governments and private companies used vaccine mandates to violate the privacy of their employees and punish them. Even though these intimidation tactics are illegal, these vaccine mandates were used to scare pilots into submission. Like in many professional fields, pilots went against their own beliefs and against their private medical situation, accepting the subjugation. Many complied with the vaccine mandates because the discrimination was so strong, equal opportunities were being shuttered and personal health decisions were not being honored. Many were afraid to lose their job and their future career prospects, so they lined up, hoping for the best while justifying the medical tyranny. 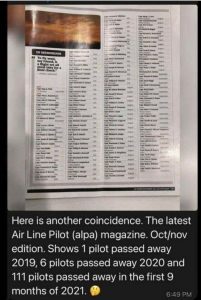 Deadly vaccine issues have been pushed aside for decades, as the world wakes up to the industry’s hidden horrors

Young, previously healthy athletes are seeing the same trend in mortality as the pilots are. Goodsciencing.com tracked over 300 post-vaccine medical incidents from January 1 to December 10. These incidents involved young, previously healthy athletes who suddenly collapsed on the playing field in 2021. Out of these unexplained medical incidents, 170 of the athletes ended up dead. These trends are not surprising, because pharmacovigilance data collected around the world shows that the mRNA vaccines are causing heart inflammation, autoimmune issues, and immune depletion, leading to sudden cardiac arrest, neurological dysfunction and severe infections. CovidVaccineVictims.com retains a memorial for people who passed away as a result of this horrendously forceful, ghastly genetic experiment.

The issues with vaccination have been brushed aside for decades, ever since the 1986 Childhood Vaccine Injury Act granted legal protections for vaccine companies in the United States. Enjoying legal immunity for over thirty years, vaccine makers made a mockery of the rule of law, exempting themselves from legal accountability when their products harm people. Today, mRNA vaccine makers have entered into contracts with governments around the world to exempt their operations from any judicial responsibility or a jury trial. Vaccine makers are operating above the law and will continue to get away with genocide if the rule of law is not restored. The mRNA vaccine makers have plans for endless boosters now. Their dominion over governments and their endless money supply will allow them to steal, kill and destroy using propaganda, coercion and force.