(Natural News) A new analysis reveals the extraordinary left-wing bias of website ratings firm NewsGuard, which should concern every American given that it is expanding its reach into cable and broadcast TV news. Liberal outlets were rated 27 points higher on average than news organizations on the right.

MRC Free Speech America analyzed the NewsGuard ratings of media outlets based on a list compiled by AllSides classified by their “bias” on a left-to-right scale. The average NewsGuard score for the “left” and “lean left” outlets — which included leftist outlets like Jacobin and The Nation — was 93/100. While the average rating for “right” and “lean right” outlets — which included Fox News, Washington Times and New York Post — was a low 66/100. That’s a 27 point disparity.

There were 31 total outlets listed as “left” or “lean left” and  24 outlets listed as “right” or “lean right” by AllSides. AllSides included the opinion sections of news websites separately. MRC Free Speech America excluded any outlet that was characterized as “opinion” to keep the focus on news organizations for the analysis.

The trend is very disturbing, given that NewsGuard is reportedly expanding its partnership with IPG Mediabrands to co-create “the first-ever tool to evaluate and rate individual broadcast and cable news programs and networks,” according to a press release. “The new rankings will encompass 117 shows on 27 networks and will launch in spring 2022.” 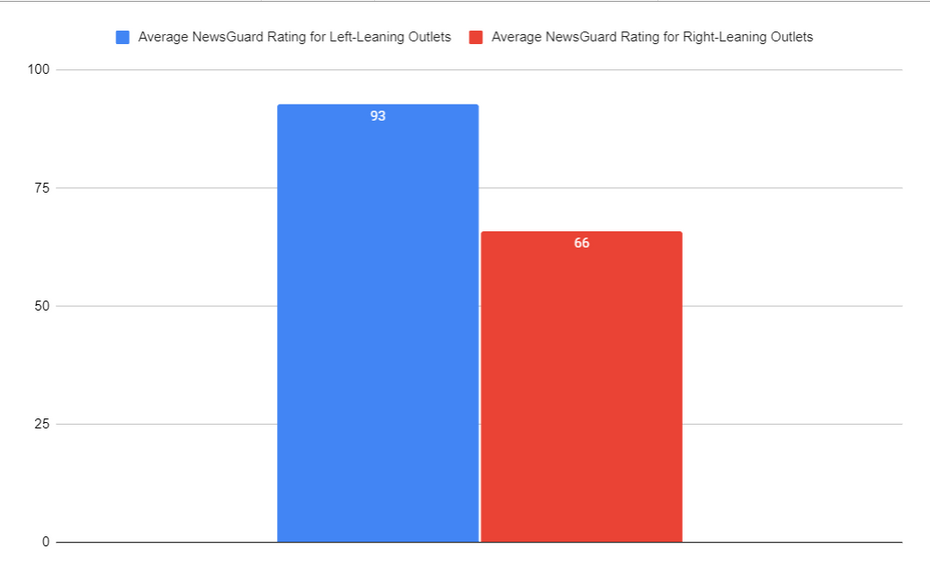 Even the liberal Poynter Institute cited two media experts who shared “praise for the stated methods for rating bias” by AllSides. Poynter is the same institution that attempted to blacklist 29 conservative outlets in 2019 and is funded by prominent liberal billionaires, including George Soros and Pierre Omidyar. However, AllSides including Deseret News in its “lean right” list is disputed by MRC research.

The breakdown of the lists of outlets is even more revealing in terms of their individual grades. Socialist site Jacobin, scored an astonishing “92.5” by NewsGuard. The same outlet published Marxist propaganda in October headlined: “Socialism Isn’t Just About State Ownership — It’s About Redistributing Power.” In April 2020, Jacobin published a piece celebrating how “[s]ocialism is back on the agenda in the United States, thank God. And today’s newly minted socialists shouldn’t be afraid to embrace Marxism.”

By comparison, The Federalist, posted in the “right” AllSides list, was scored the worst with a ridiculous “12.5” on NewsGuard. A predominant reason for the abysmal rating, according to NewsGuard, was that The Federalist questioned the efficacy of mask mandates for COVID-19, even though liberal CNBC (not on the AllSides list, but has a “95” NewsGuard rating) cited a study showing that cloth masks were only 37 percent effective at filtering out virus particles. Another August preprint study did not find an “association between mask mandates or use and reduced COVID-19 spread in US states.”

That’s not all. The Nation, which also scored a high “92.5,” is the same outlet that published a 2020 piece defending “property destruction” as integral to the success of a left-wing “uprising” following the murder of George Floyd. The piece advocated for property violence: “Given that capitalism largely restricts pleasure to the consumption of goods, we should be able to entertain the idea that this taking of unnecessary things—while not a recognizably political act—is understandable or even a [sic] justifiable.” [Emphasis added.]

Leftist outlet Mother Jones even managed to secure a notable “87.5” rating by NewsGuard. In a report headlined, “The media’s epic fail,” Axios slapped down the liberal media for pushing the discredited 2017 Steele dossier used to tie former President Donald Trump to Russia. Axios called the occurrence “one of the most egregious journalistic errors in modern history, and the media’s response to its own mistakes has so far been tepid.” Mother Jones, one of the outlets that the FBI reportedly used to corroborate the dossier, was stiff-necked and deflected responsibility away for pushing the Steele falsehoods. According to Axios:

Mother Jones Washington bureau chief David Corn began reporting about the dossier prior to the 2016 election. Asked by [Washington Post media critic Erik] Wemple whether he planned to correct the record, Corn said, ‘My priority has been to deal with the much larger topic of Russia’s undisputed attack and Trump’s undisputed collaboration with Moscow’s cover-up.’ Corn did not respond to a request to speak on the record with Axios.

One of Corn’s reports promoting Christopher Steele in 2017 remains on the Mother Jones website with no editor’s note correcting the record. Still, NewsGuard rewarded Mother Jones with a strong grade of “87.5.” This is damning, given that one of NewsGuard’s five criteria for “credibility” includes: “Regularly corrects or clarifies errors.” [Emphasis added.]

In addition, “[t]he site makes clear how to report an error or complaint, has effective practices for publishing clarifications and corrections, and notes corrections in a transparent way.” Mother Jones was given a green checkmark for this criteria in its rating.

Here’s a real doozy: BuzzFeed News, which “made waves in 2017 by publishing the entire [Steele] dossier, sa[id] it has no plans to take the document down.” According to Axios, “[The dossier] is still online, accompanied by a note that says ‘The allegations are unverified, and the report contains errors,’” even though a key source for the document was charged with “lying” to the FBI. NewsGuard still awarded the outlet a perfect “100” score.

Only two “lean-right” outlets on the AllSides list were given “100” scores by NewsGuard, both of which happen to be the Democrat-favoring Deseret News and the anti-Trump Reason magazine. Another anti-Trump outlet listed in the “lean right” AllSides list was The Dispatch, which received a “92.5” score from NewsGuard. It appears NewsGuard is more willing to award great scores to “lean right” sites that ironically publish pro-liberal content it approves.

METHODOLOGY: MRC Business utilized the AllSides list media list as a reference point to determine how NewsGuard rates outlets considered “left” and “lean left” in comparison to outlets considered “right” and “lean right.” AllSides claimed it has a “patent on rating bias and use[s] multiple methodologies, not a homogenous group or an algorithm. We use Blind Bias Surveys, Editorial Reviews, independent reviews, and third party data to assess bias.” Associated Press, which was listed in both the “center” and “lean left” lists, was not included in the calculations for purposes of this report.

NOTE: Readers should be aware that this report only uses the AllSides list to analyze NewsGuard ratings of outlets considered by AllSides to be left-leaning or right-leaning and does not necessarily reflect MRC’s characterizations of these outlets.