Top 8 most COMMON and SERIOUS adverse reactions to Covid vaccines

(Natural News) Vaccines have long been considered the holy grail of medicine in the United States, because they were sold that way. In a capitalistic country built on advertising and marketing of goods, services and medications, the majority of Americans believe everything they hear on television, read online, and see in magazines and newspapers. They think it’s all real, all legitimate and approved for use or consumption by someone official somewhere. Yet, most products and medicines pushed by the media and the government are adulterated and toxic for the human body, especially vaccines.

What’s worse is that adulterated vaccines cause horrific side effects and adverse events that are often permanent, including death. Now, those detrimental health damages are being covered up, not just after they happen, but during clinical trials.

In fact, newly uncovered Pfizer documents reveal TENS OF THOUSANDS of adverse reactions that were reported way back in January and February of 2021, nearly a year ago. The documents turned up after a plaintiff group of professors/scientists filed for a Freedom of Information Act request. This is often the only way the public ever finds out about these pharma criminals and mass murderers’ plots and ploys to hoodwink the masses with toxic vaccines.

Who can ever trust pharma criminals that are repeat offenders, year in, year out?

How can anyone ever trust anyone who works for Pfizer, Moderna, J&J, Merck or any of the vaccine-making gangsters, who function like repeat offenders who should all be in prison serving hard time? There is a total lack of transparency in the most important realm of medicine where we’re supposed to be beating back a pandemic. This surely won’t “flatten the curve” or snuff the spread of Covid. Doctors and nurses across America are being misinformed with disinformation and improperly educated to pass on false information to their patients that recklessly endangers their lives with gene therapy injections that kill (and maim for life) more people than they save.

Within just a few months of distribution, executives and scientists at Pfizer KNEW about more than 50,000 serious adverse reactions caused by their Covid vaccine that were reported in the first couple months, and they told nobody.

In a smoking gun document, Pfizer confessed to the FDA under the heading “Safety Concerns” that mRNA jabs can cause “Vaccine-Associated Enhanced Disease” (VAED) which can be a respiratory infection/dysfunction also. Imagine that. The Covid virus is a respiratory infection from a virus genetically altered by humans in a laboratory, and the vaccine for that virus infection CAUSES the human respiratory system to suffer an enhanced respiratory disease. Talk about pouring gasoline on a fire.

So the FDA knew this, Pfizer knew this, and STILL they were granted “Emergency Use Approval” to further infect millions Americans without them ever knowing a thing.

The secret document also revealed over 1200 deaths and over 42,000 adverse reports totaling nearly 160,000 adverse reactions from the Pfizer mRNA jab. This puts them on the chopping block liable for millions of dollars in damages to every patient they lied to that got hurt or killed (including every man, woman, child, infant or pregnancy terminated).

General disorders and nervous system disorders top the chart for these known adverse reactions. Plus, three times the women get affected than men, for some unknown reason (population control). Is this vaccine designed for gender-specific damage in order to reduce the population? Pfizer and the FDA certainly knew about it. So here they come –the top 8 most common and SERIOUS adverse reactions to Covid vaccines:

#8. New infections, including Covid and its variants 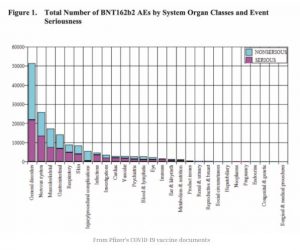