A simple search of the Post’s website for the terms “f—” and “Trump” together gets you a list of articles exposing the prevailing feeling at the newspaper toward the former President. Including: “Former Mexican president says he will not pay for Donald Trump’s ‘f—— wall,'” “She put an obscene anti-Trump message on her truck and was arrested. Now she might sue,'” and “YG’s political message is as blunt as can be.”

Despite this history of promoting anti-Trump vulgarity, Parker and Wolf complained about how Biden was in Scranton, Pennsylvania and was “greeted at the corner of Biden Street by a woman holding a handmade ‘F— Joe Biden’ sign, with an American flag as the vowel in the offending word.”

Adding: “And back in Boise, Rod Johnson, a retired gunsmith, has hung a blue flag from the roof of his home that reads ‘F— Biden.’ Underneath, in smaller letters, he added, ‘And f— you for voting for him!!'”

The message was clear: the Washington Post wanted to be the arbiter of who could use such language against a president and which one was the worthy target. 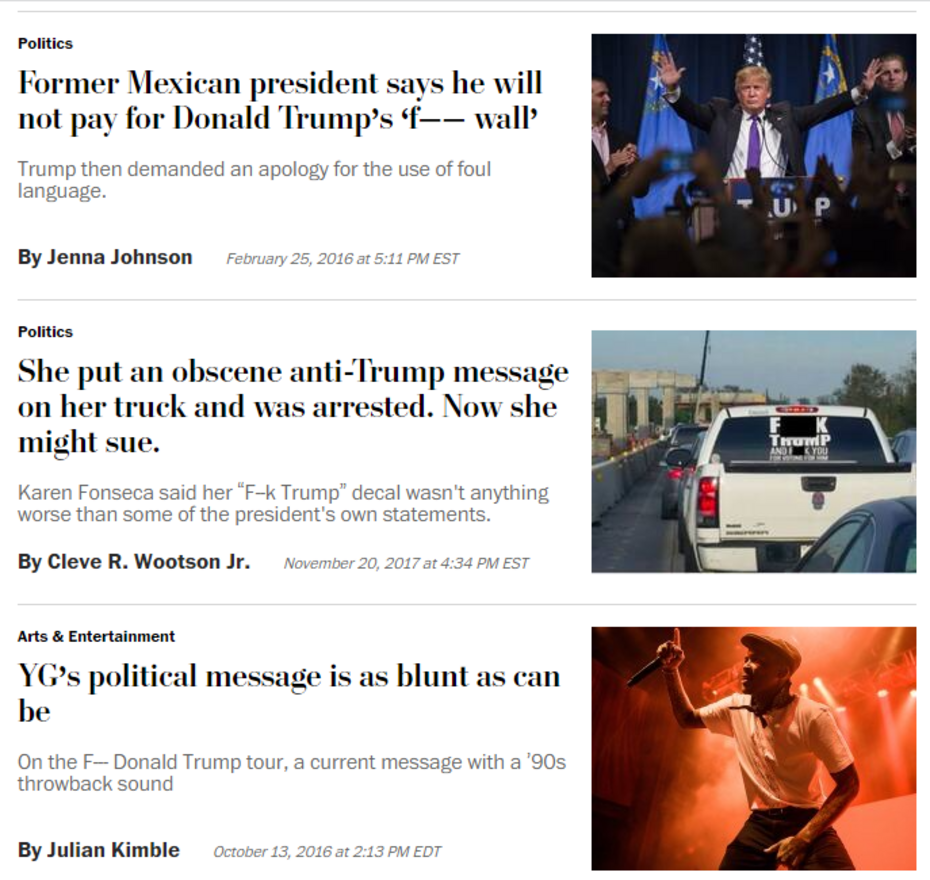 Yet the problem with the Post’s report didn’t stop there. According to Parker and Wolf, “one of Biden’s political superpowers was his sheer inoffensiveness” and he was “increasingly becoming an object of hatred to many Trump supporters.”

Back in reality, Biden’s approval rating is hitting new lows with seemingly every poll that comes out. The RealClear Politics average currently has his approval underwater at 42.3 percent and his disapproval at 52.1. So, it’s more than just Trump supporters that have an issue with the President. And while they touted Biden’s “inoffensiveness,” they omitted how he once threatened to beat up an auto-worker who confronted him at a factory.

Of course, despite being out of the spotlight and out of office, it was all Trump’s fault; blaming it on the “norm-breaking and vulgarity of the Trump era.”

They also attempted to memory hole the paper’s own support for such profanities against a president and pretended they’ve never seen anything like it before, even during the Trump years:

Boos, jeers and insults are nothing new for politicians, especially those who reach the White House. Former presidents George W. Bush and Barack Obama, as well as Trump, were all heckled, weathering protests along their motorcade routes and at some of their events. At one 2011 fundraiser in Los Angeles, a heckler called Obama the Antichrist; “F— Trump” graffiti adorned some walls in Washington.

The current eruption of anti-Biden signs and chants, however, is on another level, far more vulgar and widespread.

Really? Please tell that to the ashes of all the Trump effigies that were burned and the bloody head deranged “comedian” Kathy Griffin held up when she was channeling the spirit of ISIS against Trump. That’s not to mention the literal riot that broke out after his inauguration.

Parker and Wolf even clutched their pearls over the non-vulgar “Let’s go Brandon” chant that has grown in popularity after an NBC Sports reporter tried to gaslight the country at a NASCAR race. They claimed the reporter was only joking about a “F— Joe Biden” chant being about victorious driver Brandon Brown.

“”rump supporters instantly saw signs of a coverup, claiming on social media that journalists were deliberately censoring anti-Biden sentiment,” they huffed, trying to twist the truth.

After going on for paragraphs blaming Trump some more, whining about “Let’s Go Brandon” merchandise, and how Biden has to look at it all, the article ended with the pair decrying how a New Jersey woman was fighting her local authorities to keep her vulgar anti-Biden banners in her yard. But as noted above, the Post promoted a woman’s fight to keep a vulgar anti-Trump sticker on her truck.

And beyond the vulgarities, they didn’t even approve of signs that stated the facts about Biden’s failing record as president:

On a quiet street south of downtown Boise, Michael Dick has festooned his front yard with homemade signs, including a large yellow placard that facetiously thanks President Biden for a growing list of grievances — $4-a-gallon gas, inflation, Afghanistan, covid-19. In capital letters in black marker, Dick, 59, recently added “dead civilians” and “dead U.S. soldiers” to his bill of particulars.

That’s how they start their piece, griping about a factual sign. So obviously, this was all an attempt to defend the man the media helped to put in office.