Exclusive: Over 50% of voters in new poll say Big Tech interfered in 2020 election

The Post uncovered emails indicating that then-candidate Joe Biden’s son, Hunter Biden, “pursued lucrative deals involving China’s largest private energy company — including one that he said would be ‘interesting for me and my family.’” The story hit shortly before the 2020 election and Twitter and Facebook both took action against the Post China bombshell much like they had for a similar Hunter Biden scandal involving dealings in Ukraine. The Post account was censored, sharing the story was restricted and Twitter suspended users for even sharing the story. 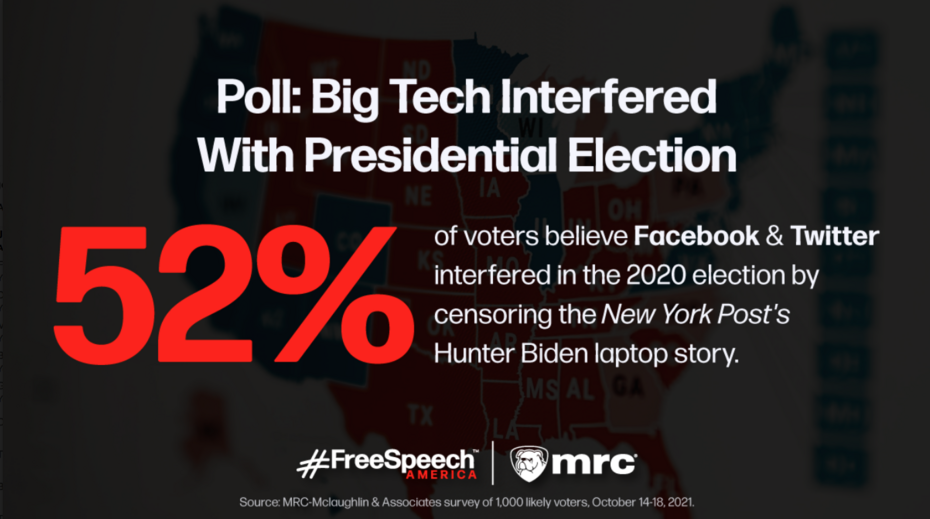 Americans’ reactions to the social media censorship were part of the National Omnibus survey of 1,000 voters, and the findings spoke volumes. When asked “Do you believe Facebook, Twitter, and other social media sites’ censoring of the now-confirmed Hunter Biden email story constitutes election interference?” 51.8 percent responded, “Yes.” Just 32.2 percent responded, “No” — nearly a 20 percent difference. An additional 15.9 percent said they didn’t know.

Nearly half of the respondents — 49.2 percent — also said it wasn’t “appropriate for Facebook and Twitter to block this story about Joe Biden from being seen by their users before the election.”

There were other interesting findings in the poll. Some American voters appear to have bought the media’s storyline at the time that the since-confirmed Hunter Biden story was the result of Russian disinformation.

In one damning poll result, 29.6 percent of those polled said that had they been aware of the “evidence Joe Biden lied about his knowledge of his son Hunter’s overseas business dealings,” they would have been “less likely” to vote for him. 15.6 percent of Democrats said this would have made them less likely to vote for Joe Biden.

This is not the first time that McLaughin & Associates revealed evidence that Big Tech stole the 2020 election by covering for Hunter Biden.

NewsBusters reported on previous McLaughlin & Associates research in late 2020 regarding Biden’s China scandal, which indicated that 36 percent of Biden voters were NOT aware of the evidence linking Joe Biden to corrupt financial dealings with China through his son Hunter. Thirteen percent of these voters (or 4.6 percent of Biden’s total vote) said that had they known these facts, they would not have voted for the former vice president.

“It is an indisputable fact that the media stole the election. The American electorate was intentionally kept in the dark. During the height of the scandal surrounding Hunter Biden’s foreign dealings, the media and the big tech companies did everything in their power to cover it up. Twitter and Facebook limited sharing of the New York Post’s reports, and the liberal media omitted it from their coverage or dismissed it as Russian disinformation.”