(Natural News) According to a pair of lawsuits made public on Tuesday, Facebook board members overpaid the Federal Trade Commission (FTC) an extra $5 billion in fines to settle a complaint by the agency and keep CEO Mark Zuckerberg from being held personally liable for the Cambridge Analytic data breach. The lawsuits claim the massive payment was contingent upon the FTC dropping plans to sue Zuckerberg and COO Sheryl Sandberg.

The lawsuits, filed by two groups of Facebook shareholders in Delaware’s Chancery Court, maintain that in early 2019, a draft complaint from the FTC listed both Zuckerberg personally and Facebook as co-defendants. The complaint asserts that Facebook’s lawyers had determined the company was looking at a fine of close to $107 million but instead agreed to pay a $5 billion penalty to the FTC to shield Zuckerberg and Sandberg. Two democrats—Commissioners Rohit Chopra and Rebecca Kelly Slaughter—voted against the settlement, stating Zuckerberg should have been held personally responsible. Citing internal discussions among the social media giant’s board members authorizing the massive overpayment of the FTC fine, one of the lawsuits declares:

“Zuckerberg, Sandberg, and other Facebook directors agreed to authorize a multi-billion settlement with the FTC as an express quid pro quo to protect Zuckerberg from being named in the FTC’s complaint, made subject to personal liability, or even required to sit for a deposition.”

The claim points out that on the same day the FTC settlement was announced—the largest settlement in U.S. history—the Securities and Exchange Commission (SEC) issued a statement saying it would fine Facebook $100 million as part of a settlement related to its investigation into the company’s handling of the data. Since the settlements, privacy and misinformation have remained an issue across Facebook and its other platforms, along with harassment and double standards for elite users, according to a recent WSJ series.

With Facebook admittedly neglecting to keep user privacy promises for nearly a decade, the second lawsuit claims the company failed in its obligation to protect the private data of its users. Neglecting to notify any of its 530 million customers that their information had been exposed, the lawsuit quotes an internal memo stating Facebook’s intention to minimize the Cambridge Analytics situation and not take measures to address it properly. The claim describes the social media monster’s plan to “normalize the fact that this [scraping of user data] activity is ongoing and avoid criticism that we aren’t being transparent about particular incidents.” The lawsuit declares:

Facebook thereby deliberated that it would not attempt to comply with its obligations to safeguard user data, further reflecting the company’s pervasive internal governance failures and the Individual Defendants’ continuing breaches of fiduciary duty.

The Backstory of FTC Investigation

The FTC began investigating Facebook (again) in 2018 after the company admitted Cambridge Analytics had captured data from close to 87 million of its users without their permission. The agency’s probe focused on whether Facebook had violated a legal agreement with the U.S. government to keep its user’s data private. As part of the company’s 2019 agreement with the FTC, Facebook agreed to establish a privacy committee (which also covers Instagram and WhatsApp) and appoint officers in charge of the privacy program. With these and other actions, the FTC hoped to take some power away from Zuckerberg, who owns approximately 14 percent of the company’s stock. In one of the lawsuits, shareholders maintain:

“The Board has never provided a serious check on Zuckerberg’s unfettered authority. Instead, it has enabled him, defended him and paid billions of dollars from Facebook’s corporate coffers to make his problems go away.”

Insider trading allegations revealed in the partially redacted lawsuits show hundreds of billions of dollars made by key Facebook insiders. Detailing the overwhelming gains realized by each Facebook player, the lawsuit states:

“Instead of providing the market with correct information, as they were obligated to do under their duties as fiduciaries of the Company, the Insider Trading Defendants used their knowledge of Facebook’s material, non-public information to sell their personal holdings while they knew the company’s stock was artificially inflated during the Relevant Period (June 26, 2013, through July 23, 2019). As officers and directors of Facebook, the Insider Trading Defendants were privy to material, non-public information about the true state of Facebook’s business and operations.”

The bombshell revelations came about following a February 10, 2021 decision by Delaware Chancery Court Judge Joseph Slights III. The judge ruled that Facebook had to furnish some internal files, including board-level notes and emails, to Rhode Island’s public employee pension fund, which began questioning how the company came to its settlement terms with the FTC following the agency’s extensive investigation of Facebook’s misuse of consumer data. Slights stated the pension fund “is right to question whether internal communications among” Facebook executives and directors “might shed light on the board’s thinking in this regard.” The judge acknowledged that Facebook had already turned over thousands of documents about the Cambridge Analytica disturbance but added:

“[The current documents] provide no insight into why Facebook would pay more than its (apparently) maximum exposure to settle a claim.” 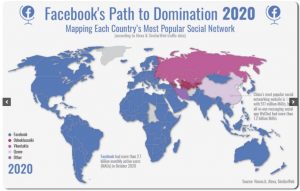 Previous :Western governments have proven their complicity in the destruction of their own peoples
Next : Biden’s fake White House set located across the street from real White House
Receive Our Free Email Newsletter