(Natural News) NewsGuard, the establishment “news rating” project that claims to fight untrustworthy media outlets, continues to give its seal of approval to establishment media outlets, including the New York Times, that spread the hoax story that mounted border patrol agents used whips against Haitian migrants.

Both the New York Times and Axios have corrected the bogus “whipping” claim, but it continues to be repeated by establishment media outlets including Reuters, Business Insider, and Yahoo News.

We deleted a previous tweet that referred to Border Patrol agents as whipping at Haitian migrants.

The story has been updated to include comments from some journalists on the border who did not see whipping occur.

“We’re keeping a close eye on this story, as we typically do whenever there’s a disputed story that is covered widely by news sources, to see how different sources apply their practices for correcting or clarifying errors, or fail to do so,” said a NewsGuard representative.

“If a site publishes a demonstrably false claim and fails to correct it, and especially if that failure is part of a larger pattern of failing to correct errors, that absolutely would impact their rating from NewsGuard.”

The representative said that NewsGuard continues to “assess exactly what claim the publication[s] made, whether it is demonstrably false, and whether it was clarified in a transparent manner, and if not, whether the failure to do so is part of any larger pattern.”

NewsGuard maintains a list of news outlets it considers “trustworthy” and “untrustworthy,” data which it uses in a browser extension that users can add on to various mainstream browsers, including Google Chrome and Microsoft Edge.

In 2019, NewsGuard partnered with Microsoft in a deal that made it a default extension on Edge Mobile browsers.

Currently, the green stamp of NewsGuard’s approval continues to be displayed next to links that continue to falsely allege that border patrol agents were “whipping” the migrants.

Meanwhile, publications that fact-checked the error, such as Breitbart News, get NewsGuard’s red warning label, with readers warned about “false and misleading claims.” Other publications that reported the hoax as a hoax, such as the Epoch Times and TownHall.com, receive similar treatment from NewsGuard. 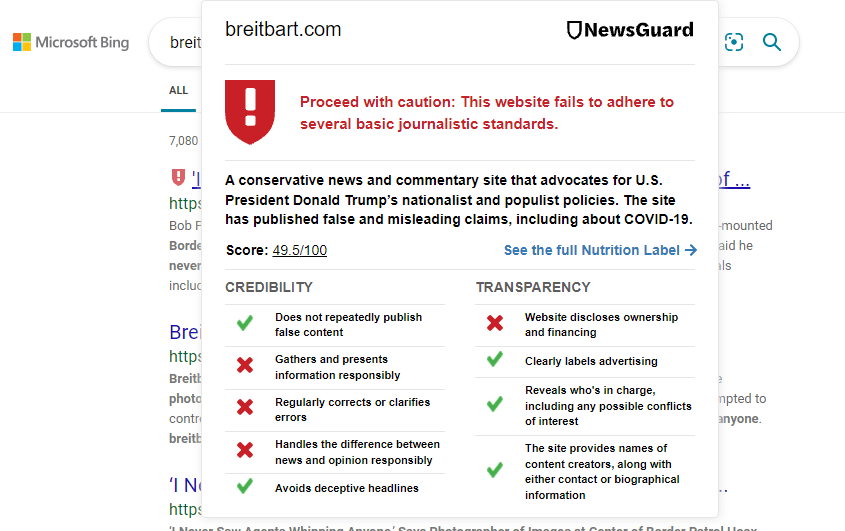 Earlier this month, Breitbart News reported that NewsGuard had yet to take any action against Rolline Stone for spreading the unverified claim that Oklahoma hospitals were filling up due to Ivermectin overdoses.

Previous :This is a great example of the CDC’s real priorities
Next : Lies they told us about COVID
Receive Our Free Email Newsletter

More than half of Border Patrol agents could be fired for refusing covid jabs, leaving border wide open to endless invasion
Biden canceled wall along U.S.-Mexico border leading to current crisis but he has no problem authorizing one to be built around one of his Delaware homes
Open borders policies are really just are a child trafficking operation run by Democrats
Texas Gov. Greg Abbott says border situation worsening into “a firing war” as cartel members take shots at National Guard, law enforcement
New York Times issues correction after claiming Border Patrol used horse reins to strike at migrants
SHOCK: NewsGuard yet to ding establishment media for border patrol whipping hoax
Photographer says viral border patrol photo was misconstrued, nobody was whipped
Lara Logan says she’s been told migrant crisis at border perfect cover for someone to sneak in a bioweapon
DHS is now releasing thousands of Haitians into the country after they crossed illegally from Mexico
Migrant invasion of U.S. worsens as 10,000 Haitians crowd under Texas bridge and lawmaker calls on governor for answers