(Natural News) Last week, Michael A. Sussmann, a partner in Perkins Coie, a law firm representing the Hillary Clinton campaign and the Democratic National Committee, was indicted by a federal grand jury on charges of making false statements to the FBI about his clients and their motives behind planting the rumor, at the highest levels of the FBI, of a secret Trump-Russia server. After a months-long investigation, the FBI found no merit to the rumor.

The grand jury indicated in its lengthy indictment that several people were involved in the alleged conspiracy to mislead the FBI and trigger an investigation of the Republican presidential candidate — including Sullivan, who was described by his campaign position but not identified by name.

White House National Security Adviser Jake Sullivan figures prominently in a grand jury investigation run by Special Counsel John Durham into an alleged 2016 Hillary Clinton campaign scheme to use both the FBI and CIA to tar Donald Trump as a colluder with Russia, according to people familiar with the criminal probe, which they say has broadened into a conspiracy case.

Sullivan is facing scrutiny, sources say, over potentially false statements he made about his involvement in the effort, which continued after the election and into 2017. As a senior foreign policy adviser to Clinton, Sullivan spearheaded what was known inside her campaign as a “confidential project” to link Trump to the Kremlin through dubious email-server records provided to the agencies, said the sources, who spoke on condition of anonymity.

To mine the data, the Clinton campaign enlisted a team of Beltway computer contractors as well as university researchers with security clearance who often collaborate with the FBI and the intelligence community. They worked from a five-page campaign document called the “Trump Associates List.”

The tech group also pulled logs purportedly from servers for a Russian bank and Trump Tower, and the campaign provided the data to the FBI on two thumb drives, along with three “white papers” that claimed the data indicated the Trump campaign was secretly communicating with Moscow through a server in Trump Tower and the Alfa Bank in Russia. Based on the material, the FBI opened at least one investigation, adding to several others it had already initiated targeting the Trump campaign in the summer of 2016.

The indictment states that Sussmann, as well as the cyber experts recruited for the operation, “coordinated with representatives and agents of the Clinton campaign with regard to the data and written materials that Sussmann gave to the FBI and the media.”

One of those campaign agents was Sullivan, according to emails Durham obtained. On Sept. 15, 2016 – just four days before Sussmann handed off the materials to the FBI – Marc Elias, his law partner and fellow Democratic Party operative, “exchanged emails with the Clinton campaign’s foreign policy adviser concerning the Russian bank allegations,” as well as with other top campaign officials, the indictment states.

The sources close to the case confirmed the “foreign policy adviser” referenced by title is Sullivan. They say he was briefed on the development of the opposition-research materials tying Trump to Alfa Bank, and was aware of the participants in the project. These included the Washington opposition-research group Fusion GPS, which worked for the Clinton campaign as a paid agent and helped gather dirt on Alfa Bank and draft the materials Elias discussed with Sullivan, the materials Sussmann would later submit to the FBI. Fusion researchers were in regular contact with both Sussmann and Elias about the project in the summer and fall of 2016. Sullivan also personally met with Elias, who briefed him on Fusion’s opposition research, according to the sources.

Sullivan maintained in congressional testimony in December 2017 that he didn’t know of Fusion’s involvement in the Alfa Bank opposition research. In the same closed-door testimony before the House Intelligence Committee, he also denied knowing anything about Fusion in 2016 or who was conducting the opposition research for the campaign.

“Marc [Elias] … would occasionally give us updates on the opposition research they were conducting, but I didn’t know what the nature of that effort was – inside effort, outside effort, who was funding it, who was doing it, anything like that,” Sullivan stated under oath. 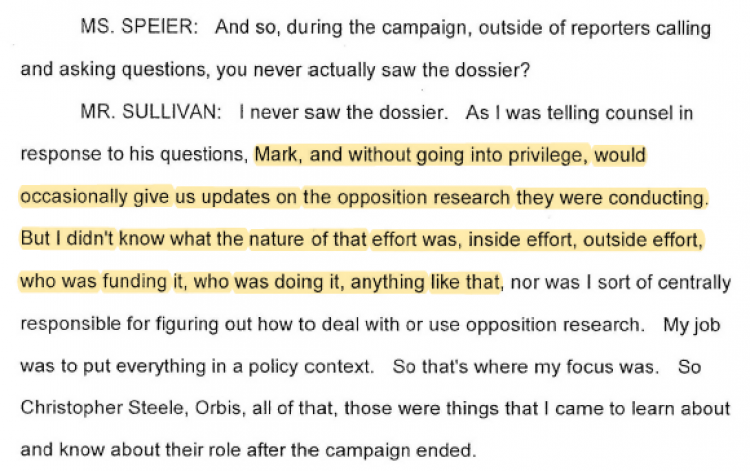 Sullivan also testified he didn’t know that Perkins Coie, the law firm where Elias and Sussmann were partners, was working for the Clinton campaign until October 2017, when it was reported in the media as part of stories revealing the campaign’s contract with Fusion, which also produced the so-called Steele dossier. Sullivan maintained he didn’t even know that the politically prominent Elias worked for Perkins Coie, a well-known Democratic law firm. Major media stories from 2016 routinely identified Elias as “general counsel for the Clinton campaign” and a “partner at Perkins Coie.”

“To be honest with you, Marc wears a tremendous number of hats, so I wasn’t sure who he was representing,” Sullivan testified. “I sort of thought he was, you know, just talking to us as, you know, a fellow traveler in this — in this campaign effort.”

Although he acknowledged knowing Elias and his partner were marshaling opposition researchers for a campaign project targeting Trump, Sullivan insisted, “They didn’t do something with it.” In truth, they used the research to instigate a full-blown investigation at the FBI and seed a number of stories in the Washington media, which Elias discussed in emails.

Lying to Congress is a felony. Though the offense is rarely prosecuted, former Special Counsel Robert Mueller won convictions of two of Trump’s associates on charges of that very offense.

An attorney for Sullivan did not respond to questions, while a spokeswoman for the National Security Council declined comment. After the 2016 election, Sullivan continued to participate in the anti-Trump effort, which enlisted no fewer than three Internet companies and two university computer researchers, who persisted in exploiting nonpublic Internet data to conjure up “derogatory information on Trump” and his associates, according to the indictment.

Prosecutors say the operation ran through at least February 2017, when Sullivan met with another central figure in the plot to plant the anti-Trump smear at the FBI. But now the goal was to compel agents to continue investigating the false rumors in the wake of the election, thereby keeping Trump’s presidency under an ethical cloud.

On Feb. 10, 2017, Sullivan huddled with two Fusion operatives and their partner Daniel Jones, a former FBI analyst and Democratic staffer on the Hill, to hatch the post-election plan to resurrect rumors Trump was a tool of the Kremlin. As RealClearInvestigations first reported, the meeting, which lasted about an hour and took place in a Washington office building, also included former Clinton campaign chairman John Podesta. The group discussed raising money to finance a multimillion-dollar opposition research project headed by Jones to target the new president. In effect, Jones’ operation would replace the Clinton campaign’s operation, continuing the effort to undermine Trump.

It’s not clear if Sussmann attended the Feb. 10 meeting, but he was apparently still involved in the operation, along with his crew of data miners. The day before the meeting attended by Sullivan, Sussmann paid a visit to the CIA’s Langley headquarters to peddle the disinformation about the secret server – this time to top officials there, according to the sources familiar with Durham’s investigation. During a roughly 90-minute meeting, Sussmann provided two officials at the intelligence headquarters “updated” documents and data he’d provided the FBI before the election, RealClearInvestigations has learned exclusively.

Then, on March 28, 2017, Jones met with the FBI to pass on supposedly fresh leads he and the cyber researchers had learned about the Alfa Bank server and Trump, and the FBI looked into the new leads after having closed its investigation a month earlier. That same month, FBI Director James Comey publicly announced the bureau was investigating possible “coordination” between Moscow and the newly sworn-in president’s campaign.

Despite the renewed push by Jones, the FBI debunked the tip of a nefarious Russian back channel. Agents learned the email server in question wasn’t even controlled by the Trump Organization. “It wasn’t true,” Mueller confirmed in 2019 testimony.

Read more at: RealClearInvestigations.com and Conspiracy.news.

James Martinez talks about pedophiles in the CIA – Brighteon.TV
CIA pedos walk free after DOJ refuses to prosecute: FOIA
RFK Jr.: CIA-led ‘military response’ to pandemic was meant to drive democracy from the world and usher in global totalitarianism
Pfizer CEO: People who spread ‘misinformation’ should be jailed – CIA & FBI are helping us
New owner of Politico accepted millions from the CIA to print state propaganda
The ‘Russia Hoax’: It all began with Hillary
Was Facebook whistleblower just a CIA PSYOP? Haugen’s attorney is former intelligence officer with ties to Trump-Ukraine impeachment, Hillary Clinton, Chuck Schumer
Biden security adviser Jake Sullivan tied to alleged 2016 Clinton scheme to co-opt the CIA and FBI to tar Trump
Students among 1,500 Americans still trapped in Afghanistan
While Afghanistan fell, military and CIA focused on diversity