(Natural News) On Friday morning, the British medical journal The Lancet proudly announced on Twitter, “Our new issue is here! On the cover—’Periods on display’ and the cultural movement against menstrual shame and #PeriodPoverty…”

As if that wasn’t ridiculous enough, the attached image of the issue cover simply highlighted the text, “Historically, the anatomy and physiology of bodies with vaginas have been neglected.” 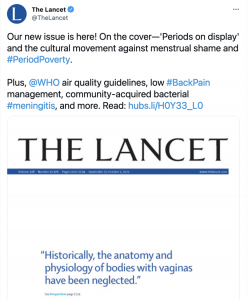 Is that what women have been reduced to? “Bodies with vaginas”? Along with the ghastly quote the cover highlighted, the featured article also used the terms “menstruators” and “people who menstruate.”

Out of sensitivity to a tiny fraction of the population who might not want to identify with their true sex, Lancet offended half the population. They effectively erased women and lost any remaining shred of scientific credibility in the process. The response was furious.

Editor-in-Chief Richard Horton responded to the outrage about the cover on September 27 thanking “all those who have responded to the words on this week’s Lancet cover” and claiming to “understand the strength of feeling it has provoked.” He admitted the journal “conveyed the impression that we have dehumanised and marginalised women,” but said “this would never have been our intention” as “The Lancet strives for maximum inclusivity of all people in its vision for advancing health.”

Instead of apologizing for the quote itself, he wrote, “I apologise to our readers who were offended by the cover quote and the use of those same words in the review.”

Then he acknowledged the real reason for the butchering of the English language:

But, of course, their intersectional conflation of two very different issues was the problem. Any healthcare difficulties transgender people face for their condition is quite different from women’s health.

To redirect attention away from their erasure of women, he turned the article into a call to serious action “against menstrual shame and period poverty:”

The exhibition review from which The Lancet cover quote was taken is a compelling call to empower women, together with non-binary, trans, and intersex people who have experienced menstruation, and to address the myths and taboos that surround menstruation. The review, like the exhibition, puts these myths and taboos into historical context. The review calls for greater efforts to overcome the lack of knowledge and stigma too often associated with menstruation. These are serious issues that demand serious actions. We encourage people to read the full review and support a growing movement against menstrual shame and period poverty.

I did read the full review and that’s not really what the piece was about. The article “Periods on display” by Sophia Davis was a review of the exhibition Periods: A Brief History at the Vagina Museum in London, UK.

“Period poverty” (lack of access to feminine products) wasn’t mentioned in context of the exhibit, only in a recounting of other recent works about menstruation. There was discussion of historical myths and taboos surrounding periods, but nothing about action taken against shame and stigma as a movement today.

If there was any main message or call to action, it was a silly endorsement of “the importance of physical places like museums” and for further funding for the Vagina Museum which is “now threatened with closure.”

The article was actually terribly written and sounded more like a middle schooler’s report after a field trip, with sentences like: “Having never seen these objects before, encountering them gave me a deeper understanding of what life was like when menstruating before the convenience of tampons and menstrual cups.”

“Punctuating the display are various artworks: enormous custom-made menstrual cups and tampons, complete with red sequins that glitter as if in defiance of the centuries of negativity; standing in front of them felt like a celebration.”

I couldn’t believe this article was accepted in a medical journal, never mind featured as the cover story.

The Lancet has beclowned itself repeatedly in the name of wokeness and, sadly, it’s not alone. This is just another reason why people don’t trust “The Science.”