Some of these tax increases include:

Raising taxes on working families by increasing the federal corporate income tax rate from 21 percent to 26.5 percent. This tax increase will be passed along to working families in the form of higher prices, fewer jobs, and lower wages. This will give the U.S. a combined state-federal rate of 30.9 percent, higher than our foreign competitors including China, which has a 25 percent corporate tax rate, and Europe which has an average rate of 21.7 percent. The developed world average (OECD) is 23.5%. 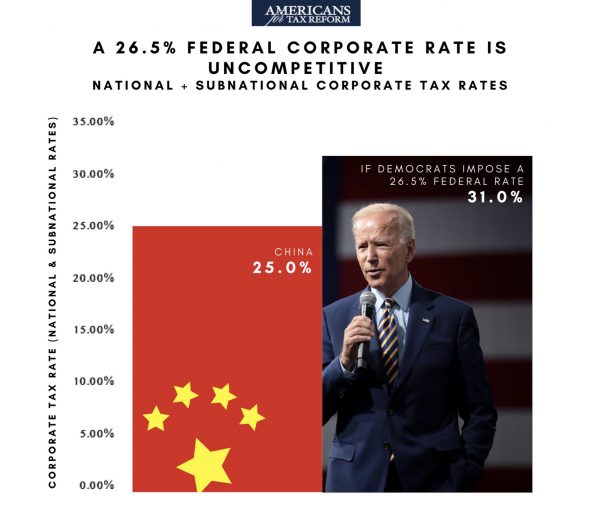 According to the Stephen Entin of the Tax Foundation, labor (or workers) bear an estimated 70 percent of the corporate income tax in the form of wages and employment. Similarly, a 2020 study by the National Bureau of Economic Research found that 31% of the corporate tax falls on consumers.

A corporate tax increase will threaten the life savings of families by reducing the value of publicly traded stocks in brokerage accounts or in 401(k)s. Individual investors opened 10 million new brokerage accounts in 2020 and at least 53% of households own stock. In addition, 80 million to 100 million people have a 401(k), and 46.4 million households have an individual retirement account

Raising the corporate income tax rate will hit Americans with higher utility bills as the country tries to recover from the pandemic. Customers directly bear the cost of corporate income taxes imposed on utility companies. Investor-owned electric, gas, and water companies must get their billing rates approved by the respective state utility commissions. Therefore, if Democrats raise the corporate tax rate, they will have voted to raise utility bills. [Americans for Tax Reform has compiled 300 examples of utilities passing tax savings along to customers.]

Increasing the death tax by cutting the exemption level in half and modifying valuation rules. This will raise taxes on family-owned businesses and farms across the country.

Retroactively raising taxes on taxpayers claiming the conservation easement deduction. It would apply this retroactively back to Notice 2017-10 released on December 23, 2016, so would impact taxpayers in tax years 2016, 2017, 2018, 2019, 2020, 2021 and for future years. If lawmakers want to make changes to the conservation easement deduction, they should do so as part of a net tax cut and prospectively, not retroactively.

This proposal will reduce access to new, lifesaving and life-preserving medicines. According to research by the Galen Institute, the U.S. had access to 90 percent of new cures launched between 2011 and 2018, a rate far greater than comparable foreign countries. For instance, The United Kingdom had access to 60 percent of medicines, Japan had 50 percent, and Canada had just 44 percent.

It will also threaten high-paying manufacturing jobs across the country at a time when we are just emerging from the economic wreckage from the pandemic. Pharmaceutical manufacturers invest $100 billion in the U.S. economy every year, directly supporting 800,000 jobs including jobs in every state.

$80 billion in new IRS funding to hire 87,000 new agents. This would allow the IRS to audit and harass small businesses and American families for an additional $787 billion. It would hire enough new IRS agents to fill Nationals Park twice.

It would help implement the Biden plan to create a new comprehensive financial account information reporting regime which would force the disclosure of any business or personal account that exceeds $600. Not only would this include the bank, loan, and investment accounts of virtually every individual and business, but it would also include third-party providers like Venmo, CashApp, and PayPal.