Even with draconian lockdowns and travel restrictions, Australia’s covid “cases” are now skyrocketing… is the science WRONG?

(Natural News) Something terrifying is happening in Australia. Officers of the law are dutifully carrying out the plans of the globalists and enforcing insidious rules that violate the very people they are supposed to serve. Australia has turned into a prison camp, with draconian lockdowns, bodily requirements and travel restrictions. Medical martial law has become a normal way of life, and Australians are being held down until the majority are inoculated with bioweapon vaccine experiments.

Australian governments continue to prescribe tyranny for endemic infections, and the result is always the same. As more people are locked up, the case numbers skyrocket. Australians have followed the science to a tee, but the population is getting sicker, more depressed and more violent than ever before.

Is the science wrong? Of course, it is.

Lockdowns put many people in a state of fight or flight, as their careers and livelihoods are threatened. Lockdowns put more stress on people who are trying to make ends meet, limiting their opportunities and ability to interact. As rights are stripped, people are threatened to comply with bodily demands at every turn, raising blood pressure, increasing stress hormones. Grieving people need other people there for them; isolation can kill. Children and adolescents need human interaction; a lack of friendship and stability can cause depression and anxiety which can lead to suicide. All these government-generated problems break down the psychology of people and weaken their ability to adapt to the world around them. In this tyrannical environment of suppression, people get sicker in the mind and in the body.

Australia continues to set new daily records for infection, despite adhering to strict, ongoing lockdowns. From Victoria and Queensland, to New South Whales and Greater Brisbane, to South and Western Australia and the Greater Sydney region, Australia is locking people in their homes, restricting human interaction and isolating people like never before. But the nation is getting sicker and hospitalizations continue to climb. Australia beat its daily record with 914 recorded infections, and the curve never seems to flatten. The lockdowns have not worked since the beginning, and infections spike as soon as the tyranny is enacted, but governments continue on the same path, never learning, never relinquishing their ill-gotten power. In fact, Victoria is on its sixth lock down and hundreds of thousands of people are in revolt. 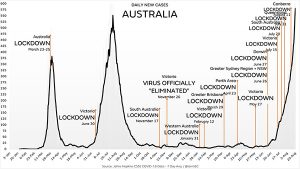 Vaccines cannot protect against the problems caused by vaccines, the medical system and the government

Prime Minister Scott Morrison has considered an end to the lockdowns but told the media that cannot happen until 70 percent of the population is fully vaccinated. What does it mean to be “fully vaccinated” anyway? Coronavirus vaccine programs continue to fail across the world and new boosters are now being forced onto people who were already considered protected.

“You can’t live with lockdowns forever and at some point, you need to make that gear change, and that is done at 70%,” Prime Minister Scott Morrison said in a television interview on the Australian Broadcasting Corp’s Insider program. Morrison believes that the rights of people are actually privileges granted by the government. In this way, the population can be subjugated into perpetuity. The Australians are beginning to learn that their rights are inherent, sovereign, that they come from God and are enforced through noncompliance and faith.

The level of coercion being used to force vaccinate people in Australia is inhumane; as it has been around the world. The world cannot be sterilized from respiratory infections, especially when the vaccines shed spike proteins and cause new mutations to manifest.

The “science” will not save anyone from COVID because the science of today looks a lot like tyranny and genocide.

Previous :Facebook tries to “save face” by exonerating the “Disinformation Dozen” who are internationally censored, slandered, defamed for telling the truth about vaccine injuries
Next : Communist Biden regime plans to put “antivaxxers” on “no gun list” so Americans can’t defend themselves from CDC internment camps
Receive Our Free Email Newsletter