(Natural News) A Western Sydney official has compared the latest anti-Covid measures imposed on his area by the New South Wales (NSW) state government to the times of Nazi Germany. His comment, since removed, caused a rumpus on social media.

Mayor Steve Christou, of Cumberland City Council, tweeted an official graphic illustrating new lockdown rules on Friday. Having posted the image that warned residents of the mandate that requires them to have a permit to leave the region and to register their personal details to be allowed to visit a “singles buddy” within a five-kilometer (three-mile) reach, he wrote: “Welcome to Nazi Germany.” The comment from the councilor, who describes himself as having “a tendency to speak what I think,” was later deleted. 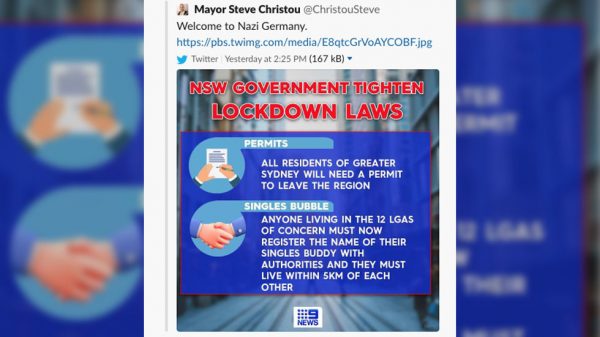 The official has previously expressed his opposition to the tightening of lockdown rules and any mandatory vaccination, describing the situation as “dictatorial madness.”

His latest provocative tweet was publicly available for long enough to elicit an array of reactions.

Welcome to the end of your political career.

Here’s a good bit of advice; never use Nazi Germany as comparison for anything. Resign and take a lesson in Ethics.

Some dubbed it “disgusting“ and “offensive“ to Holocaust survivors, while others called on Christou to delete it. In contrast, there were those who apparently supported him.

Nazi Germany would be an improvement….

A number of commenters called for the mayor to step down, among them the NSW Minister for Police and Emergency Services, David Elliott, who said the comment was “the most abhorrent thing.”

Under the latest changes to the lockdown rules, residents of several areas of Greater Sydney, including Cumberland, have had their permitted travel radius reduced by half. Those wishing to go beyond that would have to apply for a permit. Only one person from each household, except in special circumstances, is allowed to leave home at any one time to undertake essential errands. Hundreds of defense force personnel, including heavily armed riot squad officers, have been deployed to ensure compliance with the rules. An additional 500 troops will patrol Sydney’s residential areas from Monday, as NSW’s law enforcement agencies launch their stay-at-home operation. Roadblocks have been installed, with police stopping drivers to check their identification documents in a major compliance exercise.

Adding to the public outrage and frustration, the announcement of the statewide lockdown was made by authorities on social media, rather than at an official press conference.

As someone with many family members in regional NSW I find it appalling a statewide lockdown is announced on Twitter. Yes let’s protect them but also show some respect – I’m sure there was time in today’s 45 min presser for a mention! #nswcovid #nswlockdown #nswcovid19

As the region was plunged deeper into lockdown, NSW Premier Gladys Berejiklian said the situation was the worst “the state had been in since day one.” The authorities say the hardline measures are essential to deal with the worsening Covid-19 situation in the region, where 466 new local cases were recorded on Saturday. NSW Police Commissioner Michael Fuller said he wasn’t “apologetic” for imposing “some of the strongest laws, with some of the strongest police action coming,” adding: “Please don’t write in and complain to me. We have given ample warnings and cautions, and that time has gone.”

Read more at: RT.com and MedicalTyranny.com.

Previous :Gender reassignment surgery is child abuse, says Texas commissioner
Next : Why war on unvaccinated is so dangerous for everyone
Receive Our Free Email Newsletter