(Natural News) Throughout the Donald Trump presidency we saw countless attacks against conservatives, from a grown man attacking a teenager for a MAGA hat, to the media attacking a kid with false claims that he was harassing an Indian man…. once again, they based their “interpretations” on the fact that the kid wore a red MAGA hat.

Antifa has attacked free speech rallies and prayer rallies, something they are doing to this day, while both Antifa and BLM have rioted in numerous cities and states every time there is a police related shooting, but only if the suspect shot was black, the others mean nothing to them.

Police have been attacked, politicians have told their followers to harass conservatives, liberals have threated death against Republicans as so-called celebrities like Peter Fonda, even threatened a young child with a cage full of pedophiles, in the case of the president’s son, Baron Trump.

In 2019, the House GOP offered up a political violence report in which we see 7 pages of different types of attacks against conservatives, all separated into categories.

Even that is a not a full or exhaustive list of attacks, but it does offer the pattern of behavior that we are seeing completely ignored in the new Biden DHS Domestic Terrorism Threat report, which is embedded at the bottom of this article. 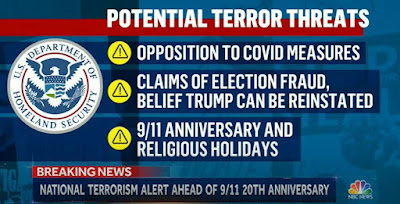 Yes, any of us opposed to the constant threat of lockdowns, medical martial law, mask mandates, forced vaccinations or vaccine passports in order to dine out, go to a gym or watch a movie in a theater, or a Broadway show, etc….. then the Biden regime is listing you as a domestic terror threat.

Also, after four years of liberals, Hollywood, the media and Hillary Clinton screeching that Trump was an “illegitimate” president and howling about “election fraud,”  Trump supporters and/or conservatives that dares question how a man that couldn’t even get decent attendance at a rally, could get 80 million votes, well, they are considered a domestic terror threat.

Topping it all off, we are told that none of this is based on any actual credible “threat.”

You simply cannot make this BS up!

Via the description of the video below:

A DHS bulletin published on Friday said that “anti-government, anti-authority violent extremists” may try to “exploit the emergence of Covid-19 variants by viewing the potential re-establishment of public health restrictions across the US as a rationale to conduct attacks.”

Other potential attackers include “domestic violent extremists” and other “ideologically motivated” individuals who may be triggered by “conspiracy theories” on such issues as “perceived election fraud,” DHS said.

“Law enforcement have expressed concerns that the broader sharing of false narratives and conspiracy theories will gain traction in mainstream environments, resulting in individuals or small groups embracing violent attacks to achieve their desired objectives,” the bulletin claimed.

The two page report (PDF) also includes a section at the bottom of page two on “How We Are responding,” which brings up a number of concerns.

HOW WE ARE RESPONDING

• DHS will continue to identify and evaluate calls for violence, including online activity associated with the spread of disinformation, conspiracy theories, and false narratives, by known or suspected threat actors and provide updated information, as necessary.

• DHS continues to encourage the public to maintain awareness of the evolving threat environment and report suspicious activity.

• DHS is coordinating with state and local law enforcement and public safety partners to maintain situational awareness of potential violence in their jurisdictions and maintain open lines of communication with federal partners.

• More broadly, DHS remains committed to identifying and preventing terrorism and targeted violence while protecting the privacy, civil rights, and civil liberties of all persons.

First, who determines what is and isn’t “disinformation” and “conspiracy theories?”

False narratives: This one is quite tone-deaf as the “intel community,” including the DHS, all pushed the “Russian collusion” hoax for years, which after the Mueller report was released we found out that was a “false narrative.”

Then we see reference to “authoritative sources of information.”

Like who? The media? They pushed the Russian collusion hoax for years! The media also pushed the “17 agencies” all agreed, when it was three and written by the DNI. Some offered corrections, others didn’t.

The “lab leak” theory was also called disinformation and a conspiracy theory. People were censored on social media, and mocked by the MSM, yet now, it is considered a likely theory by the MSM… months and months after Independent Media connected the dots.

For an agency claiming that disinformation could lead to domestic terrorism, to offer an alert that is, in itself, pushing disinformation, is a dangerous game to play. 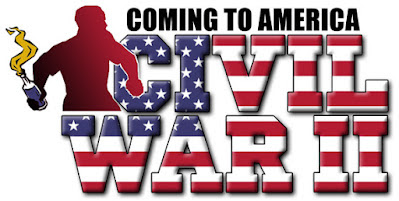 BOTTOM LINE – THEY ARE SETTING US UP

Looking at this alert and other actions the Biden regime has taken, we see their goal which is to set up those of us that are not willing to abide by tyrannical mandates, and who most definitely “question” election results when there have been numerous “irregularities” and the Democrats fighting against audits.

If they were so sure that everything was on the up and up, why wouldn’t they want to prove it?

With the census out, redistricting having begun, and the continued violations of Americans constitutional rights with more and more tyrannical mandates being discussed and implemented in liberal cities and states, there is no doubt that freedom loving Americans are going to push back, protest and fight against their freedoms being stripped.

This Biden regime domestic terrorism alert, is the perfect opportunity for liberals in the federal government to target more conservatives, and others that refuse to comply with unconstitutional mandates.

The are attempting to intimidate freedom fighting Americans into sitting down and shutting up for fear of being labeled a domestic terrorist.

They are setting up those that won’t be intimidated to be declared enemies of the state.

21 0813 Ntas Bulletin All-s… uploaded by All News Pipeline
Read more at: AllNewsPipeline.com and DomesticTerrorism.com.
Previous :Nuclear: FDA knew on October 22, 2020 that the DeathJab would maim and kill, cause heart damage, clotting and ravage children
Next : All of the evidence is in: The covid vaccine is a failure
Receive Our Free Email Newsletter