(Natural News) Texas has officially adopted a resolution condemning the Chinese communist regime’s systematic killing of prisoners of conscience for their organs.

Every year, thousands of individuals from around the world who are desperately ill fly to China, where they can get an organ transplant surgery in as little as two weeks.

In doing so, they may be “unwittingly becoming involved in murder in the form of forced organ harvesting,” reads the resolution, which aims to warn Texans against taking part in transplant tourism.

Known as TX SCR3, the resolution also urges Congress and the president to adopt measures prosecuting those responsible for the abuse, banning them from entering America, and barring U.S. medical and pharmaceutical companies from collaborating with any complicit Chinese counterparts.

The resolution unanimously passed through both chambers of the state legislature. Gov. Greg Abbott signed it on June 7.

“It’s a significant message on behalf of 29 million Texans, that we condemn in the highest terms the conduct of the Chinese government and their human trafficking,” Texas state Rep. Matt Shaheen, the lead sponsor of the resolution, said in a recent interview with NTD, a sister media outlet of The Epoch Times.

“In no way do the tax dollars of 29 million Texans go to support such atrocious behavior and terrible human rights violations.”

Shaheen, a primary sponsor for the House version of the resolution, said he first became aware of the issue around three years ago, when Falun Gong practitioners—a primary target for forced organ harvesting—approached him for help. Some of them hadn’t heard from their detained family members in years, he said.

“[Those were] some meetings I’ll never forget,” Shaheen said, adding that he was “just horrified” upon hearing about “what the Chinese government was doing.”

The meditation discipline Falun Gong was widely popular in China during the 1990s. By state estimates, 70 million to 100 million people were practicing it as of 1999. In July of that year, the Chinese regime, believing its power was threatened by such popularity, launched a nationwide persecution campaign designed to eradicate the faith. Practitioners of Falun Gong have since faced police harassment, detention, physical torture, and organ harvesting.

Shaheen wrote to the Chinese Embassy in Washington demanding to know the whereabouts of the detained families of Texas Falun Gong practitioners, but never heard back, he said.

Dr. Howard Monsour, a gastroenterologist in Granbury who testified to the state Senate on the resolution, said it’s “a very important beginning” in the process of shedding light on the organ harvesting issue and “many other abuses.” 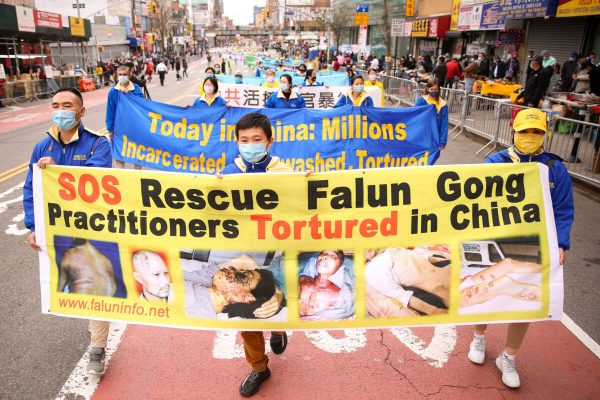 “I don’t think that you can meet any of the people who’ve been tortured, imprisoned in China, and not start to have a feeling of human rights abuses that have occurred and the need to go out and make it public,” Monsour told NTD in late April.

Monsour, who has decades of experience in liver transplantation, said the regime’s organ harvesting practice was “beyond belief.”

“This is something that goes back to Nazi Germany and things they did with the Jews, and the story needs to be told,” he said. “We need to get this out there, and we need to stop this practice.”

About a decade ago, Monsour was the director of a liver cancer program where he met a patient, a Texas resident, whose condition had become too serious to be treated by a liver transplant.

After getting the same response from a number of hospitals, the man flew to China for a liver, priced at $88,000. The man passed away eight months later after his cancer metastasized.

“Yes, we all like to think we are moral individuals. But when we’re faced with death, you know, we’ll try anything,” Monsour said.

“We really have to protect our people from going over and doing this.”

Monsour over the past year has talked with many medical professionals about the issue. Many couldn’t believe it because “it sounds like a horror movie,” he said.

“The look in people’s eyes—people can’t believe it,” he said. “That’s going to be the challenge to get people to believe this, because it sounds so horrific.”

At the state Senate hearing, a survivor of the persecution said he saw an ambulance arrive one night at the prison where he was held. The inmates lay on their beds facing the wall, waiting for their names to be called. Three people were taken from his cell that night and never returned.

Monsour was hopeful that the resolution would help get the word out.

“I don’t think you’ll see any American who—we believe in freedom—will not support to stop what’s going on in China at this time,” he said.

Read more at: TheEpochTimes.com and OrganHarvesting.news

Previous :‘We made a big mistake’ — COVID vaccine spike protein travels from injection site, can cause organ damage
Next : 27 experts launch citizen petition demanding FDA ‘slow down and get the science right’ before approving COVID vaccines
Receive Our Free Email Newsletter