(Natural News) The Merseyside Police force of North West England are banding together to eradicate “offensive” speech that triggers the LGBTQ+ community. The officers have launched an electronic ad campaign that threatens to charge people for civil offenses if they use offensive language.

Four officers posed next to a large sign on the back of a van that says “being offensive is an offence.” The electronic billboard was hoisted outside an Asda supermarket. The sign features a police badge that is superimposed over an LGBTQ rainbow flag. The sign warns the public that Merseyside Police will not tolerate any “hate crime” toward the LGBTQ+ community. Anyone in the LGBTQ+ community who feels triggered by someone else’s views is encouraged to report their hurt feelings to the police. “Come and speak to #TeamBeb,” states the text on the sign. The officers pledge to do whatever they can to support the “victims” of hate speech.

The police department was confronted by multiple citizens who were quick to point out that “offensive” language does not constitute a civil or criminal offense. The Merseyside Police were forced to release a statement clarifying that “being offensive” is not, in itself, an offense.

“A message on an advan and social media this weekend by the Local Policing Team was incorrect,” wrote Superintendent Martin Earl. “We apologize for any confusion this may have caused.”

The superintendent did not altogether dismiss the Orwellian idea of policing language and working to advance the LGBTQ agenda. In his statement, Earl went on to say that the department’s hate crime unit is “well intentioned” and “draws on a wealth of experience and expertise to provide effective and above all, sensitive and appropriate support for victims.” The statement reminded the public that the department is using “third party reporting centers” to monitor for “hate crimes.” (Related: CIA rebrands as woke leftists and champions of “diversity”.)

When police are used to patrol people’s thoughts, gestures and speech, the world is instantly enslaved. If the LGBTQ community can use the police to target people who disagree with them; then a Pandora’s box of Big Brother thought control is opened wide, beckoning a more Orwellian future.

A man who identifies as a woman, for example, may call the police for assistance if they aren’t being allowed in the woman’s restroom. In this brave new world, a store owner could be given a citation. Likewise, a gay man could feel offended by his “intolerant” straight coworkers and report them to the local Merseyside Police. A lesbian woman may not like the way the Bible judges her sexual orientation and could call the police to report Christian “hate crimes.”

“Offensive language” could include any piece of satire, argument, joke or advice that someone doesn’t like. A “victim” of hate crime is often a whiny, controlling person who isn’t getting their way. By using the police as their personal belief enforcement, they get to abuse anyone they disagree with, intimidate anyone they don’t like, while using force to get what they want out of others. As more law enforcement operations give credence to people who are easily offended, they create an environment where people are afraid to speak their truth, where people are afraid to live out their beliefs. A world run by the easily-offended mob is a world of slavery that punishes beliefs and instills universal thought, language and behavior control. 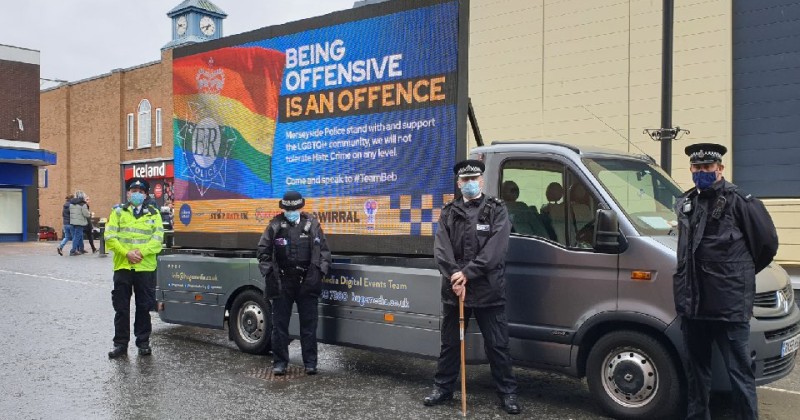