Gina Carano’s firing is inexcusable: Here are 8 famous libs who openly compared conservatives to Nazis and not only were they not fired or canceled, nobody even gave a rip.

(Natural News) So you know by now that Gina “Beautiful Former MMA Fighting B.A. Mandalorian Actress Who Happens To Be Conservative” Carano was fired from the show by Disney for a social media post invoking Nazis to decry cancel culture (irony alert).

With help from our friends at The Daily Wire and Breitbart, here is a list of a whole bunch of libs who did the same dang thing and not only did they not get canceled, no one gave a rip.

Yeah. In September Basement Joe compared President Trump to freaking Joseph Goebbels, the Reich Minister of Propaganda for Nazi Germany and one of the most evil pieces of garbage who ever walked the earth before poisoning his six children with cyanide and then killing himself, landing in hell forevermore.

Biden really just compared Trump to Joseph Goebbels, Nazi propaganda minister and one of the most evil men who ever lived https://t.co/nNXes85BYW pic.twitter.com/bout4ajg75

The Bolshie Bae herself? I’m shocked.

“The United States is running concentration camps on our southern border, and that is exactly what they are – they are concentration camps. And if that doesn’t bother you … I want to talk to the people that are concerned enough with humanity to say that we should not, that ‘never again’ means something.”

In case you’re a balloonhead, “Never again” is a direct reference to the systematic genocide of Jews in the Holocaust. AOC said Trump was duplicating the Jewish Holocaust on the southern border.

What did Mr. Fancy Pants do? Oh, just literally compared Trump to Hitler in 2019, that’s all. Watch:

Compared Trump to Hitler and Mussolini a few months ago:

Beto brooooo did the same thing in October 2019.

“I don’t think that speaking the truth and calling things by their right names is in any way disqualifying in being able to do work going forward,” O’Rourke told Washington Post reporter Robert Costa. “I think sooner rather than later, a majority of Americans — including Republicans — are going to see Trump for who he is, and this administration for what it’s done.”

“Outside of the Third Reich, give me another example of a Western leader who has called people of one faith inherently defective or dangerous or disqualified from being successful in that country.”

“How did a modern country, well-educated, a source of innovation and ingenuity, and a source of moral leadership in the world, descend into that level of barbarity, producing a shame that lives with every single German to this day?”

“Think about that our country now and our commander-in-chief authorized ICE military briefs to literally go to the streets in 10 cities across this country, including New York where we are, and storm and show up and grab families and children. We are going to scary places guys that always happen in other parts of the world and are happening now.”

“These are not MS-13 members. The overwhelming statistics of people coming in are less criminally disposed than the people who live in this country. They are running just like the Jews ran from the Nazis, just like so many other groups are running from persecutions for safety.”

“If you vote for Trump, then you, the voter, you, not Donald Trump, are standing at the border, like Nazis,” he said. “If you vote, you can no longer separate yourself” from the “evilness of Donald Trump.”

Yeah. He compared Trump to Hitler. Are you seeing a pattern here?

“Our democracy teeters on the brink of failure,” the Georgia Democrat said at an event held by the Atlanta NAACP earlier this week. “Americans elected an authoritarian, racist, anti-immigrant strongman to the nation’s highest office.”

Hitler “rode a wave of nationalism and anti-Semitism to power. Replace anti-Semitism with ‘all Latinos crossing our borders are rapists, drug dealers and murderers.’ Does that sound familiar?” Johnson asked, to a chorus of “yeses” from the crowd.

“Americans, particularly black Americans, can’t afford to make that same mistake about the harm that could be done by a man named Hitler or a man named Trump,” he said.

Again with the Trump = Hitler:

.@WhipClyburn (D-SC): “I’m beginning to see what happened in Germany back in the 1930s … I cannot see that happening here. It may happen, but if it did that means that the American people are much more — less, I should say, intelligent than I think they are.” pic.twitter.com/5sIut7r3Wh

“I’m beginning to see what happened in Germany back in the 1930s,” said Clyburn. “I never thought that could happen in this country. How do you elect a person president, then all of a sudden you’re going to give him the authority to be dictator? That’s what Hitler did in Germany.”

She’s an actress. Y’know, like Gina Carano. Just not as famous. Which is why she’s extra credit.

Lookie what she said just 1 month ago: 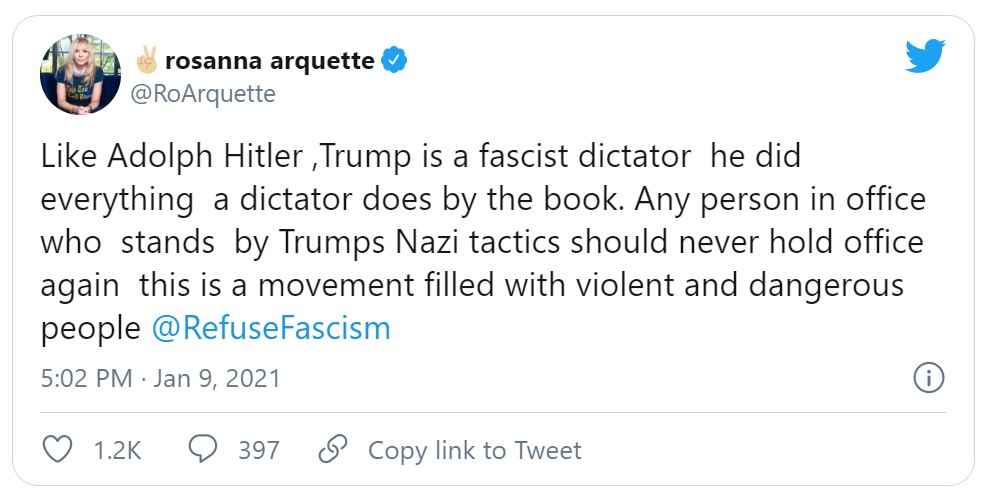 Oh look she did it in November as well:

Doesn’t have to do with Nazi Germany. But has to do with being despicable and working for the same company Carano just got fired from.

Disney rehired James Gunn after his tweets about the Holocaust, pedophilia, and rape

This is who they are

[Language warning in the image]:

Just a reminder: Disney canned Carano for an overwrought Holocaust comparison. They brought back James Gunn despite these tweets. I defended both from cancellation. Would be nice to see Gunn and co. defend Carano. pic.twitter.com/ZiUyLPjmMG

If it weren’t for double-standards, they’d have no standards.

Shout out Gina Carano. What happened to you is shameful and inexcusable. We’ve got your back. ?

Previous :If you thought the 2020 elections were chaotic, just wait
Next : Hidden cam: MI majority leader says Capitol riot a “hoax” because McConnell, GOP “wanted to have a mess”
Receive Our Free Email Newsletter