(Natural News) The past few days have been surreal, watching the corrupt propaganda arm of the Democrat party aka the media, cry in joy over Joe Biden, feel chills watching his plane land, celebrate and basically prove every word conservatives have said about them over the course of the last five-plus years.

We knew the hostility and vitriol the media perpetrated against President Trump would be nowhere to be found when they reported on Joe Biden, but this great media suck up is actually quite nauseating.

That is not hyperbole or any type of exaggeration, as readers can see for themselves below.

Those are just a few examples of what to expect over the next few years.

Some of the examples are so egregious they have even made their fellow liberal “journalists” cringe and call them out over it, such as Politico’s Jack Shafer on Thursday.

Washington’s public works department should have built an emergency system of drainage ditches, culverts and tunnels to divert into the Potomac River the torrents of praise, approval and adoration the press poured down on President Joe Biden on Inauguration Day. At one point in the early evening, citizens living in low-lying portions of the city were at risk of drowning in the flash-flood of commendations that flowed during the day-long pageant.

Shafer provided some great examples of the great media suckup in his piece titled “How About a Little Sobriety, Please?”

A more detailed list of examples found over at Daily Mail include the following:

Let me offer a reminder: It has only been three days!!!!!

It is going to be a long four years, if Dementia Joes health lasts that long, and even if it doesn’t, they will simply fawn over #HeelsUpHarris.

New York Times, did their best to try to convince people they are a non-biased and objective news organization.

Stop laughing!!!! Ok, so yeah, it is a little funny in a morbidly strange way. Note to the Times: That ship sailed years ago.

One of their senior editors, Lauren Wolfe, claimed she felt chills while watching Joe Biden’s plane landing, and then attempted to lie about president Trump, claiming he refused to offer a military plane for Biden’s use. 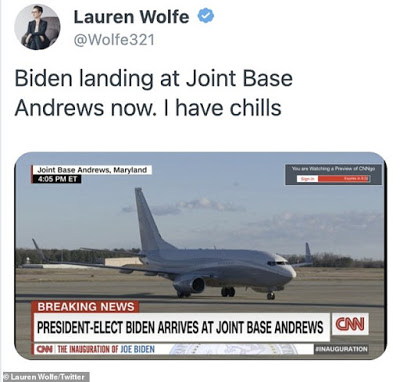 Of course those tweets were deleted when news filtered through that Biden chose to use his own plane.

So back to the NYT.  They reportedly canceled her contract despite the fact that they showed as much, if not more, contempt for President Trump during his presidency, as well as his tens of millions supporters.

Her fake news dig at Trump over the plane, brings us to another aspect of the great media suckup.

Read more at: AllNewsPipeline.com and JoeBiden.news

Previous :Gray Lady’s sad decline: New York Times shills for pharma under guise of ‘fact checking’
Next : Check to see if Instagram is forcing you to follow The White House account
Receive Our Free Email Newsletter

The great media suckup to Joe Biden is in full swing as the Democrat Party Propaganda arm nauseatingly fawns over Biden while further shredding their own credibility
Trump Derangement Syndrome turns Dems from vaccine Stalinists into anti-vaxxers as treatment nears for COVID-19
As the mainstream media self-implodes with their leftward lurch, they’re now letting the children run the daycare AKA newsroom
Conflicting statements from Chinese government regarding scope and spread of coronavirus prove Beijing’s Communist leaders are lying
Dalio: Loss of truth in media is a threat to our democracy
NY Times, Washington Post happily publish China’s communist propaganda articles in exchange for money
Russia collusion hoax COLLAPSES following Robert Mueller’s disastrous “testimony”
CDC admits HIV is exploding among transgender women… total silence from left-wing media, just like with the spread of anal cancer among homosexuals
Kavanaugh accuser Christine Blasey Ford wrote science article in 2008 on use of “self-hypnosis” to “create artificial situations”
Facebook secretly tracking “trust ratings” for users with “social score” algorithm right out of communist China