The group runs a project called OnePlanetOneChild. They posted a billboard ad in Vancouver, British Columbia with an image of a black child, accompanied by the subtitle, “The most loving gift you can give your first child is to not have another.” 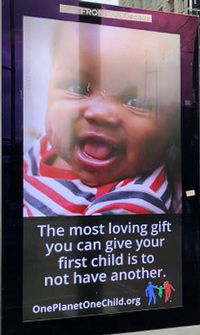 “This is perhaps the only acceptable form of racism today,” said pro-life activist Obianuju Ekeocha, who speaks up for all families, especially those in the African American community. “Take a good look at it, notice the black baby they’ve chosen to use for their population control messaging.”

Ekeocha founded the Culture of Life Africa and calls out world leaders when their abortion policies put Africans in the crosshairs for depopulation. In her book, Target Africa: Ideological Neo-colonialism of the Twenty-First Century, Ekeocha details how elitists want to depopulate the continent of Africa and take advantage of the people living there. The United Nations is busy propagating Africa with their “education programs” that promote abortion.

In a press release, the executive director of World Population Balance, Dave Gardner, proclaimed his desire to get Canadians talking about having “smaller families.” Gardner is obsessed with controlling other people’s lives. He condemns families for being selfish when they expand in size. In essence, Gardner wants control over women and their bodies, shaming women to participate in infanticide because it’s the right thing to do for the good of the planet.

“We want to get Canada talking about overpopulation. A surprising number of journalists, elected officials, and the public are unaware the world is overpopulated or uncomfortable talking about it. Many don’t realize the solution to overpopulation – and much of the environmental destruction it causes – is simply to embrace the accelerating trend toward freely chosen smaller families,” Gardner said.

The groups’ billboard ads have previously appeared in Minneapolis and Denver. Their newest ads read, “We Chose One!” and “We Chose Childfree!” The ads also target pro-life advocates, while pushing the idea of using abortion as a way to cut population growth. “Traffic congestion starts at conception,” claims one of the ads, taking a shot at the pro-life community and their dedicated efforts to empower women to make healthy choices.

Population control fanatics believe they are a supreme authority

Population control fanatics believe that the Earth has finite resources that are being depleted and destroyed by humans. They believe that human breath and energy use will ultimately destroy the planet, even though the Earth has been around for millions of centuries and survived hundreds of generations of people. As the population has reached 7 billion people, there has never been more progress in human history, with quality of life rising for millions. Human beings are capable of driving progress and being the world’s greatest resource. Family growth brings purpose, not destitution.

Population control fanatics believe that overcrowded cities are evidence that the Earth itself is overpopulated, even though there is uninhabited, undeveloped land and natural resources abounding just beyond the city walls. They believe there is a magic number of people that have a right to roam the planet. They believe they are some kind of supreme authority, constraining the rights of some while prioritizing their own selfish, greedy livelihood. Population control fanatics are of the same mindset of the Chinese Communist Party, which persecutes family growth, forces abortions, and sets limits of one child per family.

Who gets to decide who lives, who procreates and what races get to survive? Learn more at PopulationControl.news.

Previous :Facebook is now flat-out censoring Tucker Carlson… total election interference and criminal activity against America
Next : VACCINE SLAUGHTER: An estimated 500,000 sharks will have to be killed and harvested to create a coronavirus vaccine
Receive Our Free Email Newsletter