483 people have died from the coronavirus in the USA, and 187 have recovered… so far, the case fatality rate is 72%

(Natural News) As you may recall, we’ve warned that the coronavirus case fatality rates in the USA may be much higher than what’s being reported in other countries due to the extremely unhealthy American population that mostly lead sedentary, pharmaceutical-addicted lifestyles based on the consumption of nutrient-depleted processed food.

The Big Pharma-dominated mainstream media has openly attacked nutrition for decades, telling people that nutrients don’t work but drugs do. And Big Pharma has worked diligently to keep the American people sick in order to maximize pharma profits that are based on cholesterol drugs, chemotherapy, blood pressure medications and other medical scams that only produce suffering and death, not health and longevity.

Now, it seems, America is about to pay a devastating price for relying on toxic drugs while censoring and silencing the truth about nutrition and natural cures. The near-complete censorship of NaturalNews.com is indicative of a nation that has rejected nutrition and will therefore see mass deaths due to over-reliance on toxic pharmaceuticals and vaccines that rarely work. Big Tech has been part of this entire effort, too, censoring natural health websites in order to push pharmaceutical profits, because the American culture has become one of greed over humanity, where the endless quest for corporate profits supercedes any last shred of human decency, knowledge or wisdom.

If this coronavirus ends up destroying Google, Facebook, YouTube, Wikipedia and Twitter, that will at least be one silver lining from all this, as those techno-fascist monstrosities deserve to be dismantled and gone from our world so that humanity can begin to share real knowledge about natural health and natural cures without tyrannical censorship and Orwellian, anti-truth “fact checkers” who are all working for Big Pharma one way or another.

The coronavirus case fatality rate in America is, at the moment, 72%

The price the America will have to pay for this techno-fascism censorship, rejection of natural health principles and the pursuit of Big Pharma greed and rigged science may be far greater than anyone has yet imagined. 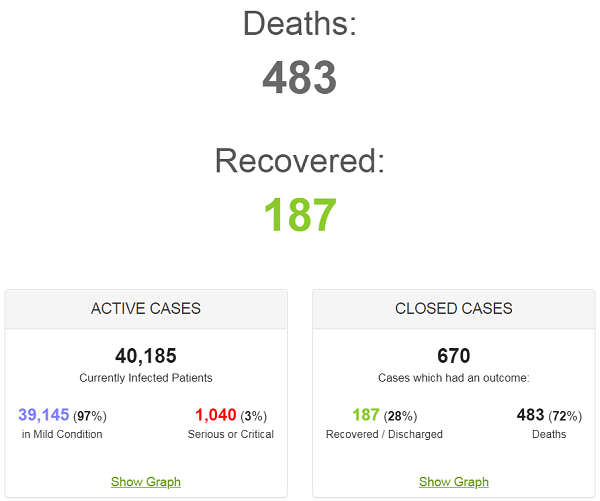 This doesn’t mean the 72% rate will stay that high, since many people are still in the process of recovering from “mild” conditions and will be released from hospitals over the subsequent days and weeks. That 72% will likely fall well below 10% at some point.

However, given the widespread immunocompromised status of the American people who are hooked on processed foods, pharmaceuticals, vaccines and horribly bad misinformation from Wikipedia, Big Tech and the lying mainstream media, there’s little question the case fatality rate in America will exceed 5%. In fact, we are probably looking at something closer to Italy’s case fatality rate of around 9%.

And that means millions will likely die, sooner or later.

Here’s how the spread is progressing across the nation. Notice that we are now at 40,855 confirmed infections. We were at half that number just two days ago, which tells you something rather horrifying about the speed of the spread of this virus.

And if you’re curious where all this is headed, just observe the shape of this quadratic / exponential curve showing US deaths: 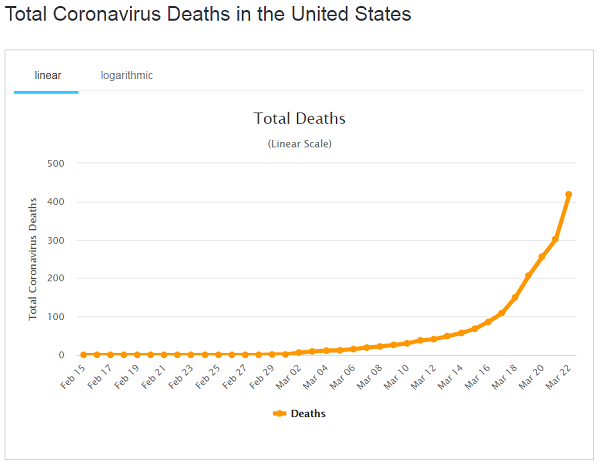 Read Pandemic.news if you want to live.

Previous :Are you ready for the “F-U-shaped” recovery? … I need another hit of my bailout money
Next : OBLIVIOUS: People are telling me they are “fully prepared” because they have 2-3 weeks of food… later this year, these people will be eating each other
Receive Our Free Email Newsletter