Prominent Democrat calls for protesters to invade, occupy and control all U.S. airports — Is she trying to start a civil war?

(Natural News) When Democratic Socialist of America member Alexandria Ocasio-Cortez defeated 10-term incumbent Democratic Rep. Joe Crowley during a New York primary earlier this month, the far-Left establishment media rejoiced, as did a few currently-serving Democrats who are right there with her at the Marxist end of the political spectrum.

This is the new face of the Democratic Party, they all said as they feted the 28-year-old political novice as some kind of conquering hero. This is who Democrats want to be now and this is the force that will drive POTUS Donald Trump from office and vanquish his supporters.

But then something happened: Ocasio-Cortez, no doubt feeling empowered by all of the outsized attention, began showing her true colors: She really is a Marxist revolutionary in the truest sense of the term. She really does want to overturn the existing constitutional order in America, and by force if necessary.

She’ll get lots of support

“We” is a growing number of Americans who have been duped (by Left-wing kooks like Ocasio-Cortez and Barack Obama) into believing they have been ‘disenfranchised’ from American society. They’ve been brainwashed by Left-wing politicians, academics, and their peers into believing they’ve been treated unfairly, cheated, denied, and subdued by the ‘predatory capitalist system’ that transformed our country in the planet’s No. 1 economy (and by a lot). This isn’t a hunch; the data bear it out. And the number of capitalism-haters is growing. (Related: No substitute for total victory.)

Sponsored solution from the Health Ranger Store: Lab-verified Nascent Iodine solution is a dietary supplement that provides your body with supplemental iodine to help protect your thyroid during radiation exposure. Nuclear accidents such as Fukushima (or nuclear war) can expose your body to radioactive iodine-131, a dangerous radioisotope. Pre-loading your system with stable iodine occupies the iodine receptor sites on your organs, causing your body to naturally expel radioactive iodine you may have been exposed to through air, food, water or milk products. This defensive strategy is recommended by nearly all health authorities, worldwide, including the Nuclear Regulatory Commission. Discover more at this link.

Is Ocasio-Cortez insane? It’s easy to dismiss someone who is calling on people to “occupy” airports; that’s not even remotely legal, given strict federal security guidelines that only got more strict after 9/11. Simple protesting is only semi-legal and even then only under certain circumstances.

But she’s not a lunatic; she’s just a committed Leftist, and those are people who tend to gin up the most trouble.

There isn’t anything that’s more likely to turn people against you and your cause than forbidding them from catching a flight or, in the most extreme instances, preventing planes from landing over security concerns. It’s like when Black Lives Matter protesters started blocking highways and bridges; even people who might have agreed with them politically were outraged because they were prevented from reaching their destinations (like work).

But crazy she isn’t, and support she’ll get. That’s what should worry us.

“First of all, ICE is not [U.S. Customs and Border Protection],” Ocasio-Cortez told Democracy Now. “When we talk about abolishing ICE, we’re talking about ending family detention. We’re talking about ending an agency and ending a practice and a structure that is not accountable to the U.S. Department of Justice, that often takes on things that look a lot like enforcement activities.”

“We have to show people that we’re willing to walk the walk and put our money where our mouth is,” she said.

This is militant Left-wing rabble-rousing at its finest. And it is very likely going to be effective over the long term as younger Democrats force the once-reasonable party into the camp of Karl Marx and Vladimir Lenin. 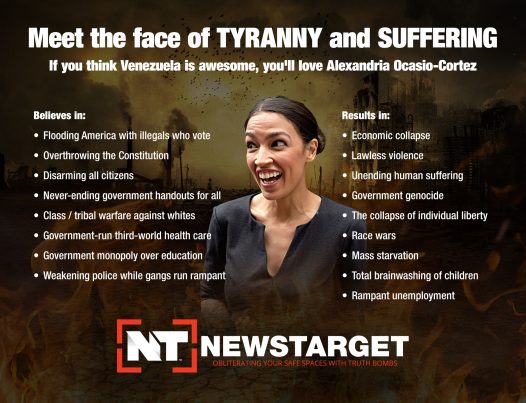 Exposed: TSA is letting illegal aliens fly on U.S. airlines WITHOUT proper documents, even as Americans are searched and humiliated at gates
What’s the dirtiest place in the airport? New study reveals surprising results
Left is now engaged in “cultural fascism” against free enterprise by barring Chick-fil-A franchises from government-run facilities
CANINE RACISM alive and well at the TSA as “pointy-eared” dogs get banned because snowflake children find them “scary”
Safe flying? Study finds airport security trays carry more viruses than toilets
Prominent Democrat calls for protesters to invade, occupy and control all U.S. airports — Is she trying to start a civil war?
Why is CNN the only “news” network allowed in U.S. airports after being caught repeatedly pushing fake news?
Time to get CNN out of the airports
How noise pollution affects your health: Study links aircraft noise with hypertension and organ damage