Calorie counting is fat-shaming, according to users of new Google map app; the feature will now be deleted due to snowflakes being “triggered”

(Natural News) The only thing worse than America’s obesity epidemic seems to be the epidemic of being offended by everything. The rise of so-called “social justice warriors” seems to have risen right along with our expanding waist lines. Recently, Google unveiled a new calorie-counting feature for their ever-popular Google Maps app — and the actually useful addition was met with nothing but hate. Apparently, telling someone how many calories they can burn walking a certain distance is now “fat-shaming.”

The new (albeit short-lived) feature on Google Maps would show you how many calories you could burn by walking somewhere. And if you clicked on the walking directions, Maps would also tell you how many mini-cupcakes those calories equated to. So, if you burned about 100 calories, Maps would say the distance you walked was equal to about one mini-cupcake. Hardly anything to cry about, yet by the amount of social media fanfare surrounding Maps’ calorie-burning feature, you’d think Google was killing a puppy for every mile a person walked.

While some were open to the new feature, a storm of angry Maps users overtook Twitter, claiming that merely being told how many calories could be burned during a walk was a form of “fat-shaming.” The Daily Mail reports one user, Ann Richard tweeted, “I truly can’t wrap my head around how thoughtless and reckless this is as an automatic feature! Especially with no intuitive way to opt out.”

Another user reportedly tweeted, “ty [thank you] for shaming me for my mini cupcake consumption google maps!”

Twitter user Megan Westgate added: ‘Anyone else feel like the Google Maps mini cupcake feature reinforces the idea that all exercise must be atonement for the sin of eating?’ 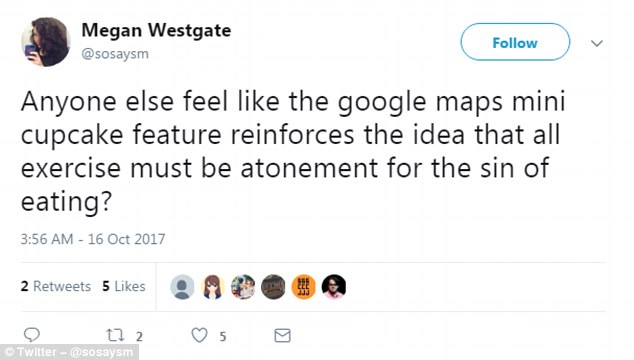 In response, Google has decided to remove the feature in its entirety. Rather than just making it easier for users to opt-out of having the calorie-burning information displayed, the tech behemoth has acquiesced to the demands of the offended — even though giving that information could have actually helped people. While there may have been some “strong user feedback” as Google says, the truth is sometimes painful. Some have even gone so far as to say that the cupcake calorie counter was “unscientific” — but that claim has no legs to stand on.

To many people, calories are just a number — it can be hard to visualize how many calories are in food as well as exercise. Putting a face (or in this case, a cupcake) on the number of calories you’re burning can be extremely helpful. In fact, studies have shown people respond better and make better choices when calorie numbers are equated to something else — such as cupcakes. Shirley Cramer, chief executive of the Royal Society for Public Health, explained recently, “People find symbols much easier to understand than numerical information, and activity equivalent calorie labels are easy to understand, particularly for lower socioeconomic groups who often lack nutritional knowledge and health literacy.”

Heaven forbid anyone under any circumstances actually becomes aware of how little exercise they’re actually doing, right? The fact that people overestimate the number of calories they burn during exercise has also been well-documented. In one study, researchers found that normal-weight men and women overestimated their calorie expenditure during exercise by between 300 and 400 percent — that is a huge difference.

Increasing awareness of how many calories you’re actually burning, combined with more awareness of what’s in your food, could in fact help people to exert greater control over their own health.

But instead of empowering people to make healthy lifestyle choices to support their well-being, Google has caved in to the hive-minded plague of offended social media crusaders. [Related: Learn more about the importance of a healthy lifestyle at Prevention.news.]

Calorie counting is fat-shaming, according to users of new Google map app; the feature will now be deleted due to snowflakes being “triggered”