Local towns are experiencing so much flooding that some are cutting off municipal water supplies.

This is on top of the power grid outages, cell phone outages, store closures and widespread road closures that have taken place here in the last 12 hours.

For the time being, everyone is on their own, with little available outside help. I’ve seen tweets of people pleading to be rescued as their homes flood, and those are the lucky ones who still have bandwidth access. Many people are completely cut off with no services at all: No electricity, no municipal water, no 911 response services, etc. As much as I want to help these people, I can’t even get to them (and neither can anyone else).

Hurricane Harvey is a strong reminder that prepping is the best insurance you can buy. While surrounding areas had no power, I cranked up my John Deere tractor with a PTO generator, providing power to my entire property for the cost of about two gallons of diesel per hour. This tractor-generator setup is virtually EMP-proof as long as you’re using an older tractor, like the one shown below. I call it the “ultimate backup generator” arrangement, and it’s mobile by design (photo courtesy of Steambrite.com) 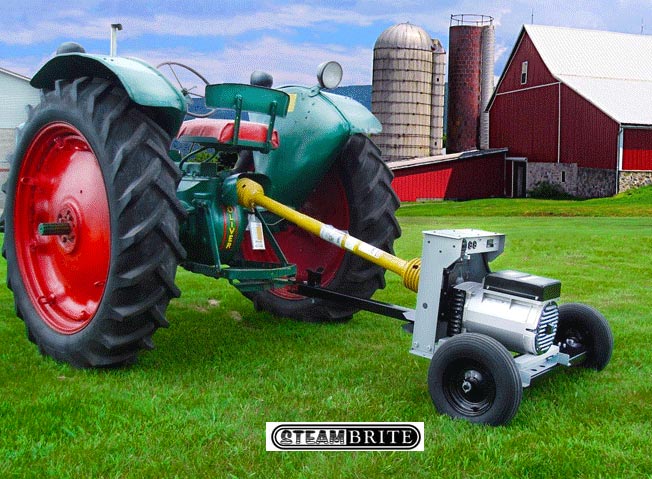 Quick list of services that have been cut off or FAILED

This is in no way a criticism of emergency response services in Texas, by the way. Governor Abbott is doing a fantastic job, and local responders are also on the ball, saving lives by the hour. Texas has a powerful spirit of survival and preparedness, and that’s why the body count has been so low, given the “end of the world” prognostications we’ve been hearing from the media.

Despite the best efforts of everyone involved, however, this storm is flat-out brutal in terms of the volume of rain it’s dropping on a concentrated area. The flooding is truly reaching apocalyptic levels, and no government, no matter how motivated, can stop a 25-foot wall of water rushing over the banks of a creek or river. (Be sure to follow more news on disaster preparedness at Disaster.news.)

With that in mind, here are some of the services that have been cut off. Let this be a reminder to everyone that in a dire emergency, you may not be able to rely on anyone but yourself. You may be cut off from help just like we’re seeing across much of Texas right now:

Despite all these failures, we’ve been just fine because we are always prepared with food, water filters, backup power, emergency medicine, self-defense firearms, radios, flashlights and so on.

The people who are hurting the worst are those who are not preppers, and many of those people think “prepping” is “stupid.”

Suddenly the tables are turned, it seems. Over about the last 36 hours, nearly everyone in Texas gradually came to realize that preppers are the real geniuses. Prepping, it turns out, is the best insurance you can buy.

Previous :Survival report from inside Hurricane Harvey: The flooding has begun… and it’s brutal
Next : “Weather wars” theorists claim Hurricane Harvey was engineered, “steered” toward Houston as a “weather terrorism” weapon
Receive Our Free Email Newsletter