9 Toxic ingredients found in your mouthwash … Are you accidentally ruining your teeth?

(Natural News) Mouthwash has been a crucial part of our oral hygiene habits for a number of years now, and in that time numerous ingredients have gone into the various brands of mouthwash lining grocery shelves. While some ingredients are relatively harmless, others aren’t. The bulk of mainstream mouthwashes are filled with unsafe chemicals and toxins that can harm your health. These include:

1. Alcohol – That tingling sensation you feel as you swish mouthwash around is often caused by this common ingredient. Alcohol is added to mouthwash to kill the bacteria in your mouth. The problem is that alcohol is too potent as an antibacterial and will destroy both the good and bad bacteria. Moreover, alcohol dries out the mucus membranes in your mouth, resulting in decreased saliva output and worse breath than before.

2. Artificial dyes – Similar to cetylpyridinium chloride, artificial dyes can stain your teeth with repeated exposure. What’s more is that the most common artificial dyes – FD&C Blue No. 1 and FD&C Green No. 3, among others – are toxic to living cells and can put an unnecessary strain on your liver.

5. Chlorhexidine – Like alcohol, chlorhexidine kills good bacteria. Instead of just focusing on bacteria in your mouth, however, this chemical may also lead to increased blood pressure and a greater risk of detrimental heart conditions.

6. Hexetidine – Also known as oraldene, this antibacterial and anti-fungal chemical is dangerous when taken in excess. Among the potential health effects of hexetidine are unstable heartbeats and allergic reactions.

7. Methyl salicylate – This chemical is typically used as an an antiseptic, and to add fragrance and flavor to mouthwashes. In its purest form, methyl salicylate is toxic, especially when ingested. Overdosing on methyl salicylate can prompt vomiting, convulsions, vision loss and even kidney failure. Just a tiny dose can be fatal to young children, so this is one ingredient you should avoid as much as possible.

8. Methylparaben – To extend the shelf lives of their mouthwashes, manufacturers will often include this anti-fungal chemical preservative as an ingredient. Because it’s a paraben, methylparaben is an endocrine disruptor. This means that it impedes hormonal processes and can boost the risk of developing illnesses linked to hormones, such as estrogen deficiency.

9. Triclosan – This widely used antibacterial agent can be found in a multitude of household cleaning products, mouthwash included. According to the U.S. Food and Drug Administration (FDA), high doses of this chemical may actually lower your thyroid hormone levels. 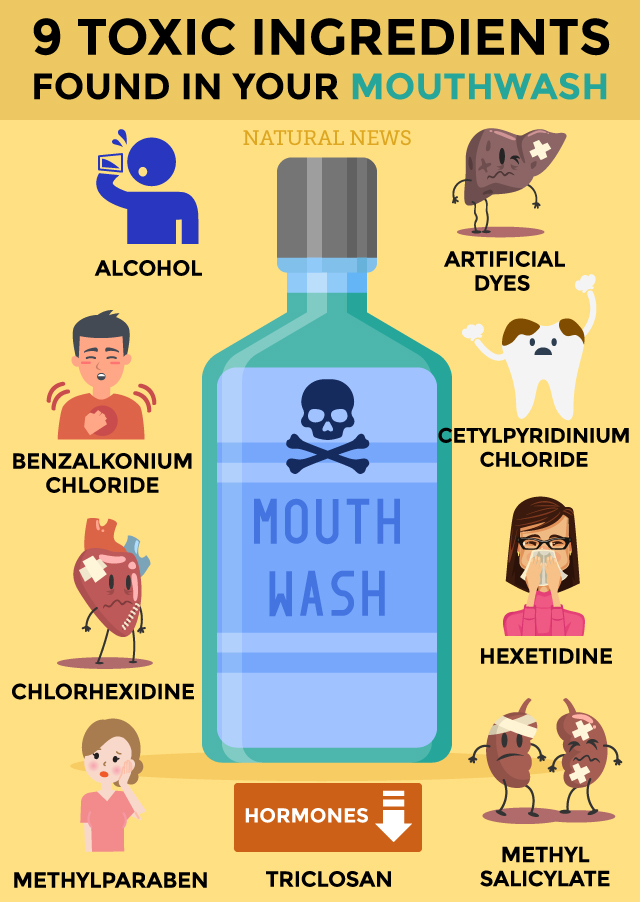 Reducing your vulnerability to these dangerous ingredients is as simple as opting for more natural ways to keep your mouth healthy and clean. Health Ranger Select Colloidal Silver Mouthwash is one such option. There’s absolutely no alcohol, artificial dyes, or chlorhexidine in this all-natural oral care product. Every bottle is loaded with nothing less than 100 percent non-GMO, bacteria-fighting ingredients such as colloidal silver, peppermint oil, and tea tree oil. These ingredients work together to clean your mouth better than commercial mouthwashes, without any of the risks associated with their common ingredients.

Previous :Fraud-proof your bank accounts with these anti-identity theft hacks
Next : The six health benefits of turmeric
Receive Our Free Email Newsletter

Stock up on these 12 healing herbs and spices that boost flavor and your overall well-being
Survival medicine: Home remedies for digestive problems, the flu and stress relief
Elderberry juice scientifically confirmed to function as a natural remedy for the flu: Study
The science behind herbal remedies: Study identifies the genes responsible for Chinese skullcap’s health benefits
Organic citronella essential oil is one of the most versatile essential oils on the planet
Which herbal medicines work against the flu? A scientific review provides answers
Boost cellular health and prevent aging with this Japanese plant
Herbs for reducing inflammation naturally
Amazing ashwagandha: 12 Health benefits of this ancient healing herb
The pros and cons of taking St. John’s wort: What you need to know