(Natural News) Welcome to the friendly skies of United Airlines, where you can pay for a ticket, take your assigned seat, mind your own business waiting for the plane to take off and then be violently dragged out of your seat by armed government goons who smash your face and humiliate you in front of everyone.

This is America in the post-9/11 era, where civil liberties have been obliterated and the sheeple have been so indoctrinated into subservience that no one came to the aid of this man who was being assaulted and kidnapped by police (see shocking videos below).

BREAKING: United Airlines has now confirmed with Natural News that its CEO will be issuing a statement on this incident.

How did this happen? Many air travelers don’t realize that airlines overbook nearly every flight, knowing that some people never show up for the flight they’ve booked. Every once in a while, a statistical fluke emerges where everybody shows up, meaning the flight is “overbooked” and somebody has to give up their seat.

So United Airlines did what all oppressive regimes do in a police state: They called in the government goons to literally rip this innocent customer out of his seat and slam his face into the adjacent seat, cutting his lip while he’s screaming and kicking. The man was a doctor who needed to see patients the next morning and simply didn’t want to give up the seat he already paid for. This is how United Airlines treats its paying customers. This is now accepted corporate behavior in the police state known as Amerika.

See the videos below:

The Courier Journal reports that United Airlines confirmed the incident:

“Flight 3411 from Chicago to Louisville was overbooked,” the spokesperson said. “After our team looked for volunteers, one customer refused to leave the aircraft voluntarily and law enforcement was asked to come to the gate.

Watch as the paying customer is screaming for help as he’s violently dragged off the plane by police:

Classic @United overbook #flight3411 and decided to force random passengers off the plane. Here's how they did it: pic.twitter.com/UaiSKz2bHD

What’s even more astonishing in all this is how obediently all the other passengers just sit quietly and say nothing (except for one courageous woman who screams at the cops), even knowing that they could have just as easily been targeted for the same treatment. 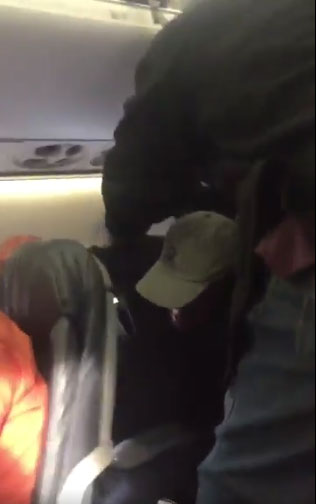 Quite literally while the police assault, badger and kidnap this paying customer, everybody just pulls out their mobile phones to record it instead of stopping the police from committing this obvious crime. Citizens are now sheeple in the American police state. Do what you’re told, even while the government assaults your fellow citizens for no reason whatsoever. 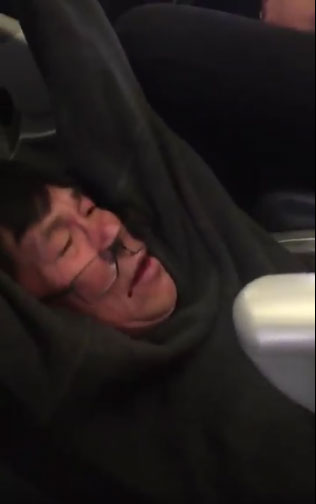 What we all now realize is that we are living in a corporate-run police state GULAG society where powerful corporations like United Airlines work in conspiracy with government goons to assault and kidnap citizens, just like in the Hunger Games. You have no rights to your own self-defense. All air travelers are disarmed by the TSA to make sure no one can fight back against police abuse inside the airplanes: 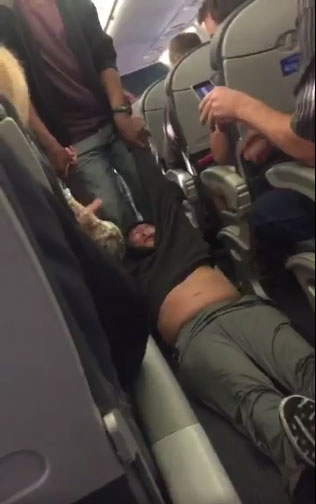 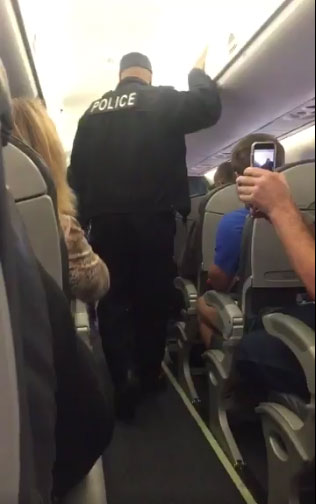 You are now nothing more than a PRISONER living in a police state society. Read PoliceState.news to stay informed while you still can.

Do I even need to say this? Boycott United Airlines. And let’s all hope this physician sues the airline for a billion dollars and wins. Maybe it’s time for United Airlines passengers to start fighting back against this insane abuse of civil liberties. Can you imagine the outcry on the Left if this randomly chosen passenger had been African-American? Would they have dragged a black woman off the plane kicking and screaming for her life?

UPDATE: United Airlines is now issuing a statement on this incident. You can find it at this link:

“This is an upsetting event to all of us here at United. I apologize for having to re-accommodate these customers. Our team is moving with a sense of urgency to work with the authorities and conduct our own detailed review of what happened. We are also reaching out to this passenger to talk directly to him and further address and resolve this situation.” – Oscar Munoz, CEO, United Airline

Previous :The astonishing TRUE story of a CDC criminal conspiracy and the international fugitive from justice who faked vaccine research
Next : United Airlines revolutionizes “hostility industry” with launch of car rental company where violent thugs rip you out of the driver’s seat and beat you for “resisting” (SATIRE)
Receive Our Free Email Newsletter

Woke tech CEO suggests company layoffs will be racially motivated, with whites being let go first
El Salvador pounces on gang violence as a cover to strip away civil liberties and imprison the innocent
Canadian government freezes single mom’s bank account after she donated $50 to the Freedom Convoy
Trudeau makes protests for whites illegal while exempting refugees, immigrants, ethnic minorities
Canadian PM Trudeau invokes emergency powers, claims anyone donating money to Freedom Convoy truckers is engaged in “terrorist financing”
Los Angeles is now a two-tiered society, and you aren’t allowed to participate unless you’re jabbed with the deadly spike protein
Hot mic catches Israel Health Minister admitting that vaccine mandates are about coercion and social control, not science or medicine
ACLU abandons its own founding principles, claims FORCING experimental medical injections into people somehow supports “civil liberties”
Vaccine passport legislation gets shut down in California as disgraced governor Newsom faces recall
In New York, you have to show proof of vaccination and an ID to enter a restaurant, but no ID is required to VOTE