(Natural News) Growing video platform Rumble, based in the US, has refused to cave to France’s demands to censor Russian news sources such as RT France and Sputnik.

Rumble has instead chosen to pull its services from France rather than comply with the order. 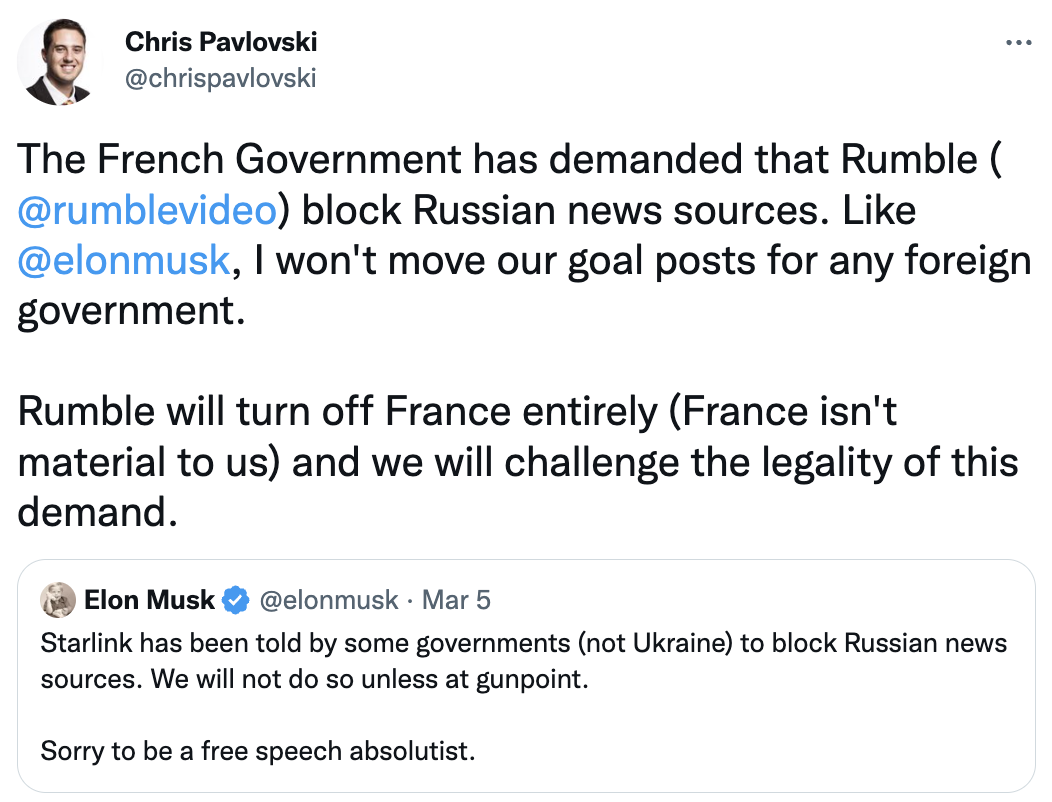 In a statement, Rumble said, “the French Government demanded that we remove certain Russian news sources from Rumble.”

Rumble outlined its commitment to free speech, adding, “As part of our mission to restore a free and open internet, we have committed not to move the goalposts on our content policies. Users with unpopular views are free to access our platform on the same terms as our millions of other users.”

Rumble said that it was disabling access to users in France while they look into challenging the legality of the government’s demands.

Journalist Glenn Greenwald, who has a show on Rumble, weighed in on the decision. “If Rumble obeyed France’s censorship order – like Big Tech firms often do – it’d mean Americans could only access voices and views which foreign governments (EU, China, Iran, etc.) permitted to be aired.”

Several months ago, the European Union (EU) imposed sanctions on Russia, including banning RT and Sputnik from being broadcast in member countries. The two news outlets were accused of spreading Russian propaganda about the invasion of Ukraine.

The channels are not allowed on television or online in EU countries. However, they have been circumventing the sanctions through online platforms that are not based in the EU.

Last month, France’s President Emmanuel Macron acknowledged the difficulties in blocking RT and Sputnik from the country, as French citizens still had online ways to access the content.

“We’re using the informational weapon and Russia was doing it even before by spreading propaganda on social networks, through propaganda channels that we have cut off on our soil but still continue to find channels to broadcast,” Macron said in an interview broadcast by France 2.

Rumble describes itself as a high-growth neutral video platform with independent infrastructure that is “immune to cancel culture” – and a platform with a mission of restoring the internet to its roots.