France in shock: 4 Algerian migrants arrested for brutal rape and murder of 12-year-old Paris girl found stuffed in a suitcase with throat slashed

(Natural News) French police has four Algerians in custody suspected of participating in the brutal murder and rape of a 12-year-old schoolgirl only identified as Lola. The suspects (Dahbia B., Amine K., Friha B., and Rachid N.) all hail from the same Algerian village, and one of them may be in the country illegally.

The body was found in a suitcase curled up, shackled, with a deep wound in her throat, and marked with inscriptions. According to the autopsy, carried out on Saturday, her death was due to asphyxiation. One of the suspects in the case have been charged with “murder of a minor under the age of 15 in connection with a rape committed with acts of torture and barbarism,” “rape of a minor under the age of 15 with acts of torture and barbarism,” and “concealment of a corpse.” Although there was no mention of sexual violence when the story first broke, the latest details from BMFTV allege the girl was also raped.

Police also say that “a device” was used to imprint the numbers “one” and “zero” on her body, but further details about what these numbers mean and how they were “imprinted” on the body remains unclear.

Lola’s father reported her disappearance on Friday because she had not returned after her classes at Georges-Brassens College, located just behind the building where she was eventually found. Lola’s mother, Delphine, went to the police station of the XIXth. The schoolgirl, with medium-length blond hair, was wearing white jeans with holes in them, a white hoodie, a sleeveless jacket and white sneakers, the report said.

The mother posted a desperate message on social media to find her daughter after she went missing, writing: ”Our daughter Lola was last seen at 3:20 p.m. in the company of a woman we do not know in our residence.” 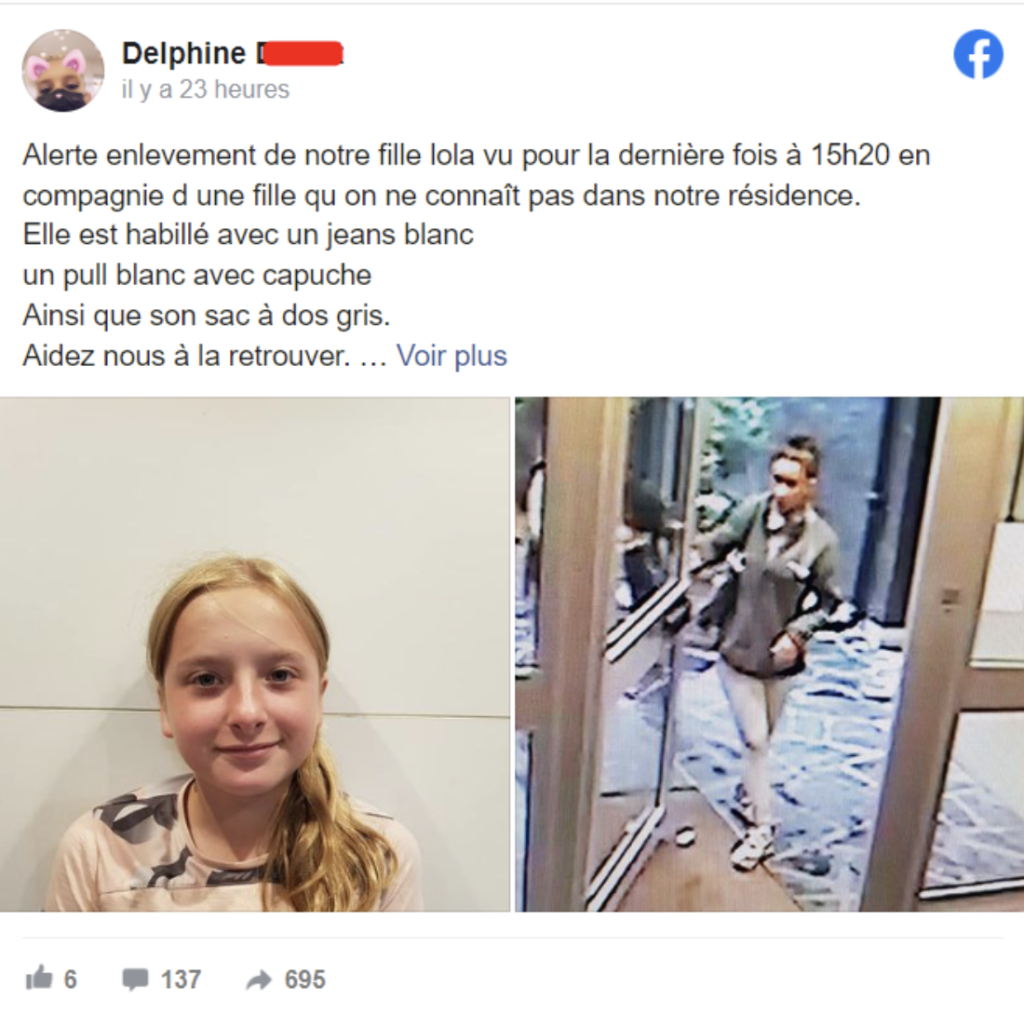 The investigators also arrested a suspect early this Saturday morning in Bois-Colombes, in the Hauts-de-Seine. It is a woman whose description could match that of a woman seen on video surveillance at the time of the crime. Another 24-year-old woman, who allegedly asked for help from a local Friday afternoon to carry a big trunk to her car, is the main suspect in police custody, according to Le Parisien. The two women in custody are sisters, and according to media reports, one of them is homeless.

The Paris prosecutor’s office stated that the 24-year-old woman raped and murdered the suspect. Police say she spoke “clearly” to investigators, apparently divulging key evidence in the case, according to BFMTV. A second suspect, in his 40s, is suspected of having helped the younger perpetrator transport the body. A second male was also arrested.

According to Le Journal du Dimanche, police are also investigating the possibility that the girl was kidnapped and targeted for organ harvesting.

In front of the girl’s building, the entrance is overflowing with stuffed animals and flowers placed there by mourners. A friend of the girl spoke with BFMTV, saying, “We were still laughing on Friday, I didn’t realize what would happen.”

Politicians across France are pointing to the fact that once again, migrants are responsible for another shocking murder and rape.

“Lola, 12, brutally murdered in the 19th arrondissement of Paris. Four Algerians in custody. Our youth is being slaughtered while professional mourners chase imaginary Islamophobia,” wrote Stéphane Ravier, senator for Bouches-du-Rhône.

National Rally parliamentary leader Marine Le Pen wrote on Twitter, “Once again, a terrible assassination. A little girl massacred in the middle of Paris. One day, it will be necessary to go to the end of the investigations to find, not only the direct culprits, but also to stop the crazy policies which make these crimes possible.”

Previous :The dam is about to burst: Whistleblower documents link Joe Biden directly to Hunter’s crooked business dealings
Next : Nothing to see here: Two performers collapse on stage, one dies
Receive Our Free Email Newsletter