Democrats are also losing more and more Hispanic voters with every election cycle. And now black voters are peeling away. Black voters are a core Democrat constituency. A loss of just ten percent of black voters, like the one shaping up in next month’s midterms, could be devastating. We can only hope.

The reasons for these losses are obvious. As Democrats seek to appeal more and more to women, most especially shrill, unhappy, bossy single women, they are turning off everyday Americans, including those who happen to be black and Hispanic. To appeal to left-leaning women, Democrats have to hate what left-leaning women hate: God, tradition, masculinity, the innocence of children, fun, America, jokes, and the nuclear family.

And so, Democrats are now the party of the elites, smugs, the wealthy, big business, the privileged, the NPR crowd, the fascist gay and green lobby, and all the smug supremacists who watch Morning Joe and need ten minutes to explain their coffee.

Above all, the Democrat Party is the party of identity politics. This means that when Democrats lose coalitions, they have to manufacture new ones, new identity groups. And this is why the left is embracing the permanent mutilation of children and morbid obesity — to create new identity groups.

Lizzo gives a keynote at the Austin Convention Center during the South by Southwest Music Festival on Sunday, March 13, 2022, in Austin, Texas. (Photo by Jack Plunkett/Invision/AP)

Think about it — In a country with an obesity problem, if you can convince enough stupid people that “obesity” is an “identity,” you got yourself a pretty large coalition (pun intended).

By pretending “obesity is beautiful” and “healthy” and “your truth,” Democrats create an immediate identity group, as well as an us-against-them narrative. “Us” being fat girls destined to become miserable, sick, and die young. “Them” being those of us who tell the truth about how obesity ensures misery, sickness, and premature death.

For the same reasons, Democrats are embracing permanent child mutilation through gender-affirming surgeries. Puberty blockers, breast removal, and chemical castration are not reversible. Democrats see this as a plus. There’s no way out of our coalition now! No way to turn back!

Most teens are uncomfortable in their bodies. Most teens grow out of this. You did. I did. But rather than giving these kids the support and, when necessary, the compassionate mental health care needed to ease them into healthy adulthood, Democrats sucker them into their “transsexual identity group.” This is done by pretending “trans” is not a mental illness but cool and trendy. 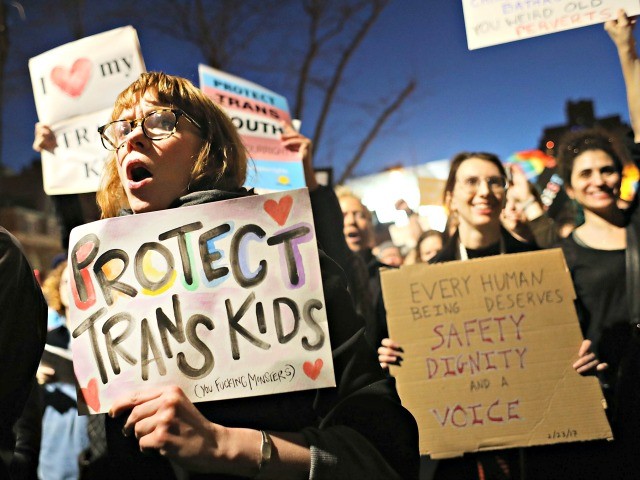 Want to be cool and trendy? Want to belong to a marginalized interest group that offers all kinds of special privileges and unearned moral authority? Tired of being judged as a white person? Lop off your breasts! Have your penis turned inside out! Take these puberty blockers!

Democrats are no better than the Nazis experimenting on and damaging people to shape society into something that ensures their Thousand-year Reich.