(Natural News) In May of 2021, the European Medicines Agency (EMA) extended emergency use authorization for the Pfizer covid-19 vaccine for children ages 12 to 15. It didn’t take long for European governments to push the vaccine onto children as young as five.

By August 30, 2022, European children had suffered through an appalling 755 percent increase in excess death. This excess in childhood mortality was not observed in 2020, during a time when governments and school systems sought to inundate children with fear, lockdowns, social isolation and forced masking. These actions were conducted under the pretense of “protecting the lives of children.” However, these totalitarian mind controls and behavioral abuses were used to coerce parents and their children to comply with an experiment – an experiment that has caused mass suffering and death.

The European Union’s official statistics department is now conducting a Europe-wide investigation into this excess death in children. This has led to some new revelations. The organization in charge of publishing mortality data, the European Mortality Monitoring Projects (EuroMOMO), altered the baseline by which excess deaths are measured, obviously in an attempt to coverup these historic crimes against children. The alteration in the baseline was reported in week 36, right after the investigation was announced. This abrupt action artificially reduced the number of excess deaths in children, making it appear as though nothing serious ever happened to children over the past fifteen months. 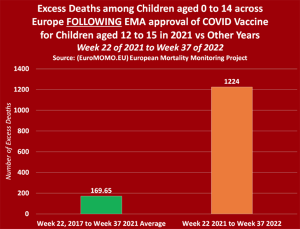 These trends continued throughout 2021, up until week 22, which is when the EMA rolled out covid vaccination for children ages 12-15. Excess mortality was recorded every week from that point forward, skyrocketing beyond the baseline normal. By 2022, up to three needless doses of covid vaccine have been made available to children 12 and over. Children as young as five have also been introduced to the two-dose Pfizer jab. As new doses of covid vaccine are pushed onto children, European governments are creating a new baseline normal of excess mortality in children.

The EUROMOMO system reports mortality across 29 European countries on a weekly basis. The system is supported by a network of organizations that have a vested interest in promoting vaccination. These include the European Centre for Disease Prevention and Control (ECDC) and the World Health Organization (WHO). After all, the EUROMOMO system was setup to “detect and measure excess deaths related to seasonal influenza, pandemics and other public health threats,” and vaccination campaigns were supposed to be the answer to these stated public health threats.

The WHO’s insistence to snuff out “vaccine hesitancy” caused many people to succumb to manipulation, coercion and physical destruction of their mind, livelihood and physical health — an attack so violent, it has breached parental rights and preyed upon the lives of an entire generation of children. The public’s blind faith in vaccination has resulted in excess mortality across the board, as children are made victims. It appears as if the covid fear campaigns were disingenuous all along, and the vaccine program was the greatest threat.

Previous :Media propaganda and “equality of outcomes” brainwashing makes people believe things that aren’t even close to the truth
Next : Largest produce market in Paris erupts in flames, as arson attacks on food supply continue
Receive Our Free Email Newsletter